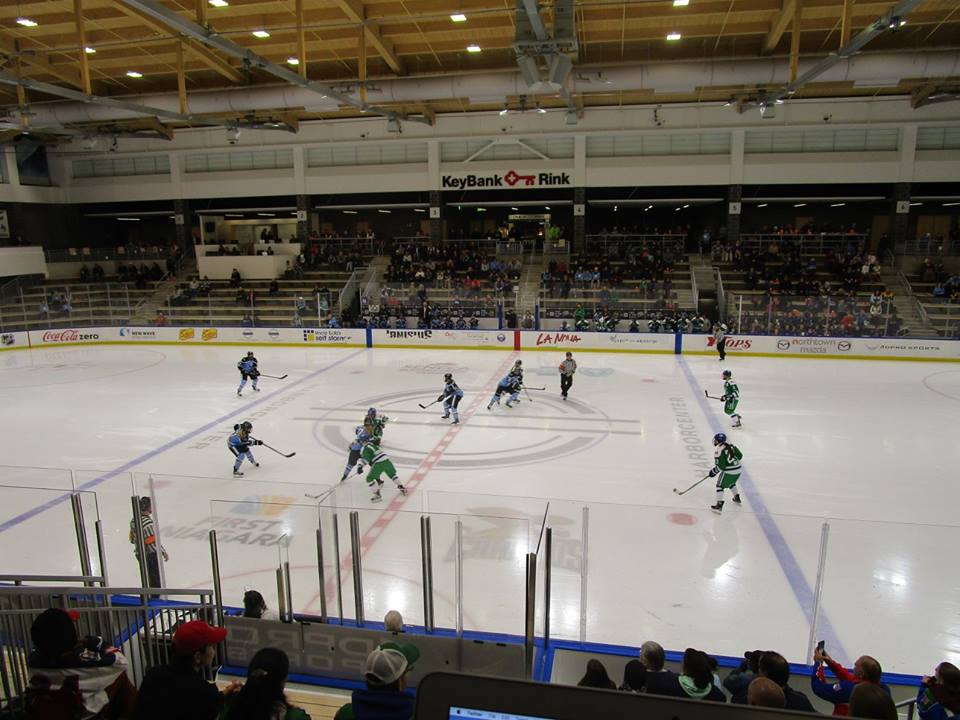 Dating back to some of their first games in franchise history, the Buffalo Beauts have been the Comeback Kids. Often finding themselves in a hole, they’ve historically been a team that can rally back, often pulling themselves out of three (or more) goal deficits often to tie, and sometimes even to win, a game.

The Beauts needed their rally caps on October 23, and although they were able to dig themselves out of an early hole, they couldn’t quite complete the comeback, as they fell to the Connecticut Whale by a score of 7-5.

There was trouble early on for Buffalo, who found themselves facing a 4-0 deficit within the first five minutes of the game.

Nicole Connery opened the scoring just 2:24 in with her second goal of the season, putting Connecticut up 1-0.

The puck had barely dropped on the next face-off when the dangerous Haley Skarupa put the Whale up 2-0. Skarupa picked up a pass from the side of the net and slammed it in from in front of Amanda Leveille. Stack and Connery earned their second points of the night with the assists.

Just 25 seconds later, a long pass to Nicole Kosta brought the puck back into the Whale zone. A quick cycle through several passes put the puck on Ivana Bilic’s stick; she shot it toward the net, and it went over Leveille’s glove after being tipped by Dana Trivigno.

With the Beauts still scrambling, the Whale weren’t done yet. Buffalo appeared to have some puck control before a battle in the corner. Connery picked up the puck, and a few quick passes made it a 4-0 game on Skarupa’s second of the night.

Just like that, the Beauts were in a quick hole — but the wild first period was far from over.

“We weren’t moving our feet, we weren’t connecting on passes. We’ve got to figure it out and change it quickly,” said Beauts rookie Emily Janiga.

Janiga got her team on the board with a deflection with under five minutes to play in the opening period. Defender Lisa Chesson notched the lone assist for her first NWHL point

Just as things were starting to settle down, the Whale struck again. A sliding pass in front of the net from Kelly Babstock gave the puck to Kelli Stack, who slid it into the net behind Leveille.

Buffalo skated off after the opening twenty minutes down 5-1, but with plenty of time to come back. They opened the second period with a change in net, as Brianne McLaughlin came in to relieve Leveille, who allowed five goals on 14 shots against.

“Just a bad first five minutes, and that gave them a cushion to sit on,” said Beauts co-head coach Ric Seiling.

Selling was on his own behind the bench Sunday afternoon, with Craig Muni taking part in the NHL’s Heritage Classic festivities out in Winnipeg.

Whether it was the goaltending change, the fact that they were down, or just a good chance to regroup during the intermission, Buffalo came out stronger in the second period.

Just under halfway through the game, Megan Bozek put out a phenomenal individual effort to bring the puck into the zone, get it back after a Whale player picked it off, and then attempt a wraparound goal from the side of the net. A quick rebound was picked up by Devon Skeats, who potted her first goal of the season to make it a 5-2 game.

Late in the second, Harrison Browne executed pressure in the zone to take the puck away from Trivigno. He got it to Shiann Darkangelo, who passed it to Kelley Steadman. Her strong shot hit the back of the net and tightened the Whale’s lead to just two goals.

Steadman wasn’t done for the night, though. She added her second goal of the night and fourth of the season in the third period. Once again, Harrison Browne came in clutch with the forecheck. Kourtney Kunichika put the puck on the net from the point, and Steadman picked up the rebound.

For about five minutes, the Whale were clinging to a one-goal lead. That is, until Jordan Brickner scored her first goal of the season to regain the two-goal lead for Connecticut.

Brickner put in a shot from just below the point and gave the Whale their sixth goal of the night. It initially appeared to have been tipped by Skarupa, which would have given her a hat trick, but the official scoring remains credited to Brickner.

Just as the Whale weren’t done scoring, neither were the Beauts. The line of Corinne Buie, Browne, and Kunichika put on some pressure, and Buie put it in on a five-hole shot, proving that good things can happen from throwing the puck at the net.

With a one-goal deficit, the Beauts pulled McLaughlin for the extra attacker. Connecticut took advantage of the opportunity, with Babstock potting an empty-netter. With that, the Whale skated off with a close 7-5 victory and are now 2-1 on the season. The Beauts are 1-2-0-1.

Despite the loss, Seiling pointed out the Beauts’ ability to hunker down when in a deficit.

“When you’re down 4-0, I’ve seen a lot of teams that can pack it in real fast, and these girls did not pack it in at all,” he said.

“It’s a learning experience… and we’d rather learn it now than at the end of the season,” Janiga said.

The NWHL now takes two weeks off for the Four Nations Cup, with league action returning November 12 and 13, as the Riveters and Beauts face off in a pair of afternoon games at HARBORCENTER in Buffalo. The Whale and Pride also face off on November 12 in Boston.