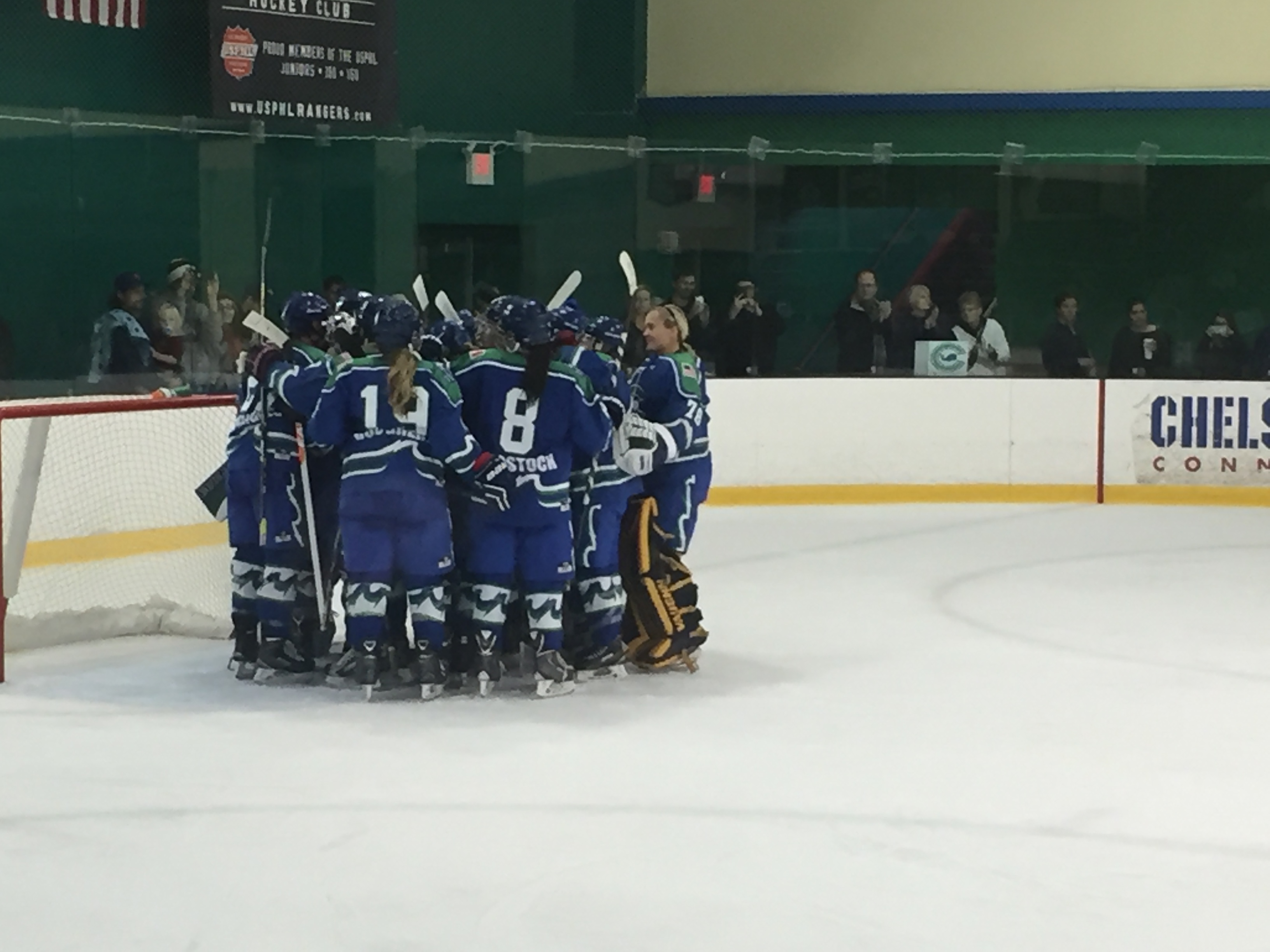 The Connecticut Whale held on to some of their offensive firepower in the offseason, but their supporting cast for next season will be a bit different.

The biggest departure is arguably that of goaltender Jaimie Leonoff, who signed with the New York Riveters. Leonoff was the best goaltender by far during the last regular season in the NWHL, and she will be missed. Instead, the Whale will rely on Shenae Lundberg and Nicole Stock. Lundberg missed most of last season with a lower body injury, and her potential in the NWHL is still a bit of a question mark. She was acquired from New York in a trade and played as the goaltender of record in just 2 games, earning the win in both and making 46 saves on 50 shots. For Stock's part, she went 4-2-0-0 while backing up Leonoff last season and posted a 0.929 save percentage. They could prove to be a reliable duo if they split duties throughout the season.

On the blueline, only two members of last season's roster remain: Molly Engstrom and Jordan Brickner. Brickner played all 18 games for the Whale last year and quietly pitched in 12 assists, while Engstrom had 3G and 2A in 15 games played (plus one suspension for a check to the head of Meghan Duggan last season). Fellow defender Shannon Doyle, who also played all 18 games last year, remains on the roster as a practice player. The Whale will be without their highest scoring player on D last season, Kaleigh Fratkin, who has signed with New York.

The Whale have also added three undrafted defenders, who are all coming off of impressive senior seasons in the NCAA, and they'll provide both offensive and defensive aptitude. Ivana Bilic is a British Columbia native coming to Connecticut after her graduation from Bemidji State, where she was named the 2015-16 WCHA Defensive Player of the Year after leading the WCHA in league play with 89 blocked shots. Kaliya Johnson comes from the almost-undefeated 2015-16 BC Eagles, where she scored 4G and 13A in 41 games. Cydney Roesler captained the Quinnipiac Bobcats in 2015-16, scoring 4G and 9A in 31 games.

Meagan Mangene, a practice player with the Pride last year and another former Boston College blueliner, also joins the Whale. Mangene only played 7 games and notched 1 assist last year, but had a strong NCAA career with the Eagles, where in her senior season in 2013-14 she led her team in blocked shots and also pitched in some power play goals.

The major returning players at forward for the Whale are Kelli Stack and Kelley Babstock. Both were dominant offensive threats who scored 22 points in 20 games, albeit with different styles -- Stack thrives off of the transition game, whereas Babstock created more consistent threats cycling down low. Both are crucial players for the Whale and represent the team's best hockey.

Sam Faber, Micaela Long, and Jessica Koizumi are also returning to the Whale. The veteran Koizumi was the team's captain last year, scoring just 7 points throughout the regular season, but providing responsible, two-way play. Long and Faber pitched in 3G/7A in 17 games and 3G/3A in 13 games, respectively.

The Whale have suffered departures up front, losing Shiann Darkangelo, the fourth-leading scorer on the team who recently made the Women's World Championship roster for Team USA, and Danielle Ward, who played all 18 games. However, the Whale will add four recent graduates.

Nicole Connery and Nicole Kosta arrive as undrafted players who have represented Team Canada at the U18 level, and they join their 2015-16 Quinnipiac teammate Cyndey Roesler. Kosta's 123 career points are the second-most in Bobcats history, with Connery right behind her for third-most in program history with 103. Both are skilled forwards who have worked together on power play units.

Haley Skarupa and Dana Trivigno are both former BC Eagles who graduated in 2016, and will join teammate Kaliya Johnson with the Whale. Both were also drafted by the Riveters in 2015 and were acquired by Connecticut via trade. Maryland native Skarupa was a 5th overall draft pick in a deep draft who scored 244 points in 144 games throughout her career with Boston College, including 79 points in 41 games during her senior season. Trivigno was picked in the next round and also scored at greater than a point-per-game pace in her senior year, with 47 points in 41 games. Both are now USA Hockey regulars at the senior level, having been part of the gold medal squads in the last two Women's World Championships.

Overall, Connecticut has kept several of the skaters that made them tough to play against last year and saw them open the season with seven straight wins. Kelli Stack returning is huge, as she is one of the best individual all-around talents in the game. The recent graduates that the Whale have added to the roster at both forward and defense are also extremely promising. Skarupa and Trivigno will be consistent scoring threats, while Kaliya Johnson is a strong option as the power-play quarterback, replacing the hole left by Kaleigh Fratkin's departure. This is a team with somewhat deeper skill than in 2015-16.

However, their goaltending situation has changed significantly. Leonoff backstopped her team in a huge way last year, earning wins for the Whale that they may not have been able to earn with a different performance in net. Stock and Lundberg are both good goalies, make no mistake, but neither emerges as the clear starter at first glance. Only time will tell if Connecticut can play better in front of their netminder, and if the Stock/Lundberg tandem can steal a few and make the Whale look as unbeatable as they did at times last year.

Connecticut suffered some scandal last year after head coach Jay Mastel resigned, followed just a couple weeks later by Whale GM and NWHL COO George Spiers. Rumors circulated about closed-door meetings and overheard criticisms. When all was said and done, the Whale replaced Mastel with former UConn head coach Heather Linstad, who resigned her position with that university in 2013 amid a federal Title IX lawsuit against the school, which included an allegation against Linstad for her treatment of a sexual assault victim on her team in 2011. While Linstad's hiring did generate some controversy among fans, the Whale continued to be one of the best teams in the NWHL with her at the helm.

The Whale's assistant GM, Lisa Giovanelli, assumed the position of general manager on March 25, and was responsible for signing all of the newcomers to the Connecticut roster.

The team previously played in the smallest home rink in the NWHL, at Chelsea Piers in Stamford, CT. Now they'll be at the Northford Ice Pavilion, which in at least one rink can seat up to 1200 people (though their press release did not explicitly say that they would be playing in that facility).

The Connecticut Whale dropped off a bit towards the end of last season, and had some real playoff disappointment against the surging Boston Pride, but they were the best team out of the gate in the inaugural NWHL season. Repeating their regular season success seems likely, and the roster is studded with proven veterans and exciting younger players. It's going to be a big year for the NWHL's Whale.