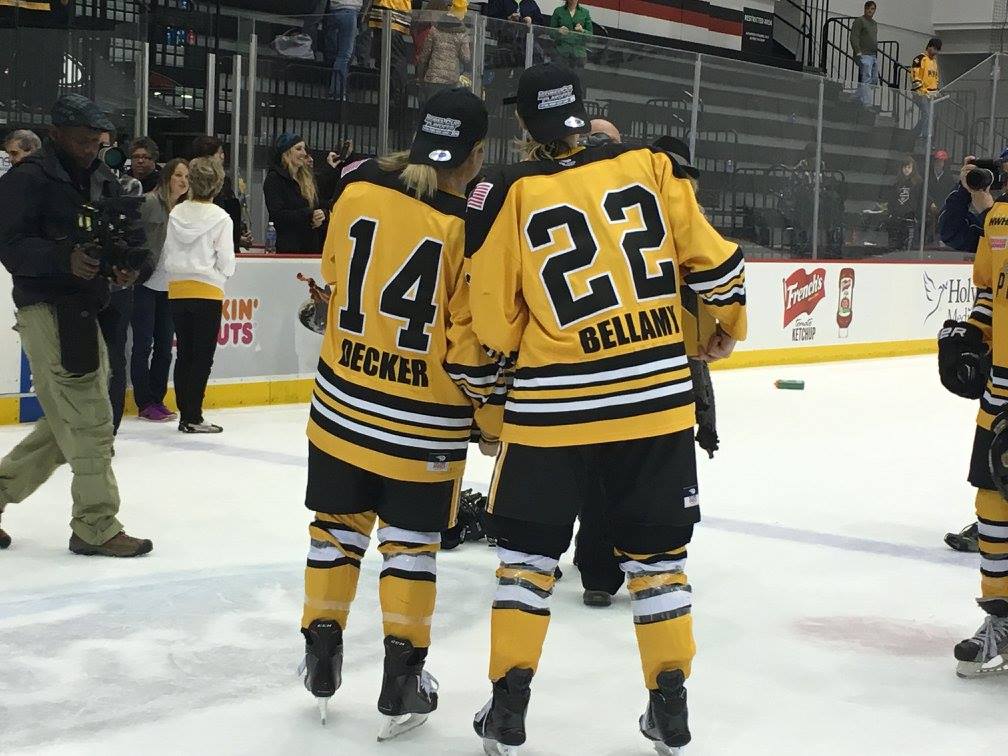 Having re-signed most of the last year’s Isobel Cup-winning team -- with just a few additions -- the Boston Pride look to be a strong NWHL team once again for this coming season.

The Pride will continue to be backed by netminders Brittany Ott and Lauren Slebodnick. Ott appeared in every game last season for the Pride, going 13-1-0 with an impressive 1.98 GAA and .925 save percentage, and will likely be Boston’s top netminder in the coming season. Slebodnick appeared in 14 games last season, playing just under 164 minutes, and allowed nine goals-against on 77 shots faced.

The Pride have four defenders returning to their team this season, starting off with national team member Gigi Marvin. Marvin was not only one of the Pride's top defenders last season, but she also contributed offensively, putting up 14 points (5-9) in 16 games. She scored three times on special teams and registered a pair of game-winning goals.

Olympian Kacey Bellamy will join Marvin on Boston's blueline, as she will return for her second season in the NWHL. Bellamy garnered more than a point-per-game last season, putting up 14 points (2-12) in 13 games. Both of her goals came on the power play, and like Marvin, she was a critical piece of the Pride’s defensive efforts.

Blake Bolden and Alyssa Gagliardi round out the crop of defenders signed to the Pride for the upcoming season. Bolden was one of just two defenders to appear in all 18 regular-season games for Boston last season; she registered nine points and added 41 shots on goal before contributing three points in four Isobel Cup playoff games.

The Pride not only have a strong defense and goaltending; they’ve also got a pretty potent offense, with many returning players and a few newcomers.

Boston College graduate and Olympian Alex Carpenter will continue to play in Boston, as she’s agreed to play with the Pride for the upcoming NWHL season after originally being drafted by the Riveters. In her four years with BC, Carpenter put up 278 points (133-145) in just 150 games and won the 2015 Patty Kazmaier Memorial Award.

Joining Carpenter on the Pride will be fellow BC alum Lexi Bender, who earned all-Hockey East honors in four straight collegiate seasons. She registered 95 points (19-76) in 154 games with the Eagles and finished her college career as a plus-164, with seven special teams goals and five game-winning tallies.

Carpenter and Bender will be the only NWHL rookies on the Pride this season, but there’s one more Boston newcomer we can’t forget: Meghan Duggan, who will join the Pride after playing in Buffalo last season.

Duggan joins the Pride in an effort to spend more time playing and training with other national team members in preparation for the 2018 Olympics. She was a huge part of the Beauts’ offense last season, putting up 16 points (6-10) in just 13 games and adding 55 shots, and now will become one of several big-name players on the Pride, as she joins her former Badgers teammates Hilary Knight and Brianna Decker.

Knight and Decker were the top two scorers on the Pride last season; the pair had a combined total of 33 points, including 29 goals. Knight led the team with 128 shots on goal and five game-winning goals, while Decker scored six times on special teams. Both went on to average 2.25 points/game in four Isobel Cup playoff games, scoring a combined 18 points (12-6). Certainly their offensive talents are more than welcome in Boston.

Jordan Smelker and Jillian Dempsey will also return to their spots in Boston’s offensive core for the upcoming season. Smelker put up 19 points (9-10) in just 17 games last season, which was good for third on the team in scoring. Dempsey registered 14 points (7-7) while appearing in all 18 games, and also registered 71 shots on goal (the third-most on the Pride).

Amanda Pelkey and Zoe Hickel are also heading back to Boston. Pelkey was fifth in Pride forward scoring last season, potting a respectable 10 points (7-3) in 16 games, while Hickel added seven points (3-4) in 15 games. Both also averaged a point-per-game in the playoffs.

Finally, Emily Field and Rachel Llanes round out the Pride's offensive roster. Field was one of six players who appeared in all 18 regular-season games last year for Boston; she registered seven points (4-3), including one game-winning goal. Llanes also recorded seven points (3-4) in 17 games and went 98-95 in the faceoff circle. Two of her three goals were game-winning tallies.

With that, a small handful of players from last year’s Pride team are not on Boston’s roster this coming year. Corinne Buie has signed with the Beauts, while a number of others’ futures are still unknown, including Kelly Cooke and Marissa Gedman, both of whom spent significant time with the Pride last year.

All things considered, the Pride once again appear to be a dangerously talented team. The additions of Duggan, Carpenter, and Bender can only help their offense, which was already a problem for other teams. Having four returning defenders, including Marvin and Bellamy, is also huge, and Ott in goal will surely round out the full team effort.

One question for Boston heading into the season -- at least for the time being -- seems to be in the front office. As of August 2, with just over two months until the season opens, the Pride still hadn’t formally announced their head coach. While it’s certainly possible that Bobby Jay will return for his second season behind the bench, nothing has been announced yet.

The other change for the Pride’s second season comes in their home rink. Last season, they played out of the Bright-Landry Hockey Center at Harvard; for the 2016-2017 season, they’ll find their home in the all-new Warrior Ice Arena, the practice rink of the NHL’s Boston Bruins (which is still under construction). In terms of seating, the new rink seats just 650, while Bright-Landry could hold over 3,000. With this rink being completely new, it will likely be an adjustment for everyone to make.

Can the Pride capture another Isobel Cup Championship? They’ll start their campaign in Buffalo on Friday, October 7 against the Beauts; then they'll face the New York Riveters the following night, who will also be in Buffalo as part of the NWHL’s Opening Weekend festivities.