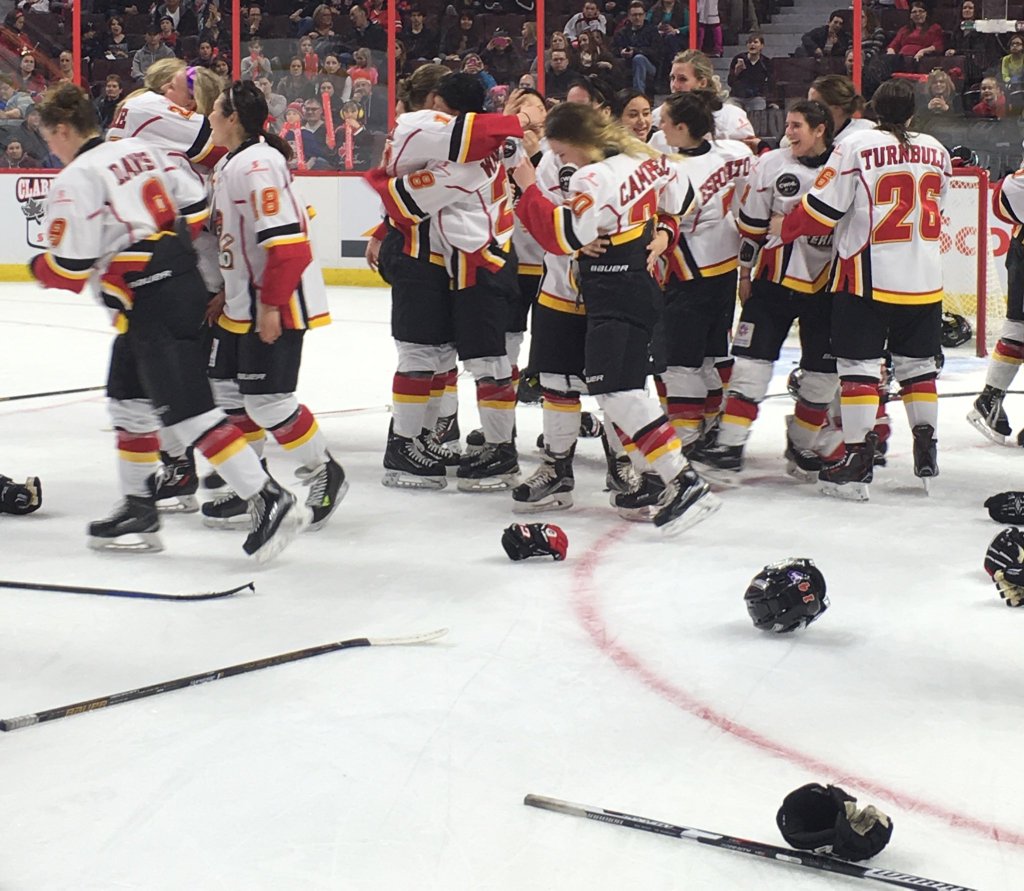 Well, no one expected a blowout. With two teams so evenly matched on paper, it would be understandable to expect overtime, much as Les Canadiennes dealt with last year against the Boston Blades. And with Charline Labonté in net and Marie-Philip Poulin on your top line, you might feel pretty good going to OT.

Instead, something funny happened on the way to the Clarkson Cup -- some new heroes emerged, many of them women who have never played at the senior level for Team Canada. But there were plenty of familiar names on the scoresheet as well.

Most importantly, perhaps, for the Calgary Inferno: getting the first goal. The game had a slow start, but the Inferno quickly showed Les Canadiennes that they came to play, taking them to task along the boards. Their strength along the boards played into the first goal; Jill Saulnier bumped Montreal off the puck and it bounced to the slot, where Brianne Jenner got it to Rebecca Johnston. Johnston fired a wrister that beat Labonté, and it was 1-0.

Poulin tied it on the power play about five minutes later, shooting it herself from the right point and then going deep to collect her own rebound, backhanding it from a tough angle past Delayne Brian to tie the game at 1-1.

The Inferno struck back on a power play of their own, as Brianne Jenner was able to tap in a cross-crease feed from Johnston. It was 2-1 in the first, and the Inferno wouldn't relinquish the lead all night.

In large part, this was because they didn't take their foot off the gas, even at the beginning of the second period when it would have been easy to let Les Canadiennes back into the game. Jessica Campbell weaved her way through Montreal defenders and right into Labonté's crease, burying the puck behind her to make the score 3-1.

Then, after Aina Takeuchi stopped Poulin 1-on-1, the Inferno were able to take it the other direction and capitalized. Takeuchi was able to get the puck to neutral ice, where Hayley Wickenheiser picked it up, and sprung Blayre Turnbull. Turnbull went in alone on Labonté, and took the puck forehand to backhand and back to forehand, making a subtle move that took Labonté by surprise. The score was 4-1.

When Noémie Marin made it 4-2 shortly thereafter, it could have been the beginnings of a comeback. But Turnbull got her second less than 30 seconds later, taking a perfect pass from Hayley Wickenheiser and rocketing a shot past Labonté to make the score 5-2. This was the point of no return for Les Canadiennes -- while they headed into the locker room after the second period still within reach of tying the game, they were clearly frustrated.

With Ann-Sophie Bettez in the box for a hook, Jessica Campbell perfectly deflected a shot by Meaghan Mikkelson to make the score 6-2. That particular deflection was not a shot that Labonté had a chance on, and coming over five minutes into the third period, it seemed particularly decisive.

But Les Canadiennes came hard, and Delayne Brian was called upon to have the finest period of her hockey career. Shortly after Campbell's goal, she slammed the door on Kim Deschênes, coming right to left quickly to stop her shot from entering the wide open cage.

Rebecca Johnston scored then off of a turnover (unfortunately created after Julie Chu fell down at her own blueline), and it was 7-2. Deschênes challenged Brian in her crease and took a feed from Bettez, wristing it five-hole to cut the lead to 7-3. But the momentum didn't shift in Montreal's favor, thanks to Brian again: she made a glove save on Bettez who was bearing down to her left, and had the puck marked for the opposite corner.

That save was important -- not because it saved the game (it didn't), but because it kept the situation under control for Brian's team. It was emblematic of the Inferno's work ethic through 60 minutes to keep one of the most talented rosters in women's hockey from pushing their way back. It was a lopsided score, but Calgary didn't give them an inch -- they kept the remainder of shots that Montreal had largely to the outside, and despite taking a penalty, they were able to get the puck to the empty net thanks to captain Brianne Jenner. The final score was 8 to 3.

As the clock ticked down, every player on Calgary's bench was jumping up and down as the feeling set in that they would be raising the Clarkson Cup for the first time in franchise history. The Inferno have come a long way since being at the bottom of the league, winning just 3 games total in the 2012-2013 season. Some holdouts from that squad, like Meaghan Mikkelson, Kelsey Webster, Erica Kromm, and Kathy Desjardins, had the honor of raising the Cup tonight.

"I have absolutely no regrets about my preparation for this game," said a crestfallen Charline Labonté to the media. But both she and Les Canadiennes came up short.

The Inferno got the goaltending and the offense that they needed to steamroll a team that was heavily favored coming into this pivotal game, and they raised the first Clarkson Cup to ever be awarded on NHL ice to a crowd of over 4000 hockey fans.

Check back soon for more quotes, pictures, and analysis from the Clarkson Cup Final.