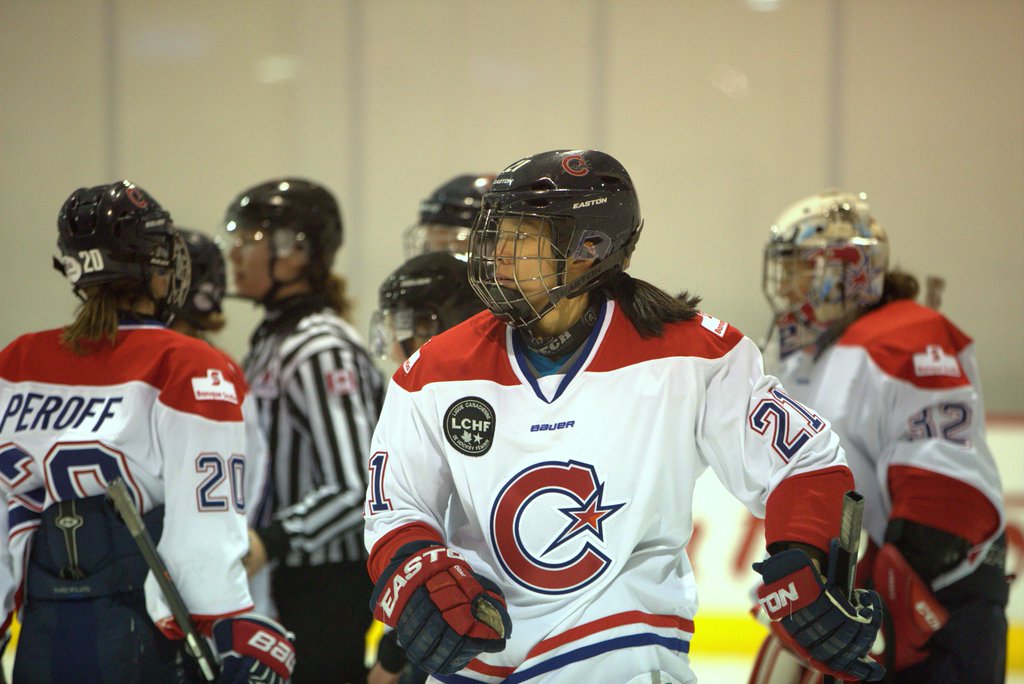 The CWHL Clarkson Cup championship, which will be determined in a one-game matchup, features the Calgary Inferno and Les Canadiennes -- two teams who have fought for the top all season long.

Les Canadiennes and Calgary share a few similarities, from their depth to their powerful, nightmarish offenses. Les Canadiennes finished with a slight 4-2 advantage in the season series, which featured two splits and a series sweep from Les Canadiennes.

In a series between two offensive and deep teams, the key to this series may come down to defense and goaltending.

Les Canadiennes defeated Toronto last weekend in a series sweep, winning 5-1 and 7-1. Caroline Ouellette had eight points in the sweep, while Marie-Philip Poulin had seven and Ann-Sophie Bettez had five.

"We know that Calgary has very fast forwards as well, so we’ll be under pressure for the breakouts and the zone coverage," Breton-Lebreaux said.

"Against any team that’s really fast, I think what’s critical is that 200 feet away from the zone, on our forecheck, making sure that we’re solid in that area," Les Canadiennes defender Julie Chu said.

"The better we are in the forecheck and being able to maybe clog up space, be able to pressure their players so they’re not making passes maybe as crisply as they want. That’s going to help slow down their attacks and it’s going to allow us to maybe turn over some pucks more in the neutral zone or high in the defensive zone and then transition to hopefully get onto the offense a little bit more."

Les Canadiennes finished first in the CWHL with 42 points after winning 21 games. Les Canadiennes also just had three losses -- including two against Calgary. Les Canadiennes had the top four scorers in the league, led by Marie-Philip Poulin and her 46 points (23G, 23A).

"It’s great to have all-star athletes such as Caroline Ouellette, Marie-Philip Poulin, and Julie Chu," Les Canadiennes goaltender Charline Labonté said. "But sometimes a challenge is when you get too many all stars, sometimes it doesn’t work together. It’s hard to put together because they’re so good or the play becomes a little bit individual.

"But I think for us it was completely opposite that we were able to stick together, play together and we have four good lines, Everyone can score. It’s just like it’s something very very special that we have with Les Canadiennes... We’re like a big family and we really do care for each other."

Labonté led the league with .925 save percentage but has faced very few shots this season.

“Labonte, she’s a phenomenal goaltender. If she’s on her game, we’re going to have to be two games above her," Calgary's Lovell said.

"She can stand on her stand and she can make or break it for them. They also have a great defensive core and their forwards are just amazing as well."

While Calgary entered the season with the best, deepest roster on paper, Les Canadiennes now have two powerful scoring lines and many experienced players.

"They’re a little bit older than our team, they’ve all been around, they’ve all played at a higher level," Calgary coach Scott Reid said. "They’re all very competitive, they do not quit, they’re very well coached. They’re just a very hard-working team. They have some great talent especially up front; on the back end, they have great [defenders] and a world-class goalie."

The Inferno defeated Brampton in the semifinals, winning 4-2 and 4-3. Rebecca Johnston, who recently returned from injury, had five points in the sweep, while Calgary's Delayne Brian had a .890 save percentage

"We just stuck together," Reid said. "The game is about riding momentum. You’re going to have good and bad momentum throughout the game and I felt our [players] were able to stay positive, stay upbeat with one another and ride through those momentum swings. That enabled us to get the job done.”

The Inferno finished eight points behind Les Canadiennes in the regular season standings with 16 wins and six losses. Delayne Brian had a .890 save percentage during that time frame as well, as Calgary's starter.

"We’ve definitely had some bumps, but right now I think is going to be our prime," Lovell said. "I think that’s our team’s really come together pretty [well], so I’m really excited to play with them this weekend.”