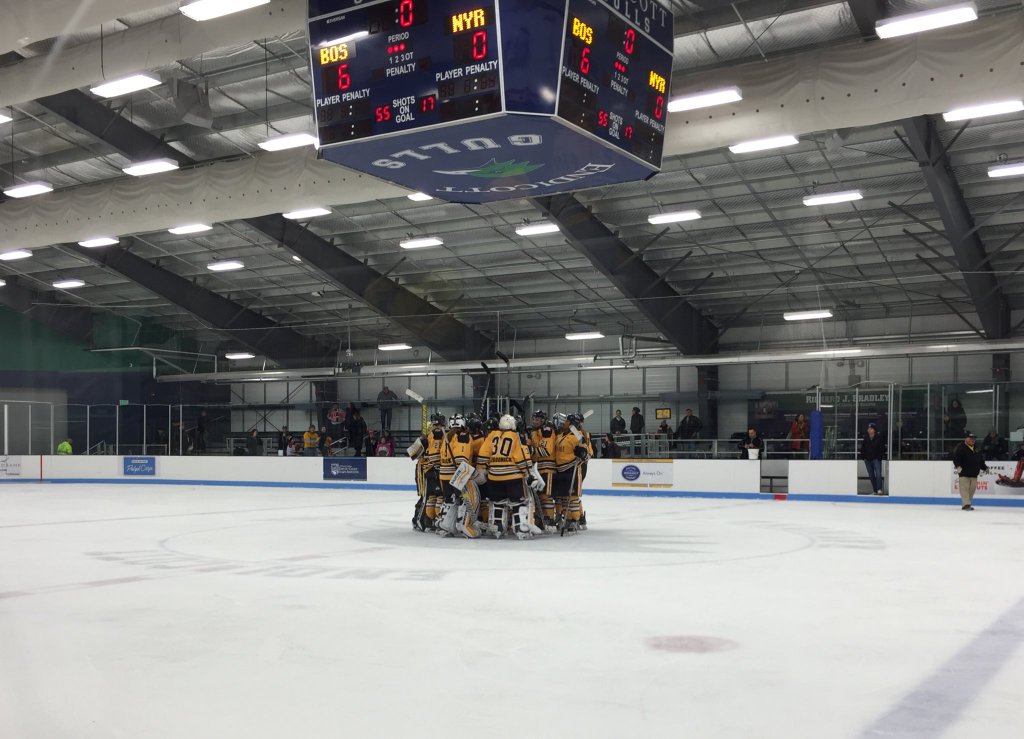 The two games between the New York Riveters and Boston Pride in Beverly, Massachusetts this weekend went mostly as expected. The Riveters were shut out by the Pride on Friday night by a score of 6 to 0, and Boston was credited with a total of 56 shots on goal. Jenny Scrivens had 50 saves in the loss, getting the start over Chelsea Laden, as Nana Fujimoto was sidelined with an apparent illness.

En route to their win in Game 1, the Pride scored three goals on the power play and three goals at even strength. After watching each goal, the reason for the score became apparent -- the Riveters did very little to insulate Scrivens from shots coming both from the middle of the ice and from the circles. The offensive zone opened up for the Pride, who were able to waltz in and get quality scoring chances seemingly at will. It was a disappointing refrain for the Riveters, who performed defensively much as they had in their last few games of the regular season against Boston. With that much space available to players like Hilary Knight and Brianna Decker, it's very difficult to prevent scoring chances.

Zoe Hickel and Amanda Pelkey also pitched in goals of their own, while Jillian Dempsey had three assists and also scored the sixth goal. The depth available to the Pride in this game would seem to be an embarrassment of riches, and while New York has many talented players of their own, they weren't going to stop Boston's transition game without playing tight and aggressive hockey.

However, the Riveters were able to threaten a comeback in Game 2. Down 2-0, Madison Packer cut the lead in half with a tough angle shot on the power play, and shots were 17-12 Pride in the first period as teams traded chances. Nana Fujimoto was back in net for the Rivs, and things seemed to be looking up for the team. Jillian Dempsey scored in the final minute of the first period, though, to bring the score to 3-1.

In the second period, things got interesting on the scoresheet. Blake Bolden and Hilary Knight scored (chasing Fujimoto in the process and seeing her replaced with Scrivens). While Kiira Dosdall added another PPG for New York during a short 5-on-3, Boston was able to negate that almost immediately with a shorthanded goal by Brianna Decker. Still on the power play, though, New York got another (credited to Lyudmila Belyakova on a tip from a Gabie Figueroa shot), bringing the score to 6-3. It was a wild period, and after it, New York would have to be perfect defensively if they wanted to keep hope alive for a tie. They had still been outshot 20-6 in that second period, according to the official scoresheet.

The third was even better, but Scrivens was still tested frequently, and New York had difficulty creating scoring chances. When Celeste Brown scored with three minutes to go in the game, capitalizing on a loose puck in front of Brittany Ott, it seemed like there might be plenty of time left to score two more goals, as Boston had started to get sloppy defensively and in terms of discipline as the period had gone on.

But Hilary Knight would dump the puck into the empty net vacated by Scrivens from the blueline to bring the score to 7-4. It was a tough loss for the Riveters, who gave the game everything that they had, and probably could have seen a few more calls go in their direction despite the fact that Boston was penalized 8 times in the game -- the same amount as New York.

It was a rough and tumble example of playoff hockey, with plenty of great moments for role players and third- and fourth-liners. But Boston's skilled players made a big difference; they got multiple goals from their blueliners and the Riveters were unable to shut down Hilary Knight and Brianna Decker, who combined for four goals, including Knight's hat trick.

The Riveters have a lot to be proud of in their inaugural season, but their wish list for the offseason likely includes some defensive help and potentially a coaching change. They have several skilled forwards who are having difficulty making themselves visible in big games, largely because the work being done by the defense to create zone entries isn't satisfactory against teams that are playing tight systemically in the neutral zone to stop them.

Give the Riveters open ice, and they'll enter the zone, drive to the net, and score big goals. But their X's and O's never really came together this season to create that open ice as a matter of habit. Instead, they ceded open ice to their opponents too easily, and allowed a lot of shots on their goaltenders. So much of what led to the Riveters' losses this season happened at and between the bluelines, and the mismatch and lack of cohesion for the Riveters was especially apparent here.

The Pride will move on to the Isobel Cup Finals for a best of three series against the Buffalo Beauts, who came together at the right time to beat the Connecticut Whale twice in a row after not winning a game against them all season. They did beat the Pride once, in overtime, back on January 3. It should be three games to remember -- and yes, it probably will go to three.

Melissa Kania (@melissakania) and Jashvina Shah (@icehockeystick) will bring you coverage of the Isobel Cup Finals from Newark, New Jersey. The games are being held at the Prudential Center practice facility, which is used by the NHL's New Jersey Devils.