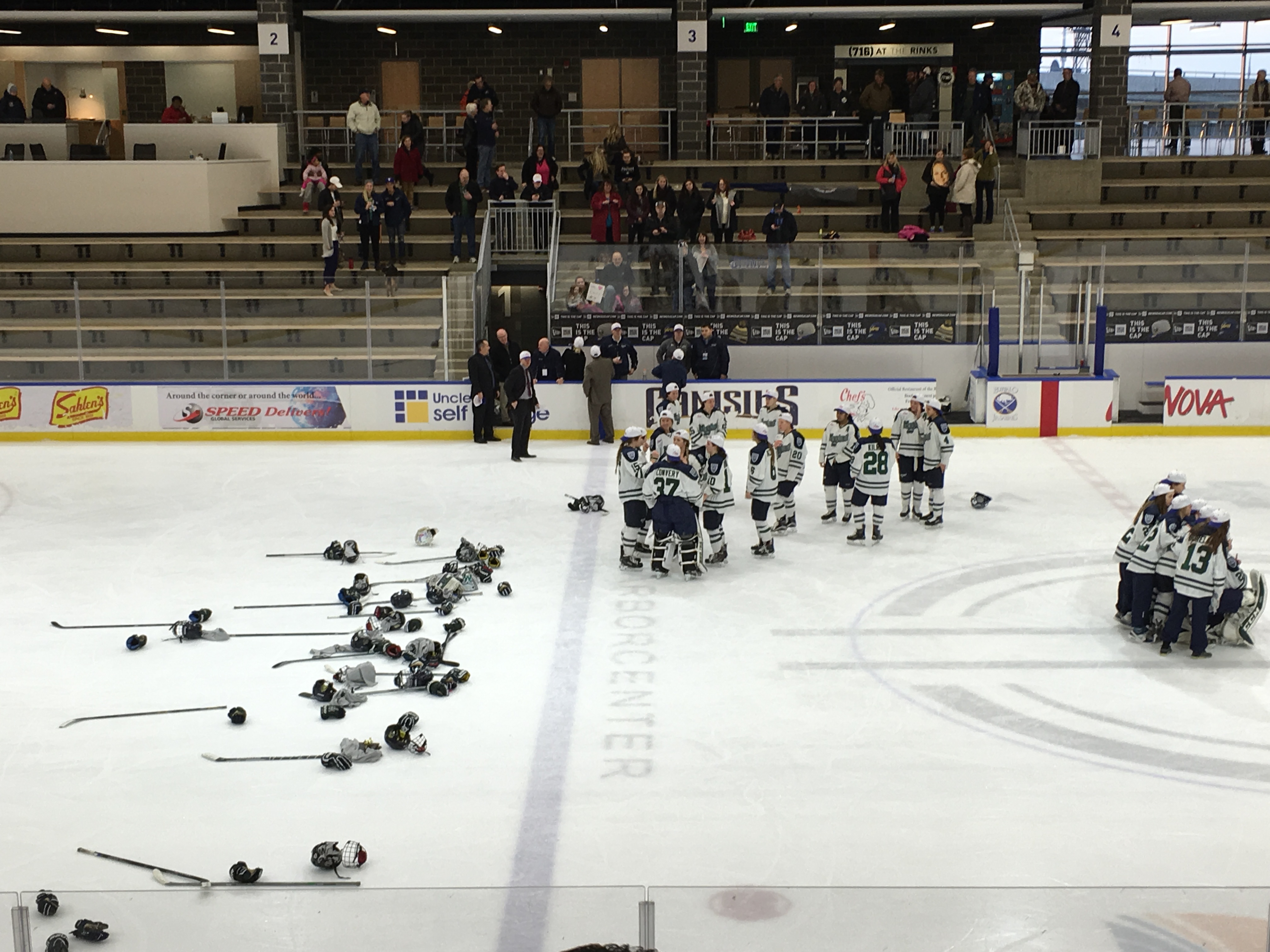 It took a little bit of extra hockey, but eventually, the Mercyhurst Lakers defeated Syracuse to capture the 2016 College Hockey America Championship on March 5 at HARBORCENTER in Buffalo, NY.

While the championship game was undoubtedly a great one, perhaps the real story came the day before, in the semifinal matchup between Syracuse and Penn State. That game required not one, not two, but THREE overtime periods to be decided -- a total of 116:10 of hockey and nearly two full games.

In the end, it became the longest game in CHA history.

It was thrilling, nerve-wracking and exhausting -- and I was in the stands watching, so I can only imagine how the players felt. With the score tied at two after sixty minutes, the teams headed to their locker rooms for intermission before the first OT kicked off. Syracuse came out running in the first overtime, outshooting PSU by a margin of 12-2. It was all Syracuse, who had plenty of great chances and lots of zone play, but just couldn't seal the deal.

The game's second overtime period was much more evenly balanced, with shots at seven aside and good end-to-end play for both teams. As things headed to a third OT, you started to wonder. The players were getting tired and it's at that point that you know, eventually, someone's going to miss their mark and a goal will come sooner or later.

But as that third overtime period went on, the question became more of "Is this REALLY heading to a fourth?" Alas, with just 3:50 remaining, Syracuse sophomore Stephanie Grossi put it top shelf for the game-winner to send her team to the CHA championship.

Alysha Burriss registered two assists in the semifinal, including a helper on the game-winning goal. In the end, Syracuse outshot Penn State 64-42.

Both Syracuse goals in regulation came from defenders, with Megan Quinn and Allie Munroe each scoring in the second period to put the team up 2-0.

Penn State's Bella Sutton and Laura Bowman tallied quick goals, including one on the power play, to even the game in the third period. It was then over 70 minutes before another goal (the game-winner) was scored.

Meanwhile, Mercyhurst had earned their spot in the CHA final with a 4-2 victory over Robert Morris earlier in the day on Friday. The Lakers went 3-for-5 on the power play, which was the key to their victory.

Emily Janiga had a goal and an assist for Mercyhurst, putting her team up 1-0 in the first period before RMU's Amanda Pantaleo tied things up in the second period. But just 1:43 later, the Lakers went ahead on Brooke Hartwick's power-play tally.

Jenna Dingeldein then added another power-play goal, the Lakers' third of the game, to give Mercyhurst a 3-1 lead.

Both Janiga and Dingeldein are draft picks of the NWHL's Buffalo Beauts.

Ashley Vesci closed the gap two just one goal with a power-play tally for Robert Morris with 3:51 left in regulation, but Mercyhurst held on, also adding an empty-netter to seal the victory.

With those wins, Mercyhurst and Syracuse headed to the CHA Final on Saturday afternoon, with the Lakers eventually coming out on top to capture their first CHA Championship since 2013.

However, it was a close battle, especially at the end, as Syracuse scored twice in the last three minutes of regulation to force overtime.

The biggest question entering Saturday's game was: how tired would Syracuse be after essentially playing two games on Friday night? It's also interesting to note that Syracuse's coach only dresses 16 skaters, not the maximum of 18, which puts even more of a toll on the players.

If Syracuse was tired, it didn't show. They had a strong first period, and Grossi scored her second of the weekend to put her team up 1-0 on a nice wrist shot.

But soon after, Mercyhurst had a great chance on a 5-on-3 and tied the game at one. They added another quickly and went up 2-1 in a huge stretch that significantly shifted the momentum heading into the third period.

Rookie Rachael Smith made it 3-1 less than a minute into the third, catching Syracuse netminder Jenn Gilligan out of position. The Lakers held onto the lead for much of the third, but Syracuse scored two quick ones near the end to force overtime. Munroe and Burriss helped Syracuse get to extra time.

This time around, it didn't take triple overtime for a decision. Jenna Dingeldein scored the tournament-winning goal for Mercyhurst with just 4:54 left to play in the first overtime. She was later named CHA Tournament MVP and was also named to the All-Tournament Team, as the Lakers now head to the NCAA Tournament.