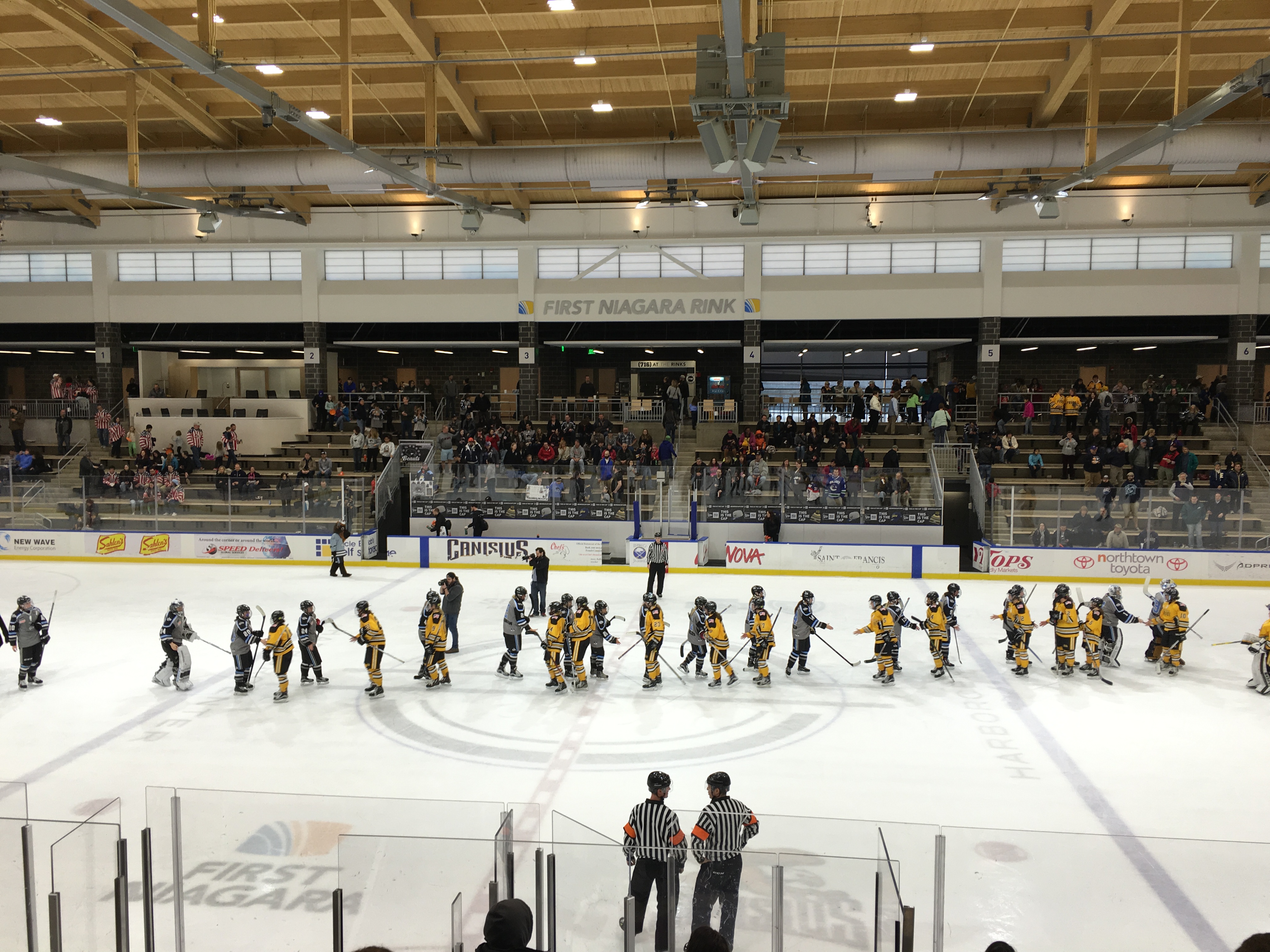 A fairly-evenly matched game between the Buffalo Beauts and the Boston Pride eventually resulted in a 3-2 Pride win to cap off the NWHL regular season for both teams.

For at least the first forty minutes, it was a pretty even game. Despite Boston being the top team in the league, the Beauts didn't seem to have any trouble finding their legs and keeping up. Both teams presented strong defensive efforts, which limited the chances on both ends, and effective goaltending on both sides kept scoring to a minimum.

After twenty minutes, there was no score on the board, and the shots were a close 11-10 in favor of Buffalo. Both teams had chances in the opening frame, including a spectacular shorthanded break by Buffalo's Hannah McGowan and a fantastic chance by the Pride that was narrowly kept out of the net by "the goalie" Emily Pfalzer.

As the second period began, so did the scoring.

With the fire alarms blaring in the rink -- due to a malfunctioning popcorn maker, it turned out -- the Beauts got on the board, thanks to Hailey Browne.

Browne notched her fifth goal of the season on a slapper from the top of the face-off circle. The puck found its way through several players, behind Brittany Ott, and into the back of the net to put Buffalo up 1-0.

That lead didn't last long, however, as Corinne Buie tied the game just moments later on a goal close in front of Brianne McLaughlin. After a Pride player shot the puck from the top of the face-off dot, it appeared to get redirected and slid in behind the Beauts netminder.

A short time later, the Pride took their first lead of the afternoon on Brianna Decker's 14th goal of the season. Decker and Hilary Knight combined some excellent work down low for the goal. After Knight took a shot from the side of the net, McLaughlin let up a rebound; Decker picked it up, and though McLaughlin tried to get into position to cover, the Pride found themselves up 2-1.

Before the second period was over, however, Buffalo would tie things up on Meghan Duggan's sixth goal of the season. Duggan knocked the puck out of midair right in front of the net with a softball-like swing to put it behind Ott.

Again, things remained close through the first two periods, with shots tallied at 25-23 in favor of Boston.

"Having a pretty close game into the third period, we knew they were going to bring it," McLaughlin said.

The Beauts struggled a bit in the third, as they were credited with just four shots on goal in the period. Boston was credited with nine, and of course, the game-winning goal, which came at the hands of Jillian Dempsey.

The power-play goal was scored after an Erin Zach interference penalty; with just seven seconds to go in the 5-on-4, Dempsey potted the goal from in front of McLaughlin to break the tie.

The Pride held on for the 3-2 victory.

One key point in Sunday's game for the Beauts was defensive-zone play, which McLaughlin says is the most important part of the team's game.

"I think that's something we've gotten better at throughout the year," she said.

McLaughlin added that although it took time for the players to get used to each other, communication helped to build chemistry as the season went on.

The Beauts close out the regular season third in the NWHL with an overall record of 5-9-0-4. The Pride will finish at the top of the league, with a record of 14-3-0-1.

The Pride now prepares to host the NY Riveters in the Isobel Cup playoffs while the Beauts will hit the road to face the Connecticut Whale. Both are best-of-three series beginning on Friday, March 4. Look for a full playoff preview of the Beauts-Whale series later this week here at The Victory Press. Click here for a preview of the Pride-Riveters matchup.