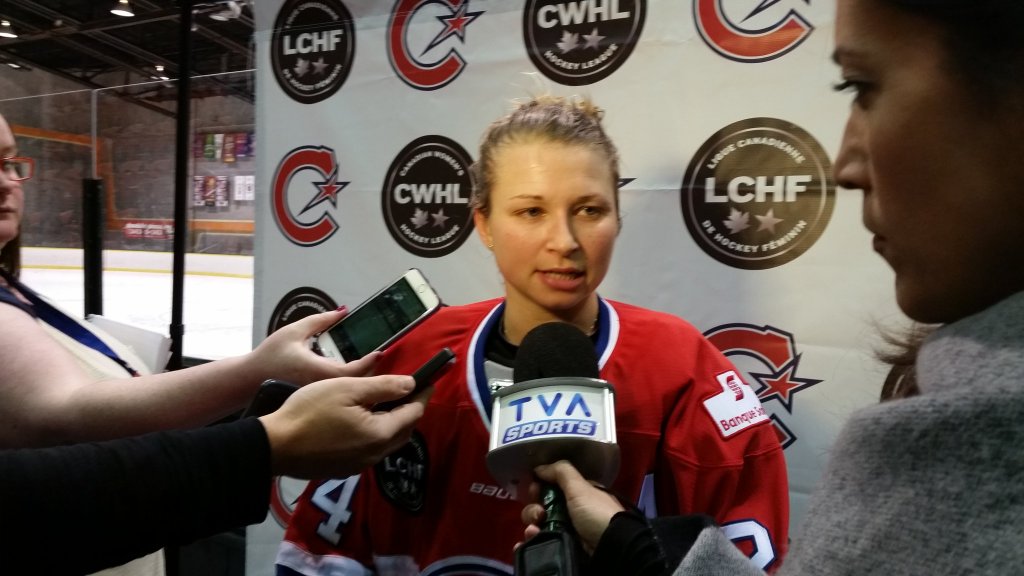 When Les Canadiennes began the season, they blistered through opponents with their top line of Marie-Philip Poulin, Ann-Sophie Bettez, and Caroline Oullette.

As the season progressed, the coaching staff moved Caroline Ouellette down to the second line and placed Kim Deschênes on the top line.

"It was working super well with Caroline, but now having Caroline on the second line [gives] us two power lines instead of one, or two very good lines," assistant coach Lisa-Marie Breton-Lebreux said.

But the production for Les Canadiennes' line of Poulin and Bettez -- now paired with Deschênes -- has still been the top in the league.

Poulin and Bettez lead the CWHL in scoring and both have passed the 40-point mark. Deschênes is third in the CWHL, while Ouellette is fourth; the first non-Montreal player in the scoring race is Toronto's Natalie Spooner, in fifth place.

"They’ve been shooting the puck a lot," Breton-Lebreux said of Poulin and Bettez. "We’ve been asking them to shoot and I think they complete each other pretty well with Kim Deschênes in there... They’ve been sticking to the game plan, I think, and just shooting when it’s time to.”

With 44 points, Poulin won the Angela James Bowl as the league's leader in scoring.

“It was teamwork all year long and I was lucky enough play with amazing [players] all year, and I think we push ourselves to be better every day," Poulin said.

The line was especially productive last weekend during Les Canadiennes' sweep of the Blades, when its members combined for 24 goals.

The trio helped Les Canadiennes earn a season-high 11-game winning streak this season and first place in the CWHL playoffs. With the top seed and home ice advantage, Les Canadiennes will host Toronto in the semifinals.

“We’re more a family, we want to play for each other," Poulin said.