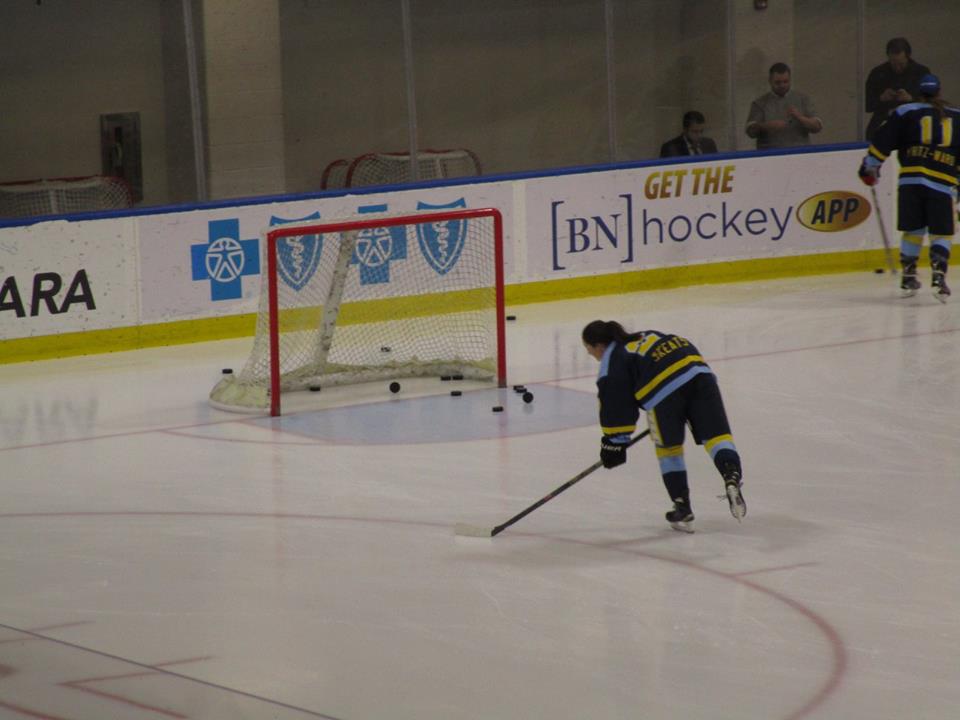 “I always want to leave the rink knowing that I left everything I had on the ice.”

That’s the philosophy by which Buffalo Beauts forward Devon Skeats takes her days, and it seems to be exactly what she’s done so far in the NWHL's inaugural season.

After missing the first few games of the season due to visa issues, Skeats has absolutely roared on the ice for the Beauts, averaging just shy of one point per game.

Her nine goals are second-most on the team only to Kelley Steadman, while she’s also added three assists this season for 12 points in 13 games.

Skeats has also registered 54 shots in those 13 games. She’s got two power-play goals and one game-winner, with just a few games left before the Isobel Cup Playoffs begin in March.

She pointed out her work ethic and speed as some of her best qualities on the ice -- two factors that have certainly shown themselves this season with the Buffalo Beauts.

Skeats attended the Beauts’ training camp back in June but was forced to miss the beginning of the season, along with several of her Canadian teammates, due to the aforementioned visa issues.

Prior to joining the NWHL in its inaugural season, Skeats played for Wilfrid Laurier University and then spent a season playing overseas in Austria with the Neuberg Highlanders (EWHL).

She averaged more than a point per game in her time overseas before returning to North America and signing on with the Buffalo Beauts.

Though Skeats said she loved Austria, and noted that many good hockey players hail from there (including New York Riveters forward Janine Weber), she found it “incomparable to North America, in all aspects.”

After returning to North America and signing on with Buffalo, it seems as though she’s certainly found her niche as a power forward, playing a hard, aggressive game while also managing to help out significantly on the scoreboard.

Oh, and if she had to pick a goal song for herself? How about “Jumpman” by Drake and Future, a fun, upbeat song that seems to match perfectly with her equally energetic, positive personality?

She’s also found her place off the ice, growing comfortable in her new home.

Skeats, a native of Whitby, Ontario -- roughly a 142-mile drive from downtown Buffalo -- says she’s enjoyed her time spent living in the city so far.

“It’s a quaint little city that doesn’t have an overwhelming effect on a newcomer,” Skeats said of Buffalo.

She also noted that everyone she’s met has been incredibly friendly, which seems to fit in with Buffalo's nickname, "The City of Good Neighbors."

The school is housed in the Holiday Twin Rinks in Cheektowaga, a short drive from the Beauts’ home at HARBORCENTER.

Skeats’ job as an instructor puts her in direct contact with youth hockey players, whom she helps to grow their respective games in various areas.

“I help teach kids skills on synthetic ice and help with their shot on a Rapid-shot machine,” Skeats said. “I also help kids develop a stronger and more efficient stride on a skating treadmill.”

Skeats has also been involved in the community off the ice, alongside her teammates. The Beauts have worked with the American Red Cross to kick off blood drive campaigns, joined schoolkids for a holiday party, and donated stuffed animals to a local charity, among other charitable and community efforts.

“To be able to help and inspired others is something that I will forever cherish,” Skeats said, adding that she considers herself ‘blessed’ to be able to play professional hockey.

“Having the opportunity of being a role model is probably the most important title I’ll ever have.”

She played highly competitive soccer until the age of 18, and played both and outdoor lacrosse. Skeats also played basketball and was on her high school track team.

She also plays a lot of golf, but doesn’t participate in it competitively.

On top of all that, Skeats got into hockey, as she was partly motivated by her older brother’s playing of the game. That, she said, combined with her mom’s love of the game, motivated her to strap on the skates herself.

Skeats said that if the opportunity for the NWHL hadn’t come up, she’d still be trying to play hockey in Canada while building on her future career of hopefully becoming a Toronto police officer.

For now, she’ll look to continue finding success with the Buffalo Beauts as they finish up the regular season and held into the playoffs and then, potentially, the Isobel Cup Finals -- all the while acknowledging that there’s room for improvement.

“I’d like to have more control with my speed,” Skeats said. “I also want to expand my hockey smarts and work on smoother stickhandling."

The Beauts play next at home on Sunday, February 21 against the New York Riveters.