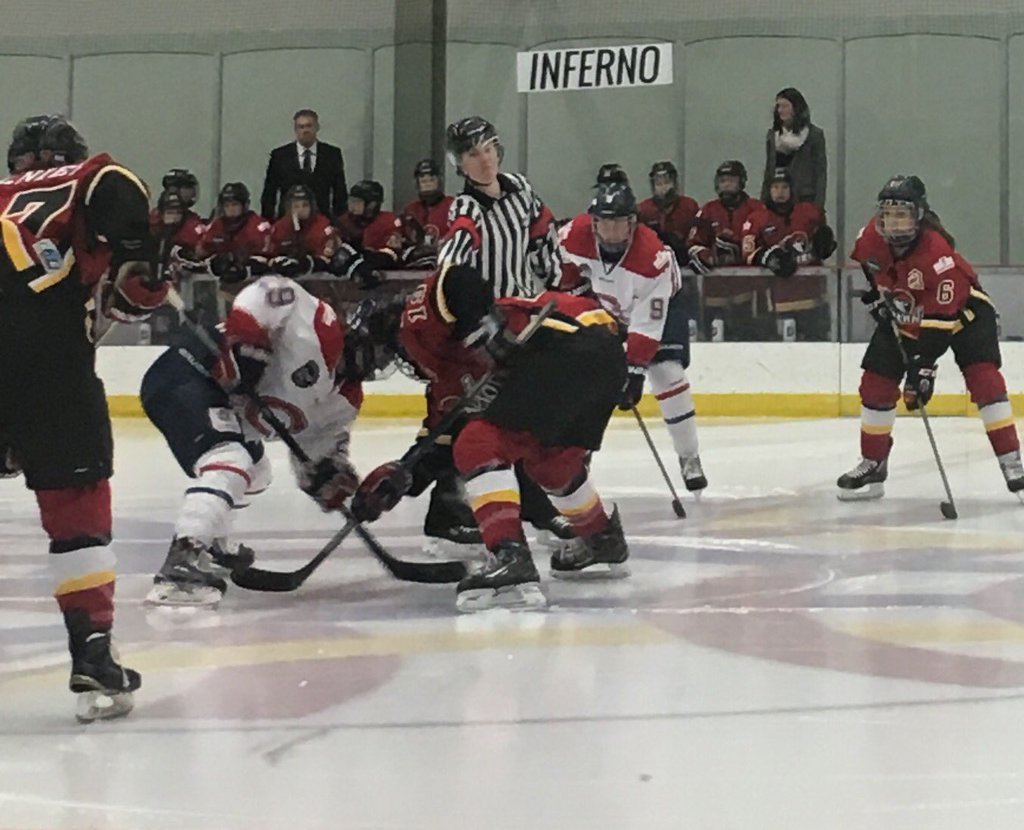 Les Canadiennes clinched the top spot in the CWHL, so the matchups for the semifinals have been set. Toronto will face Les Canadiennes, while Brampton and Calgary will also play.

There's just one weekend left in the regular season, and it will determine whether the Inferno or the Thunder earn the second seed and home ice advantage in the semifinals. Right now Calgary has the second spot, but the Inferno are just one point ahead of Brampton -- and the two teams are set to face off next week.

Rebecca Vint scored twice in the opening period, but Toronto's Alyssa Baldin cut it to 2-1 as the second period started. Laura Fortino scored late in the frame to bring Brampton's lead to 3-1.

"[We] still have to work on our D zone," Brampton head coach Tyler Fines said. "We can’t be giving up chances and we got to stay out of the penalty box. We took way too many penalties.”

But Toronto climbed back thanks to two goals from Kori Cheverie in the third, including the game-tying goal with fewer than two minutes left.

“I think on Sunday we had a good start," Toronto coach Sommer West said. "I think after Brampton got up a few goals, we showed some character and hopefully proved to ourselves that we can play with other teams. You just [have] to work hard and go to the net hard and put pucks away when they’re there.”

"It was a good series against Toronto and we look forward to playing them again, whether it’s this year or next year," Fines said.

Erica Howe started the game for Brampton as Liz Knox sat out because of her injury. Howe finished with 38 saves, while Christina Kessler stopped 33 for Toronto.

“I think goaltending looked good," Fines said. "We controlled the play in the offensive zone for most of the game and we just played them really hard.”

Calgary won Saturday, bolstered by the return of Rebecca Johnston. Les Canadiennes responded with the victory on Sunday.

On Saturday, Johnston made her presence known pretty quickly as she scored twice late in the first period. Noemie Marin responded with a goal for Les Canadiennes in the second, but Jill Saulnier made it 3-1 for Calgary. Brianne Jenner scored 18 seconds into the third to put the game away for the Inferno, who won 4-2.

Charline Labonte made 27 saves for Les Canadiennes, while Delayne Brian stopped 21 for Calgary.

But the Inferno weren't done yet. They eventually scored with 5:38 left in the third, thanks to Brianne Jenner. Calgary tried to find the equalizer but couldn't, giving Les Canadiennes the win and first place in the CWHL.

↑ Charline Labonte: Labonte was instrumental in Les Canadiennes' win on Sunday. She played well, despite a lot of pressure from Calgary, and made a total of 38 saves.

↑ Rebecca Johnston: Johnston made her debut to Calgary's lineup, playing in her first game of the season on Saturday. She factored in three Calgary goals, scoring twice and adding an assist.

↑ Les Canadiennes: The loss to Calgary snapped an 11-game winning streak, the longest in the CWHL. But Les Canadiennes rebounded with a big win, clinching first in the league.

↓ Brampton defense: The Thunder may have won, but they gave up three goals.

"[We] still have to work on our D zone," Fines said. "We can’t be giving up chances and we [have] to stay out of the penalty box. We took way too many penalties.”

↓ Les Canadiennes defense: Labonte played very well, but Calgary had a lot of chances to tie the game on Sunday.

↓ Brampton's goaltending: Well, not its goaltending entirely, because both Liz Knox and Erica Howe are good netminders. But Knox is currently hurt. While Fines said she'll probably be back by the playoffs, if she isn't 100 percent healthy, the Thunder might have a problem. And Howe could end up starting three games in three days.