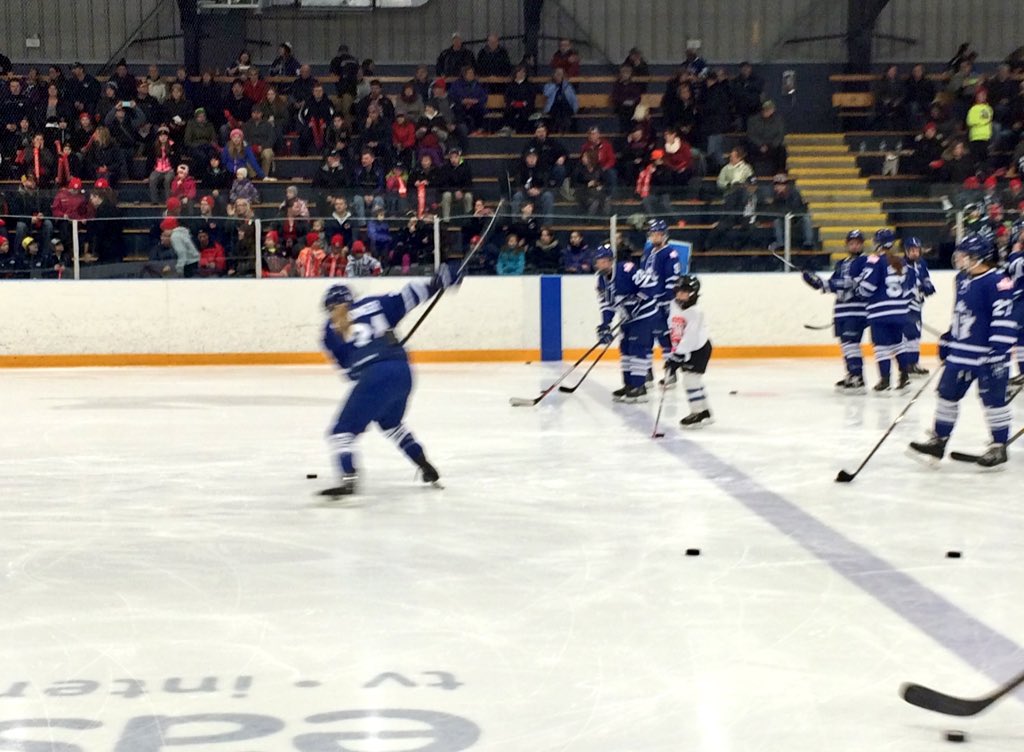 This weekend featured a big test for both Brampton and Les Canadiennes, who faced off for the first time since December, and ended in a series split. The Furies and Blades met as well, and a Toronto sweep clinched a Furies spot in the playoffs.

Les Canadiennes now have a six-point lead over the Inferno, who were idle this weekend. Calgary is just one point ahead of Brampton.

The Furies swept the Blades by a combined score of 10-2.

"I think our goals actually were good goals this weekend, and goals that would work against any goaltender in the league -- and any team for that matter," Toronto coach Sommer West said.

"We were going to the net, we were shooting the puck more, and the shots we were taking are good percentage shots, but we also had the commitment to go to the net and play hard."

Toronto scored three goals in the first period of Saturday's game thanks to Kori Cheverie, Carolyne Prevost, and Alyssa Baldin. Prevost added a goal in the second, and Vella scored the last in the third for a 5-0 win. Christina Kessler made 17 saves in the shutout, while Genevieve Lacasse stopped 24.

"We played a lot of good hockey...I thought we played strong two-way hockey after we got that first period out of the way," Blades head coach Brian McCloskey said.

Sunday's game opened on a Kristy Zamora goal that gave Toronto a 1-0 lead. Kelly Terry scored in the opening 1:45 of the second to boost the lead to 2-0. Boston and Toronto then exchanged goals, but the Furies entered the third with a 3-2 lead. Emily Fulton increased it to 4-2 before Natalie Spooner's empty-net tally made it 5-2.

"[We're finally] getting a few bounces that went our way," McCloskey said. "I mean, we’ve been generating chances in a lot of the games lately -- just not having something to show for it."

Sonja van der Bliek started for Toronto and made 21 saves. Amanda Cariddi subbed for an injured Lacasse, finishing with 49.

"What we really need to bear down on is our defensive zone," West said. "We sometimes get puck watching and other teams, their defense, they’re slotting in and out all the time and our forwards are getting lost in soft areas and we’re not picking up on that. Between that and noticing our odd-man numbers when the teams are attacking us, if they have a 1-on-4 we have to do a better job of isolating that player to create turnovers."

Les Canadiennes won both games the weekend, but won Saturday's game in a shootout over the Thunder.

“I think we had a gameplan and we stuck to it," Brampton coach Tyler Fines said. "We had some adjustments that helped us in the first game. The second game they had two takeaways from our back end, we turned the puck over at our blue line twice. That ended up costing us the game and you can’t do that.

Brampton's Erica Howe made 30 saves, while Charline Labonte made 17 saves in the 5-4 Les Canadiennes win.

Sunday's game was characterized by a lot of back-and-forth scoring, until Les Canadiennes took control in the third. Poulin opened the scoring, while Vint responded to her goal 16 seconds later.

Lauriane Rougeau was the only player to score in the second, and Caroline Oullette gave Les Canadiennes a 3-1 lead 3:14 into the third. But Vint responded with a shorthanded tally less than two minutes later to bring Brampton within a goal. Poulin and Bettez both added goals late to seal the 5-2 win.

Knox started the game for Brampton, but left with an injury in the first period. In relief, Erica Howe made 30 saves. Labonte stopped 17 for Les Canadiennes.

↑ Erica Howe: Howe came in for Brampton in relief on Sunday after Knox left the first period with an injury. Howe played very well and stopped 30 shots.

"She was thrown into a tough spot," Fines said. "The second game’s always toughest, because on the road you’re tired, it’s a quick turnaround for two games. She weathered the storm for us, she did very well. we just didn’t get a flow of motion, we took some undisciplined penalties that ended up costing us and if you do that against Montreal, they got the best player in the world on the other side; she’ll kill you."

↑ Toronto's offense: The Furies scored five goals for the first time since December 6, when they defeated Calgary.

"They always say play hard till the whistle and I think we did a good job with that this weekend. And our [players are] just taking great shots, like three’s some really nice goals this weekend some of those things aren’t taught, they’re something the [players] bring to the team as individual skills. Some of the shots were just really phenomenal shots.”

↑ Liz Knox: There's no timetable for Knox's return, but she deserves a shoutout for making an incredible stop after she got severely hurt in the first.

Here's where Knox got hurt:

And here's the save she made afterward:

↓ Les Canadiennes defense: Brampton's a good team, and while the Thunder weren't able to win, they still created some good chances.

↓ Goaltending health: Two of the league's netminders got hurt this weekend -- Boston's Genevieve Lacasse and Brampton's Liz Knox. Both have been instrumental for their teams, and Lacasse is one of the best goaltenders in the league. While Lacasse has far and away the most saves in the league, Knox has a CWHL-best .924 save percentage.

↓ Boston's power play: The Blades have struggled to score all season and have a league-last power play of 9.86 percent.

"The other teams, some of their most offensively dangerous players tend to kill penalties as well and we just continue to give up scoring opportunities when we’re in [power play] situations," McCloskey said. "It takes us out of our flow...We can’t afford to be giving up crazy opportunities to the other team when we’re [on the power play]."