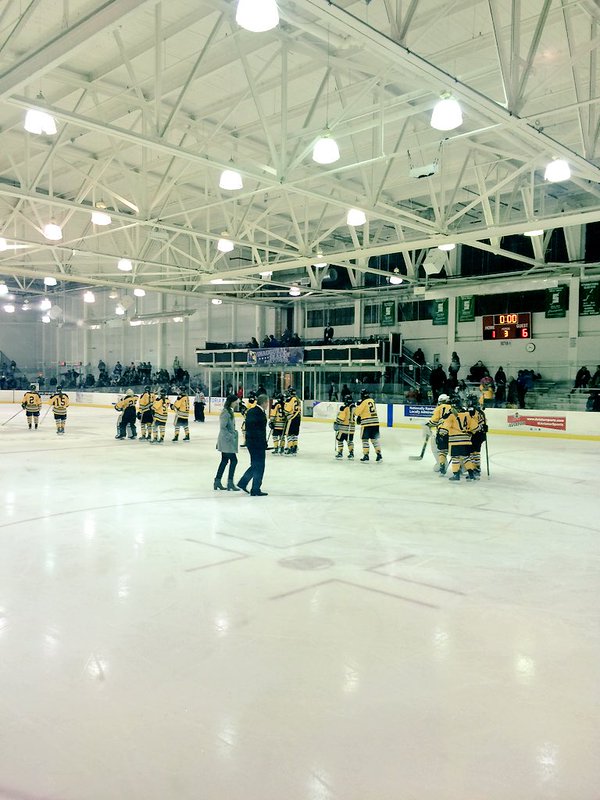 The Boston Pride plowed over the New York Riveters by a score of 6-1 on Saturday night in New York's penultimate home game of the season.

Chelsea Laden, who was recently acquired in a goalie-for-goalie swap with the Connecticut Whale, got the start in net for the Rivs, and was tested throughout the first period as the Boston Pride made 15 shots on goal. One of them (a rebound chance by Kelly Cooke) was the first to go in, after Laden stopped a shot from the point by Alyssa Gagliardi. The Riveters got that one right back, however, after Lyudmila Belyakova buried a tough angle shot past Brittany Ott. But Belyakova's brilliant goal would be the last display of offense on the scoresheet for New York.

The Pride jumped out to a 3-1 lead before the end of the first, on a power play tally by Jillian Dempsey scored from right inside the blue paint, and a slapper from up high by Gigi Marvin.

The second period was played more evenly, with more back and forth going in the Riveters' favor, but Boston still managed to pad their lead early in the frame. An outstanding individual effort goal by Zoe Hickel brought the score to 4-1; she outskated both Amber Moore and Elena Orlando and cut in front of the net, and managed to get off a forehand shot at close range that went behind Laden.

The third period was bookended by insurance goals from Boston's co-captains. First, Brianna Decker took a nifty pass from Hilary Knight and unleashed a snipejob from the bottom of the right circle that eluded Laden. Knight also scored easily on a feed from Decker on a 2-on-1, which brought the final score to 6-1 with under two minutes to play.

The Pride more than doubled the Riveters' shot total through two periods (36-17) and got some solid goaltending from Brittany Ott as usual. Without a near-perfect performance in goal, the Riveters were unable to mount much of a challenge to the Pride's rolling offense, though they did get strong performances from Morgan Fritz-Ward and from their lone goal-scorer Belyakova.

The Riveters also showed some glaring issues with their special teams. The Pride took seemingly unlimited penalties in the second period, and New York was unable to convert on any of their power play chances. Boston's penalty kill was aggressive and they dominated puck possession; meanwhile, New York struggled to get shots through to Ott, despite their player-advantage, and repeatedly found themselves unable to retrieve pucks along the boards and maintain possession.

With the win, the Pride remain in second place in the NWHL, just one point behind the Connecticut Whale. Both the 1-2 and 3-4 spots will be in contention heading into the final games of the regular season, so while everybody will make the playoffs, the final seeding is still a mystery. However, Boston's offense is heating up at the right time, and seem to be heavy favorites, regardless of their final standing.