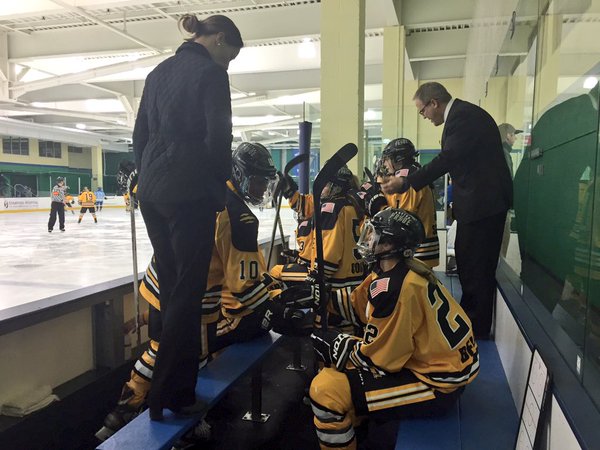 It's not exactly a brave new world for the Connecticut Whale, who have become the most controversial team in the NWHL this year.

They won their first 10 games of the season, despite some close calls; it turns out that having Kelli Stack in your back pocket scoring at a pace of 1.23 points per game will help you out a lot in close matchups. Kelly Babstock, who graduated Quinnipiac in 2014 as the program's all-time leading scorer, has also been a surprise, nearly matching Stack's offensive output. With Connecticut's tough blueline, led by expert playmaker and power play quarterback Kaleigh Fratkin, and nearly flawless goaltending from Jaimie Leonoff, Connecticut has often seemed like the best team in the league.

When Connecticut's GM resigned, there weren't any real alarm bells going off. Sometimes people have to step aside from jobs because of other obligations or conflicts. However, since then, the Whale's head coach Jake Mastel has also submitted his resignation. Kate Cimini of Today's Slapshot published a bombshell report that NWHL Commissioner and NY Riveters GM Dani Rylan had held a secret meeting with players without the team's GM to discuss the future of the team. Specifically cited: concerns reportedly from players about being dissatisfied at the way Mastel ran practices.

The Whale have bookended the NWHL All-Star Game with two losses to the Boston Pride, with scores of 4-1 and 5-2. Their once lethal and unpredictable offense is flagging a bit towards the end of the season, though it's impossible to say whether the personnel upheaval has much to do with it.

In addition, the Whale have hired Heather Linstad as their new head coach, a former University of Connecticut coach who parted ways with the college after allegedly dismissing a player from her team after the player reported that she had been raped. The player sued UConn for Title IX violations and received a large settlement. Linstad's return to coaching caused serious disquiet among women's hockey fans online, including many Whale supporters who have memories of the issues at UConn surrounding Linstad's resignation.

Linstad's first game behind the bench was that 5-2 loss on Sunday, January 31st. After a scoreless first period, the Pride jumped out to a 3-0 lead on goals by Gigi Marvin, Jordan Smelker, and Hilary Knight. Marvin's goal was a backhand flip from the slot after defensive coverage broke down for the Whale in their own zone, which was also a theme on the tallies by Smelker and Knight. The Whale looked lost on all of those goals; and while some magic off of a rush by Kelli Stack got them on the board, it wasn't long before Brianna Decker struck to bring the lead to 4-1 on a shorthanded goal. Decker picked up a rebound from a shot by Knight that eluded Leonoff and her defense.

In the third period, Knight was able to get her second of the game by charging unchallenged into Leonoff's crease and tapped home a rebound next to the post. The Whale got a second goal off of a great effort from Jessica Koizumi and Kelly Babstock, but the 5-2 score would hold. It was perhaps the least organized that the Whale have looked all season, and Leonoff was not making as many game-changing saves as she had earlier in the season.

In addition, Connecticut goaltender Chelsea Laden apparently requested a trade from the team, and was swapped for the Riveters' Shenae Lundberg, who had been the "third goalie" by default due to an extended absence with an ankle injury. The swapping of third string goalies seems an unusual trade; even in the NHL, where trades are commonplace, it might seem like a request made for personal reasons rather than roster concerns. However, the reasons for the trade are not publicly known, and it may be unrelated to the other personnel changes for the Whale.

With this loss, the Whale are close to losing their top ranking in the NWHL standings to the Pride. Meanwhile, the Buffalo Beauts have pulled into third place, with their victory over the New York Riveters at home on Sunday. (See Melissa Kania's Disney-laden recap for more.)

Things are turning around in the NWHL, but for the Whale and for the optics of the league's governance, they aren't necessarily changing for the better.