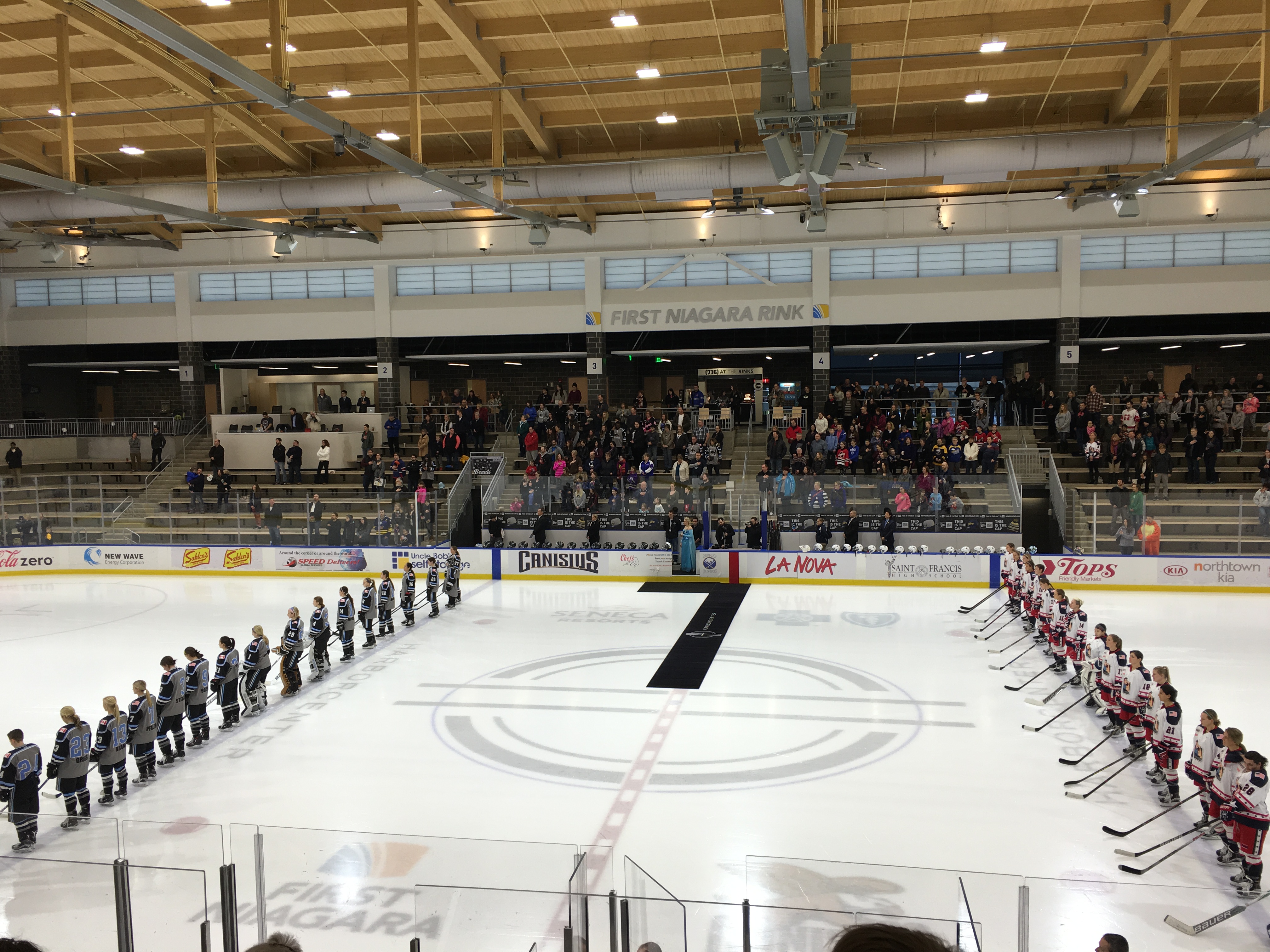 It was a supercalifragilisticexpialidocious win for the Buffalo Beauts as they captured their first home victory of the season on Sunday.

The Buffalo Beauts found themselves in a whole new world Sunday afternoon as they pulled off a 4-2 win over the New York Riveters in their first week back from the NWHL All-Star Break.

Sunday's game featured a Disney theme, to go with the Disney On Ice show that had been playing in Buffalo for the last few days. "Elsa" from Frozen, also known as Beauts forward Tatiana Rafter, dropped the puck in a ceremonial face-off. (And anyone who reads this recap closely enough may pick up on several Disney references!)

The Beauts came out with a strong effort in the first period, taking advantage of two power play opportunities to take a 2-0 lead.

Celeste Brown found herself in the penalty box for a tripping call with just about four minutes to play in the first; Gabie Figueroa joined her a short time later, giving Buffalo a lengthy 5-on-3 chance.

Who else but Kelley Steadman to take advantage of the power-play, putting the Beauts up 1-0? The goal marked Steadman's 10th of the season; assists went to Meghan Duggan and Emily Pfalzer.

Just a few short minutes later, the Riveters found themselves back on the penalty kill, with Amber Moore in the sin bin.

And once again, it was Steadman powering up to make it a two-goal lead with her 11th of the season. Shelby Bram and Meghan Duggan were credited assists on the goal, which came with just three seconds left in the first.

Things fell apart a bit in the second for the Beauts, with the Riveters throwing the body around and putting one on the board (from Beth Hanrahan) to make it a one-goal game.

Despite that, Buffalo still had a strong effort and was outshooting the Riveters 31-17 at the end of the second period.

The Riveters weren't ready to let it go, however, and came out to tie things up in the third on a goal by Bray Ketchum, and just like that, the Beauts would have to dig a little deeper to come out on top.

Shelby Bram, however, knew how she wanted this story to end: with a Beauts win -- and when you wish upon a star, anything can happen.

And that's exactly what she helped to make happen, putting Buffalo up 3-2 with under eight to play in regulation.

Erin Zach added an empty-netter for her first career NWHL goal to give the Beauts the 4-2 victory on what was certainly a Bella Notte for all the Buffalo fans in attendance.

In the end, the Beauts outshot the Riveters 45-22. Brianne McLaughlin made 20 saves; the Riveters' Nana Fujimoto made 42.

For a while there, it seemed like the Beauts were never going to capture a win on home ice. Now? It's Hakuna Matata for Buffalo, who faces a pair of games on the road before returning home on February 21.