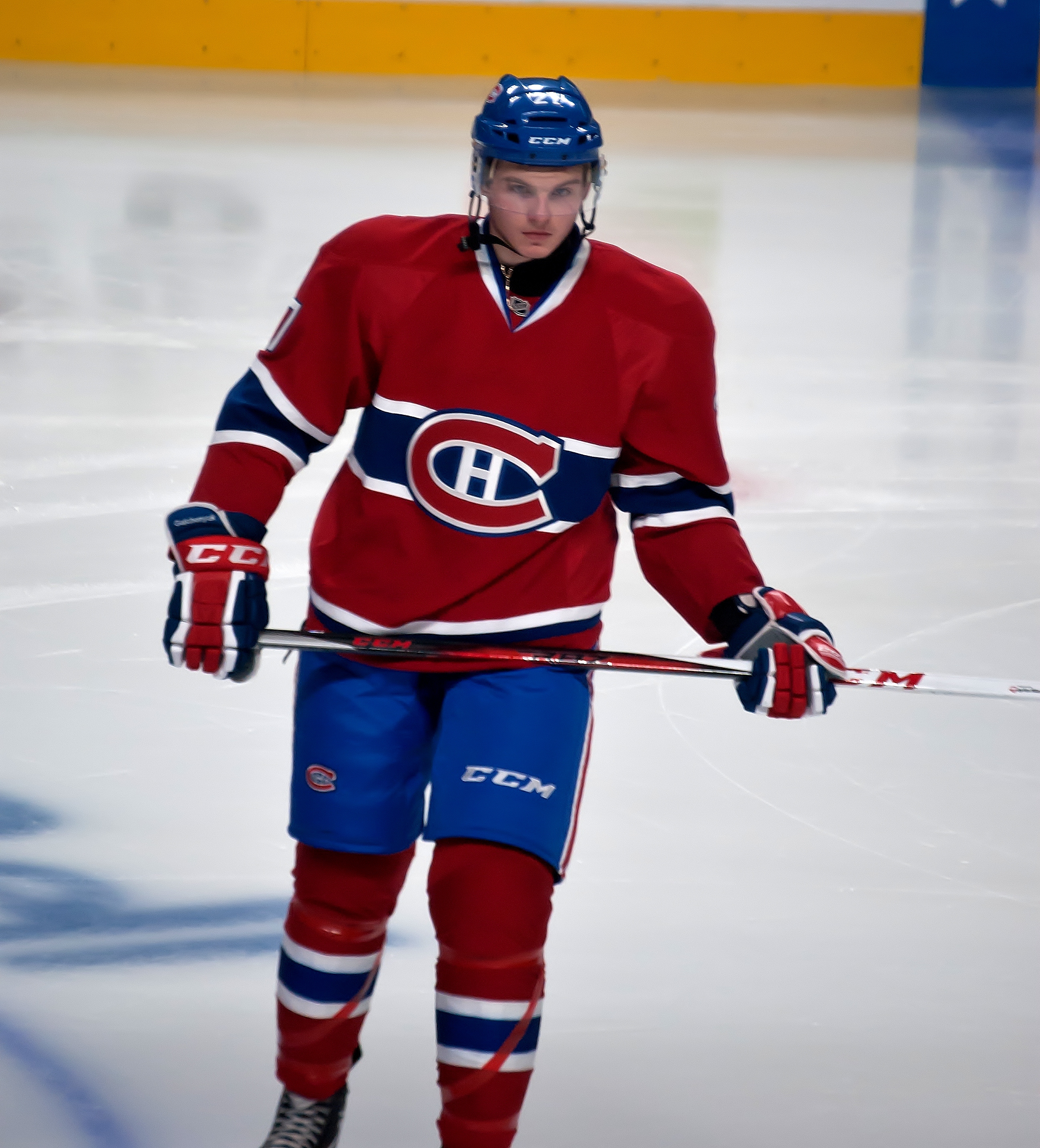 On the morning of January 12, Montreal paper La Presse published a report regarding an incident involving Montreal Canadiens forward Alex Galchenyuk and the arrest of his girlfriend, Chanel Leszczynski, for instigating a physical domestic dispute.

Montreal police reported that a 911 call was placed by guests of Galchenyuk’s and, shortly after arriving on the scene, officers questioned everyone in attendance, including Galchenyuk’s teammate Devante Smith-Pelly. The short investigation resulted in Leszczynski’s arrest. Galchenyuk has since refused to issue a charge of domestic violence against Lesczyznski, but police protocol mandates the case to be presented to prosecutors for review. Galchenyuk and Smith-Pelly reported to the Canadiens scheduled practice that day and met with general manager Marc Bergevin, but were not allowed to speak with the media.

While information has been slow to surface on this incident, all sources indicate that Alex Galchenyuk was assaulted by his girlfriend. That makes him a victim of domestic violence.

So why, in response to this incident, has the blame been placed on Galchenyuk by various media outlets, including (most surprisingly) in articles on websites that are specifically dedicated to coverage of the Canadiens?

Coverage of this specific incident explicitly focuses on the suspicion that Galchenyuk and Smith-Pelly were hosting a raucous all-nighter gone wrong following the Canadiens’ loss to the Pittsburgh Penguins last week, many plastered unnecessarily with sultry Instagram selfies of Leszczynski. While it is very possible that the two young forwards were letting off steam like many young people do -- by drinking and hanging out with friends -- it is important to note that in many of these articles, this speculation functions as a way of blaming Galchenyuk for the downfalls of his team and the actions of his girlfriend.

Does this sound familiar?

Maybe if it's placed under a different context: a woman spends a night with her friend in a Buffalo bar. A rich, well-known athlete invites her to a house party. She had the nerve to say yes to the party, but no to the sex. She had to have known what kind of message she was sending, right?

This is the story of a young woman who was allegedly assaulted by Patrick Kane this summer, leading up to the beginning of this season. The main difference? Both the Chicago media and Blackhawks fansites dedicated articles to defending the Stanley Cup winner, insisting that what happened was a misunderstanding or a ploy for money by the accuser. There were no trade suspicions, no cries for reform in the system, and certainly no desire for punishment.

Their star player -- who has a longer, more extensive history of drunken debauchery than Galchenyuk -- would not be let down by his team or his fans. Despite Kane's documented history of drunken violence resulting in assaults against a cab driver and a college student, the press did not blame him for what transpired over the summer.

Yet a 21-year-old young man who may have held a party and was victimized by a woman is instantly flagged as a danger, an embarrassment, a liability to his team.

Understandably, it's not ideal for professional athletes to participate in excessive partying. It's unprofessional at best and dangerous at worst. In 2009, the Canadiens dealt with harmless but embarrassing partying behavior from superstar goalie Carey Price and other players. For an organization so rooted in the appearance of class and professionalism, it’s no surprise that the first instinct in the Montreal media is to speculate that if Galchenyuk actually was partying, he would face some sort of punishment from management.

But these are only speculations. Management styles between the Blackhawks and Canadiens aside, the dismissal of the seriousness of Leszczynski’s attack on Galchenyuk reflects a deeper issue within hockey and sports culture.

The hyper-masculine attitude that has so powerfully shaped sports and sports culture -- the same one that dictates that athletes who are talented are excused from any crime they commit -- does not like to mention domestic violence against men. And when it does, the victims are chastised. He's weak. He should have known she was crazy. He's strong; he could have stopped her.

Domestic violence carries a heavy, heavy stigma against its victims, male or female, and domestic violence against men is not taken seriously, especially within such a highly masculinized sphere. We are taught that men are strong and powerful, particularly athletic men, and this erases the very real possibility of violence being committed against them.

This same mindset makes it incredibly difficult for male victims to feel safe about disclosing their abuse: they are ashamed that they weren't able to stop the behavior themselves, and every message given to them says that they aren't true men if they are being abused. (Check out this link for more information about domestic violence against men.)

We most likely never will know -- but that doesn’t matter. What matters is that Galchenyuk, like any other person who has been affected by intimate partner violence, deserves support and not judgment.

In light of the NHL's recent efforts to raise player awareness about domestic violence and sexual assault, I question whether or not they were prepared to start the dialogue on what to do when a teammate becomes a victim. How will they handle the issue of victim blaming that is so pervasive in hockey culture?

Historically, when a complaint is issued against a player for committing sexual assault, domestic violence, or similar crimes, the case does not continue far beyond a civil suit and rarely results in a criminal charge against the player. A spreadsheet detailing various incidents of domestic violence, rape, and harassment in various hockey leagues, committed by players, coaches, and ambassadors has been compiled by @NearidLeLark on Twitter. This list does not include Patrick Kane’s sexual assault accusation from this past summer, or accounts of players who have been victims of domestic abuse, sexual assault, or rape. In the latter case, this is largely because we don't have many reports of such incidents in the media at all.

Out of 15 players, coaches, and ambassadors accused of domestic violence from 1993 to today:

Out of 65 players and GMs accused of sexual assault and rape from 1989 to today:

These details include quotes from various members of the hockey community that reflect the pervasive and harmful culture of victim-blaming, misogyny, and rape culture deeply embedded into the cultural DNA of athleticism. With this body of history laid out, it's easy to see how a fair perception of Galchenyuk, or any other male victim, never stood a chance.

Following Colorado Avalanche goaltender Semyon Varlamov’s 2013 domestic violence case, in which he played the night after being released from jail, Fedor Tyutin of the Columbus Blue Jackets said that women in America “can go to the police for any little thing, complain and bring a lot of problems to men. That’s why the only mistake of Semyon is that he got together with this girl.”

In Montreal, victim-blaming comments from coach Michel Therrien have surfaced during press conferences after the domestic violence accusations were made public, deeming his assault as something to “learn from” for Galchenyuk. Therrien cites the incident as a “mistake.”

Most of the Canadiens players are reluctant to comment much on the issue at hand, citing it as an off-ice or a personal issue. Meanwhile, Galchenyuk has been reporting to team practices and games since Tuesday morning and has, quite unnecessarily, apologized for being a “distraction” to his team. Unlike many of the women who have been victims of domestic violence and sexual assault in hockey, Galchenyuk is already in the spotlight and is expected to be able to explain himself.

One player in particular, however, made an especially supportive comment -- a player who most likely knows of the situation at hand better than anyone else in the locker room.

“All things aside, it’s a pretty serious incident,” Devante Smith-Pelly said. “So, you know, we all want to be there for Chucky, and, you know, if he needs anything, all the guys are there for him.”

Despite his apology, Galchenyuk (thankfully) believes that he did nothing wrong. That’s an important first step for anyone who has been victimized.

If you or someone you know is in an abusive relationship, please contact the National Domestic Violence Hotline at 1-800-799-SAFE (7233) or visit www.thehotline.org for resources.

If you or someone you know has been the victim of sexual assault, please contact the Rape, Abuse, and Incest National Network (RAINN) at 1-800-656-HOPE (4673) or visit www.rainn.org for resources.