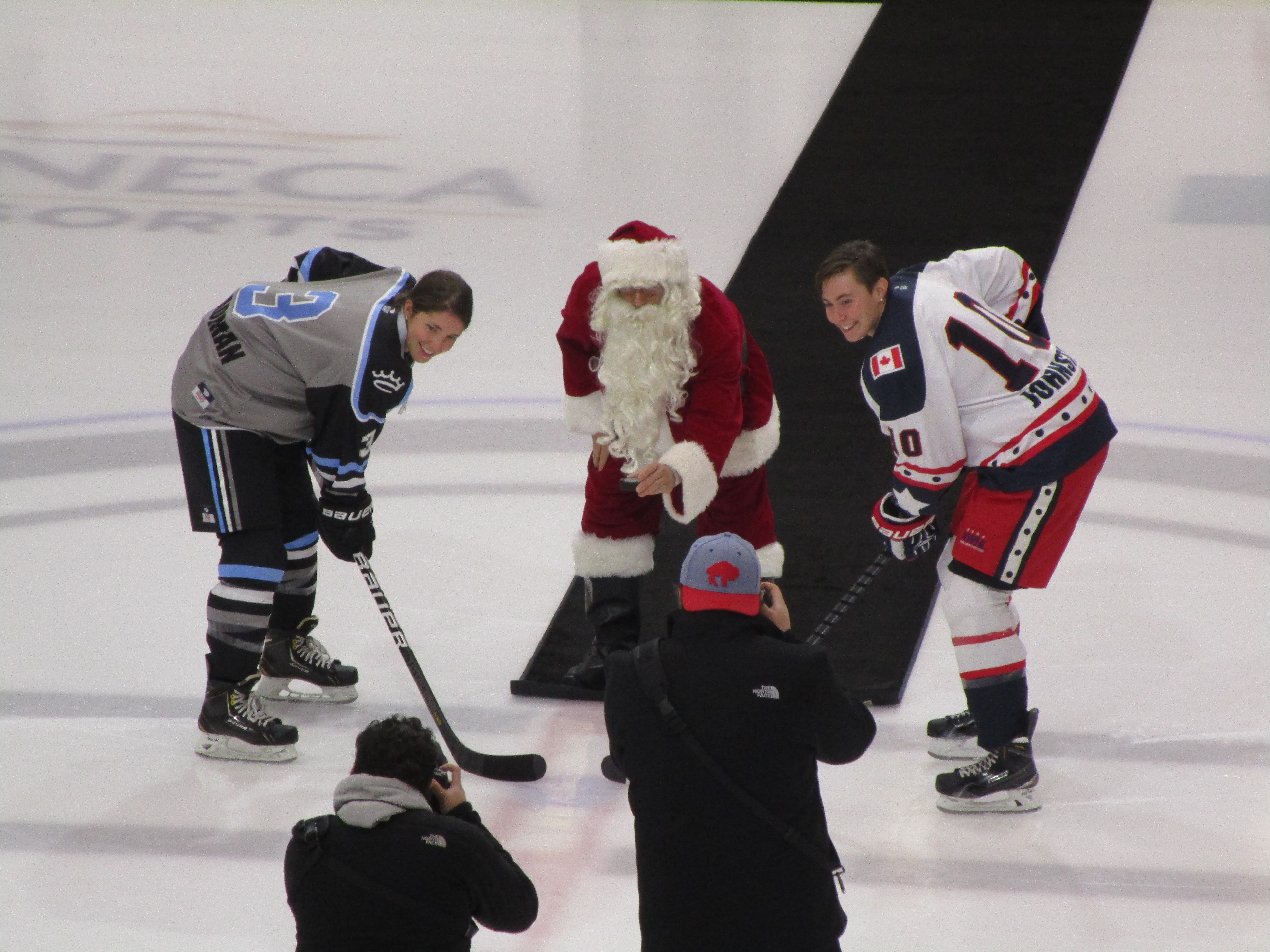 Between Santa Claus dropping the puck in a ceremonial pre-game face-off and hundreds of stuffed animals raining down on the ice, Sunday's Buffalo Beauts vs. New York Riveters game was an interesting one.

That's not even mentioning the fact that it was the Riveters' first-ever trip to Buffalo -- a trip they'll make twice more this season -- and that both teams were missing several players, including some key ones.

In the end, the Riveters outplayed the Beauts and pulled off a 7-3 victory in front of a great crowd at HARBORCENTER in downtown Buffalo.

Janine Weber opened the scoring just 1:12 in to give the Riveters an early lead, but the Beauts came right back with a power-play tally by -- who else -- Kelley Steadman.

With that goal, fans got to enjoy Teddy Bear Toss day, as hundreds of stuffed animals -- some teddy bears, some not; some MASSIVE, some tiny -- rained down on the ice.

The Riveters came on hard in the first period, adding a late goal by Meghan Fardelmann with under three minutes to go to carry a 2-1 lead into the intermission.

That's where things started to fall apart for the Beauts.

They were unable to take advantage of an early power play, then got called for a hooking penalty to negate it altogether. Lyudmila Belyakova then notched her first NWHL goal to make it 3-1.

She'd add her second just a short time later before Fardelmann tallied her second of the afternoon -- and just like that, the Riveters held a 5-1 lead over the Beauts.

To help calm things down, the Beauts pulled McLaughlin, sending Amanda Makela in goal. McLaughlin allowed five goals on 22 shots faced, and overall, the Beauts seemed to lose their jump and let the Riveters walk right in.

Kourtney Kunichika potted her sixth of the season to get the Beauts back into it, with Devon Skeats adding her seventh of the season early in the third to make it a 5-3 game.

Moments later, Weber scored her second of the game to regain the three-goal lead for the Riveters.

With three players on hat trick watch, you had to expect that at least one of them was going to make it -- and sure enough, Fardelmann notched her third of the night in the third period to register the first-ever hat trick in Riveters franchise history.

The Riveters pulled off a 7-3 win, as Fujimoto registered 32 saves. McLaughlin, once again, had 17 saves on 22 shots, while Makela came in and stopped 11 of 13.

"We didn't show up; they did. We've got to learn from this and be ready to play all the time." - McLaughlin

The Beauts were without the services of Meghan Duggan, captain Emily Pfalzer, and Megan Bozek, all three of whom are at Team USA camp. Shelby Bram was also absent, as she's in Europe preparing to represent Team Canada at the Nations Cup next month. Kelly McDonald was also out.

All of those absences meant that the Beauts had to get a little creative with their lineup for Sunday's game.

Practice players Kelley Steadman, Courtney Carnes and Annemarie Cellino all came into action, with Cellino (normally a forward) playing defense. Forwards Tatiana Rafter and Jessica Fickel also suited up on the blueline to fill in.

The Beauts have been lacking consistency in their roster this season, with players missing at the start of the season due to visa issues, then injuries here and there, and now the Team USA camp and more.

"Every game we play is a different roster for us," McLaughlin said. "We're getting used to that; we all just have to go out there and do our jobs."

The Riveters were without Shenae Lundberg, going with the goaltending tandem of Nana Fujimoto and Jenny Scrivens. Leading scorer Brooke Ammerman was also out, as were Cherie Stewart, Taylor Holze, Margot Scharfe, and Erin Barley-Maloney.

"We were definitely missing those players," Mclaughlin said. "It makes a big difference, but at the same time, we've got to step up and be there, be ready to play, and we just weren't."

Steadman noted that she thought the players -- Fickel, Cellino, and Rafter -- did well stepping in on D, a position that they may not have ever played in before, or hadn't played in for quite a long time.

Buffalo will return to action January 3 when they visit the Boston Pride.

The Beauts don't return home until January 31, when they'll host the Riveters once again. The next NWHL action at HARBORCENTER will be the first-ever All-Star Weekend, January 23-24.