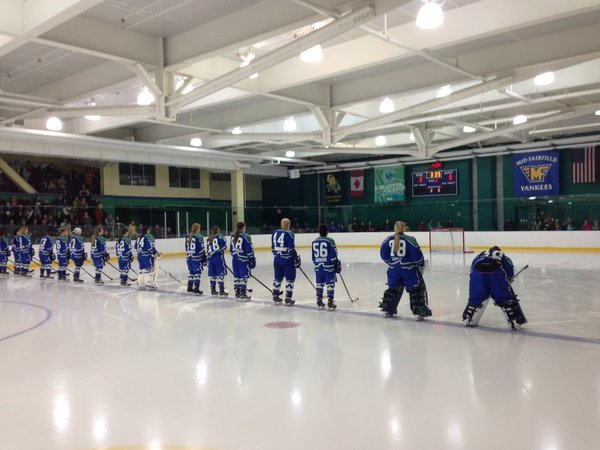 The Connecticut Whale came to their home rink with a perfect record, and the Pride came to Stamford with just 11 healthy skaters.

The Whale experienced a bit of a shake-up prior to Sunday's game with the resignation of their general manager, Harry Rosenholtz. On the other hand, the Boston Pride were able to bring their number of skaters up to 12, as general manager Hayley Moore signed a one-day contract and suited up in Jordan Smelker's jersey to play forward for the day.

The Whale started capable backup Nicole Stock instead of Jaimie Leonoff, and Brittany Ott was in net for Boston. Both goaltenders were sharp early, and both teams played pretty close to the vest, as both had players missing to the Team USA camp that depleted the Pride's roster.

Kelly Cooke broke through at 15:45 of the first for Boston, coming down the right wing and rifling a shot past Stock.

The scoreless second period saw things open up a bit more, and Ott made 17 saves as the Whale tried to tie it up, but no one was able to convert.

The Whale seemed poised to come back when they scored to tie about midway through the third on a net-front scramble. Ott held her post on a try at the side of the net by Sam Faber, but Kate Buesser was waiting at the other side of the net to tap it home.

Emily Field buried the game-winner, though, with just over six minutes to play. A shot from the point by Blake Bolden hit traffic in front, and Stock made the initial save, but the rebound bounced to Emily Field, who got the last stick on it to steer it into the net.

This was a strange game for both teams, as many key players were missing, but it was still an entertaining tilt, and Boston's cautious adjustments to their style payed off. Stock played extremely well in Leonoff's stead. The two teams were evenly matched, but the Pride managed to capitalize on one great snipe by Cooke and got a dirty goal for good measure to seal the win.

The Pride will return to action on New Year's Eve versus the CWHL's Les Canadiennes de Montreal, an event that was just confirmed today by the NWHL via press release. Their marquee players will still be at Team USA camp, but other players from around the NWHL will fill out the roster, as was previously suggested. More on that later, as Victory Press will be on hand to cover the game.