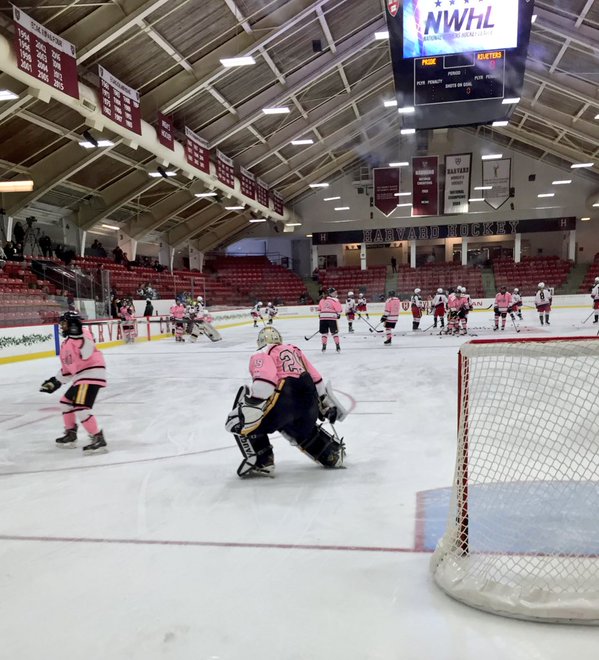 The New York Riveters had gained momentum the last few weeks from netminder Nana Fujimoto's strong performances. With Fujimoto out and Shenae Lundberg also still recovering from an injury, the Riveters turned to Jenny Scrivens in goal to start her first organized game in over six years. Scrivens, then known as Jenny Niesluchowski, had played her last college game with Cornell at the Bright-Landry Hockey Center in February 2009, in a 3-0 loss to the Harvard Crimson where she stopped 31 shots. The Riveters also dressed former BC Eagle Corinne Boyles as an emergency goaltender.

This Sunday, Scrivens was both spectacular and lucky, stopping 32 and looking relatively comfortable against a skilled Boston Pride team with a seasoned and confident Brittany Ott at the other end of the rink.

It was a sloppy start though for both teams. The first period featured multiple neutral zone turnovers and action going both ways, though the Pride easily held the shot advantage. The Riveters' power play was disorganized, to say the least, as they gave up multiple shorthanded chances to the Pride and eventually went 0 for 5 chances on the evening. However, Scrivens was strong and bailed them out at every possible opportunity. The first period shots ended 16-6 in favor of the Pride.

The second period was slower as both teams seemed to fall into a more defensive posture. Still, it did feature a few more strong plays from Scrivens. The Riveters also found themselves with a shortened bench as Taylor Holze fell awkwardly into an open bench door and had to be helped off by staff -- she did not return to the game.

The game finally opened up in the third period on a rebound chance by Jillian Dempsey. Scrivens committed to her left, but with traffic in front, Blake Bolden's shot popped to Dempsey, who tapped home her third of the weekend and third of the season.

With the third period already half gone, it was crunch time for the Riveters, and while they mounted some pressure, the Pride mostly kept them to the outside. When they pulled Scrivens with three minutes left, it could have been over when Hilary Knight hit the empty net from her own blueline to make the score 2-0.

The Riveters didn't quit, though, and were able to get a cycle going in the offensive zone with just over two minutes to play and their goaltender again pulled for an extra attacker. Ashley Johnston, a stalwart on the back end for New York, held the puck at the line and snapped a puck towards Ott that Meghan Fardelmann tipped into the back of the net.

With the following face-off at center ice, Scrivens returned to her crease. Before she could return to the bench, the Pride stormed back into the attacking zone. Amanda Pelkey skillfully held the puck, dodging defenders and whipping a backhander top shelf on Scrivens. With a 3-1 score and just 1:20 on the clock, the Riveters won the next faceoff and eventually got Scrivens to the bench, but Hilary Knight had possession again, and scored another empty net goal for good measure, evading three Riveters on the forecheck and wristing it home.

With five goals scored in the last 10 minutes of the game, it was a wild finish, and probably not the result that either team wanted. The Pride came very close to being wholly frustrated by another hot goalie, but gritty players like Rachel Llanes and Jillian Dempsey had a chance to shine over the weekend. While Saturday's game was a hard-fought win, getting more offense early is probably on their coaches' wish list. That said, they did not have the defensive lapses in this game that put them in a difficult position in previous matches against the Riveters.

As for New York, they did miss Holze after she left the game. While she is not a salary player (meaning she isn't obligated to appear in every game), she has dressed every week for the team and has helped to generate offensive chances on a fairly consistent basis. The Riveters still are not a team that is known for their firepower, but with their defense tightening up and help from their goaltending, they're finding themselves in situations where they have the puck in the offensive zone much more often. However, getting shots to the net and scoring is still an issue. Fardelmann's tip on Johnston's shot was masterful, though, and more goals like that will go a long way for the Riveters.