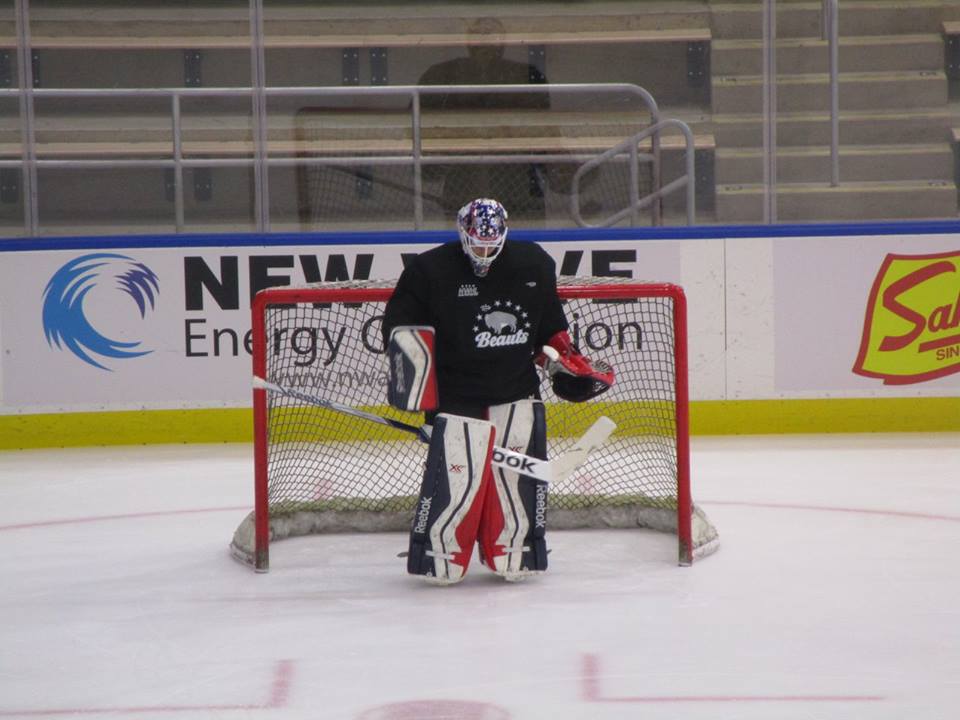 The Buffalo Beauts captured their first franchise victory on Sunday by pulling off a 3-1 win over the New York Riveters in the first-ever meeting between the two teams, and the Beauts’ first-ever road game.

Devon Skeats had a two-goal night, while Hailey Browne added her first of the season to help lead the Beauts to the win.

Buffalo started off the night slowly by failing to take advantage of multiple power-play opportunities, including three in the first period.

The Beauts appeared to have scored early in the second period, but the goal was waved off as Riveters netminder Nana Fujimoto had been knocked into.

Moments later, the momentum of the game switched as the Riveters potted the first of the night. Madison Packer tallied her third of season, assisted by Celeste Brown, at 14:32 of the middle frame.

The Riveters’ lead would last the remainder of the second period and part of the third -- until Skeats tied things up at one with 11:45 left on the clock.

With the game even, it would once again be Skeats who put Buffalo on the board, scoring her third of the season to give the Beauts their first lead of the evening. Kourtney Kunichika registered the lone assist.

Several minutes after the Beauts tied things up, the Riveters pulled a goaltending swap, which allowed Jenny Scrivens to see her first NWHL action. Scrivens is the final goaltender to make her NWHL debut.

With the clock running down, the Riveters would pull Scrivens just a short time into her debut for the extra attacker. Though they put on some good pressure, Brianne McLaughlin stood tall in net for the Beauts, and Hailey Browne eventually landed the empty-netter for her first of the season.

Just like that, the Beauts had their first franchise win, a feat they were visually and audibly thrilled about; you could see Kelley Steadman jumping up and down in the celebration circle around McLaughlin, and hear multiple players’ joyous shouts.

The Beauts were without the services of forward Meghan Duggan in Sunday’s game. Erin Zach, who missed last week’s game with an upper-body injury, returned to the lineup. Duggan’s absence allowed Kelley Steadman to remain in the lineup for today’s game. (ETA: Duggan was coaching for Clarkson and was unable to attend the away game.)

One thing that may prove troublesome for the Riveters moving forward: a possible injury to Nana Fujimoto. Though she played for most of the game, the Riveters eventually pulled her in favor of Scrivens after she’d allowed just two goals. She was seen on the bench being tended to by a team trainer, and was helped off the bench at the end of the game, skating slowly.

Fujimoto has been the Riveters’ top goaltender this season. She’s played 262:08 of the first 300 minutes in the team’s history, with a 2.98 GAA and .919 save percentage. Shenae Lundberg has had just 28:56 of playing time, with Scrivens making her (albeit short) debut this evening.

The Buffalo Beauts continue on their first-ever road stint with a pair of games next weekend. It’ll be a packed couple of days, as they face the Boston Pride on Saturday at 7:30 PM -- one of just two Saturday games on the NWHL’s schedule -- and then visit Connecticut on Sunday at 4:30 PM.

It’ll be the first, and only, back-to-back set for the Beauts, but will provide a nice challenge for them coming off their first win.

The only other Saturday game on the NWHL schedule comes on January 9th, when New York and Connecticut face off.