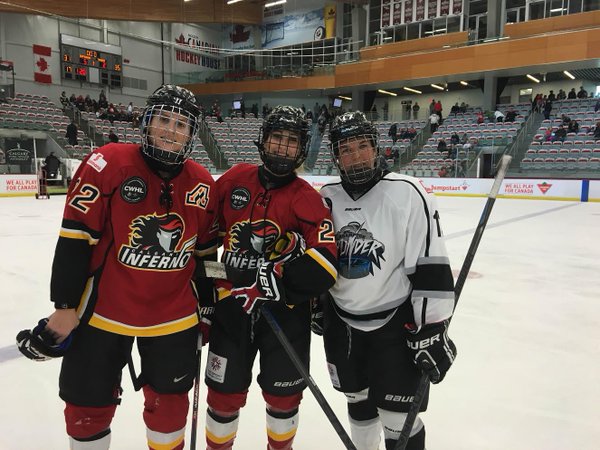 The weekend featured a pair of sweeps, as both Les Canadiennes and Calgary continued earning wins. The Inferno swept Brampton and Les Canadiennes swept the Furies, although some games were closer than the score indicated.

Brampton has quietly been an upstart team in the CWHL this year, but its game against Calgary was their first against the league's best. The Inferno proved again why they're atop the CWHL standings with a 4-3 win on Saturday and a 5-2 win on Friday.

"We competed very well this weekend, we were the first to puck battles [and] wanting to win 50-50 pucks," Calgary coach Scott Reid said. "We were determined to accomplish those two things, and it helped us with our victory.”

Calgary had strong starts in both games. On Friday, the Inferno netted two goals in the first and second periods to take a 4-0 lead on Brampton. But the Thunder responded late in the second and again in the third with three goals of their own.

"Playing with a lead, sometimes you get complacent," Reid said. "We have to do a better job just sealing it instead of allowing teams back in it. In this league, nobody quits. It showed this weekend again that you have to be prepared to play three periods.”

"[We played] very well," Brampton coach Tyler Fines said. "Bounces didn’t go our way. We played really hard, but unfortunately we just let too many in for us to crawl back.”

The story was similar on Sunday, with Calgary scoring four goals over the span of the first two periods. Sarah Edney and Jocelyne Laroque scored in the third to close to gap to 4-2, but Lovell's empty netter sealed the win.

“They scored well in the first and second period and we were able to hold them down and fight back," Fines said. "We just have to make sure that the next time we play them, [we] contain them in the first two periods. Hopefully by then it’ll give us a chance to win.

"We just can’t be starting late. We [have] to realize who’s on the ice and take them out of the play. That should help us the next time we play them.”

Jessica Campbell recorded a team-high three points for Calgary, while Brian made 32 stops. Liz Knox started the game, but was pulled after giving up four goals on 20 shots. Howe stopped all 10 shots she faced.

"Our penalty kill was really strong," Fines said. "We also controlled the endzone tempo. They scored on a lot of rushes, but we definitely kept the puck in their end and we just couldn’t score."

Les Canadiennes were coming off a bye week, while the Furies had just played their best series of the season. Les Canadiennes came out on top, following a 3-1 victory with a 6-3 win.

"We’re that close, we just have to get over the next little mental hurdle of finishing out the game," Toronto coach Sommer West said. "When we get up a goal, getting up by two goals, or if they score, not taking some time off. Because sometimes when they score and they go up 3-2, we go into a lull for two, three, four minutes and they’re able to put another one away."

Ann-Sophie Bettez scored to give Les Canadiennes a 1-0 lead in the first. The Furies held their opponent to one goal for two periods, until Marie-Philip Poulin and Caroline Ouellette added goals in the third. Carolyne Prevost scored last in regulation to give Toronto its only goal of the game.

“The biggest strength is resiliency...That was nice to see the girls not getting frustrated, just keep on trying and trying and finally get some goals in the net," Les Canadiennes assistant coach Lisa-Marie Breton-Lebreux said.

The Furies took the early lead the next night, thanks to a goal from Sarah Stevenson. The score was close for two periods, with the Furies and Les Canadiennes trading goals in the second. But the third period was all Les Canadiennes, as Bettez, Jordanna Peroff, and Karell Emard all scored. Natalie Spooner finished with two goals for the Furies, while Bettez had a hat trick.

Labonte made 14 saves for Les Canadiennes, while Sonja van der Bliek made her first start of the season and made 48 stops.

While Toronto has returned some players from injuries, defender Laurel Hill suffered a knee injury on Sunday, pushing the Furies to a five-member defense.

"We went to five [defenders] and playing Montreal that is four lines deep, that carries a big load," West said. "I think they did a really good job."

The weekend series continued a trend where Les Canadiennes controlled the offense and protected Labonte.

"Our players are really dedicated at [stopping] the puck, like blocking shots before it gets to the net," Breton-Lebreux said. "That’s something we ask from our players, to make sure they’re in the shooting lanes and that it doesn’t get to the net.”

↑ Sonja van der Bliek: The goaltender made her Furies debut on Sunday against a very good Les Canadiennes team. Toronto's goaltenders (usually Christina Kessler), have been tested this season. It was no different for van der Bliek, who faced 53 shots in the loss, though she made 48 saves.

"She kept us in the game," West said.

↑ Ann-Sophie Bettez: Not to be lost among Les Canadiennes' top point getters and Olympians Marie-Phillip Poulin and Caroline Ouellette is their linemate Bettez.

“At first, she was kind of maybe in the shadow of Caroline and Marie-Philip," Breton-Lebreux said. "She's blooming and really being part of the line and really scoring as well."

Bettez recorded a hat trick on Sunday and finished the weekend with five points.

"Her strengths are really her speed and her ability to always be in a good position in front of the net," Breton-Lebreux said.

Bettez has 13 points, which is third on the team, just behind her linemates Ouellette and Poulin.

"They were doing well before, but now they even understand each other better," Breton-Lebreux said. "And the place, Ann-Sophie knows exactly where to go and that’s why she scored some goals. Like I said, she’s blooming. She’s really blooming with her line.”

"It was really a team effort," Breton-Lebreux said. "Of course, the first line scored a little bit more goals, they have more ice time. But everyone can contribute. We have a lot of depth this year, it’s great."

"Up front, we had a lot of our forwards doing the little things that made them successful, whether it was Jessica Campbell with her speed or Elana Lovell, she scored some big goals again for us," Reid said. "Jill Saulnier has a lot of speed and she used it to her advantage again this weekend."

↓ Toronto injuries: Speaking of Toronto, it seems like the Furies can never catch a break, and this weekend was no exception. Just one week after getting both Kelly Terry and Christina Kessler back, Kessler went down again.

↓ Les Canadiennes and Calgary's grip on the league: When the season started, Les Canadiennes and the Inferno were clearly the league's best teams. And after the first few weeks of the season, that fact has become more prevalent. While no other CWHL team has beaten either of these powerhouses this year, the other teams have proved this weekend that they can play with them.

↓ Balanced scoring: Some teams -- and especially Calgary -- may have enough talented players to distribute its scoring. But both the Inferno and Les Canadiennes struggled to play a full 60 minutes.

For Calgary, the lapses came late in the game. The Inferno allowed the Thunder to battle back late in both games.

The same applies to Brampton, which had a slow start against the Inferno.

"In this league, nobody quits, and it showed this weekend again that you have to be prepared to play three periods," Calgary coach Scott Reid said.