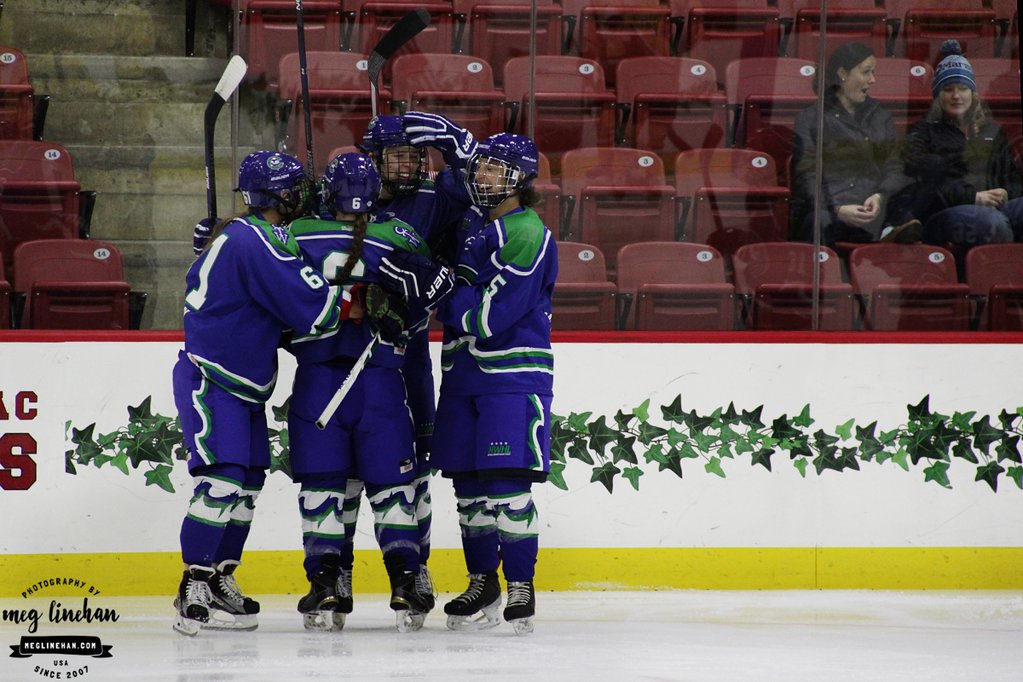 The Connecticut Whale jumped out to what proved to be an insurmountable lead Sunday afternoon at the Bright-Landry Hockey Center in Allston, MA, keeping the Boston Pride winless on home ice.

Connecticut got on the board quickly, as Shiann Darkangelo beat Brittany Ott glove side just 37 seconds into the contest. Midway through the first, towards the end of a penalty to the Pride's Brianna Decker, the Whale would go up 2-0 on a slapper through traffic by Shannon Doyle.

After building their first period lead, the Whale had plenty of success in protecting goaltender Jaimie Leonoff by keeping shooters to the outside and slowing the game down considerably, but the first period still ended with the Pride having the advantage in shots, 12 to 7.

The second period started tighter defensively for both teams, but quickly developed into some dramatic moments. Darkangelo scored her second of the game to increase the lead to 3-0, but a few minutes later, Kaleigh Fratkin was charged with throwing her stick at Rachel Llanes on a breakaway, and Llanes was awarded a penalty shot. The tenacious forward who's been threatening to score for several games did not get her first of the season, though, as Leonoff showed her nothing but stick, and Llanes was only able to graze Leonoff's left pad with her shot.

To make matters worse for the Pride, the Whale scored again shortly after the failed penalty shot attempt to increase their lead to 4-0 on a goal from Molly Engstrom.

Llanes finally got her goal, though, on a semi-breakaway with less than a second to go, shuffling the puck backhand and shooting five-hole on Leonoff to break the Whale's shutout. The goal was reviewed to make sure the puck crossed the line before the clock hit zero, but with 0.4 seconds remaining, the lead was cut to 4-1.

The Pride built off of that goal and went on to have a spectacular third period, peppering Leonoff with 19 shots and getting 2 more goals after spending the majority of their time in Connecticut's zone.

Amanda Pelkey would get her third goal of the season on a nifty wrist shot after a long shift of sustained pressure on the power play. Kacey Bellamy brought the score to 4-3 late with a lethal slapshot from the center point. The Whale put themselves in a very dangerous position by letting a skilled team like the Pride come back in the game, as they took some bad penalties and perhaps felt far too comfortable with a 4-0 lead.

Jaimie Leonoff is able to stop nearly everything she can see, but relying on her to make 30-40 stops in a game may eventually come back to bite them. The team is undefeated, but it isn't without its weaknesses -- throughout four games, they've been consistently outshot by their opponents.

As for Boston, their starts have to be better. They've been caught sleeping early both at home and away, and all three of their losses have started by quickly going down by multiple goals in the first period.