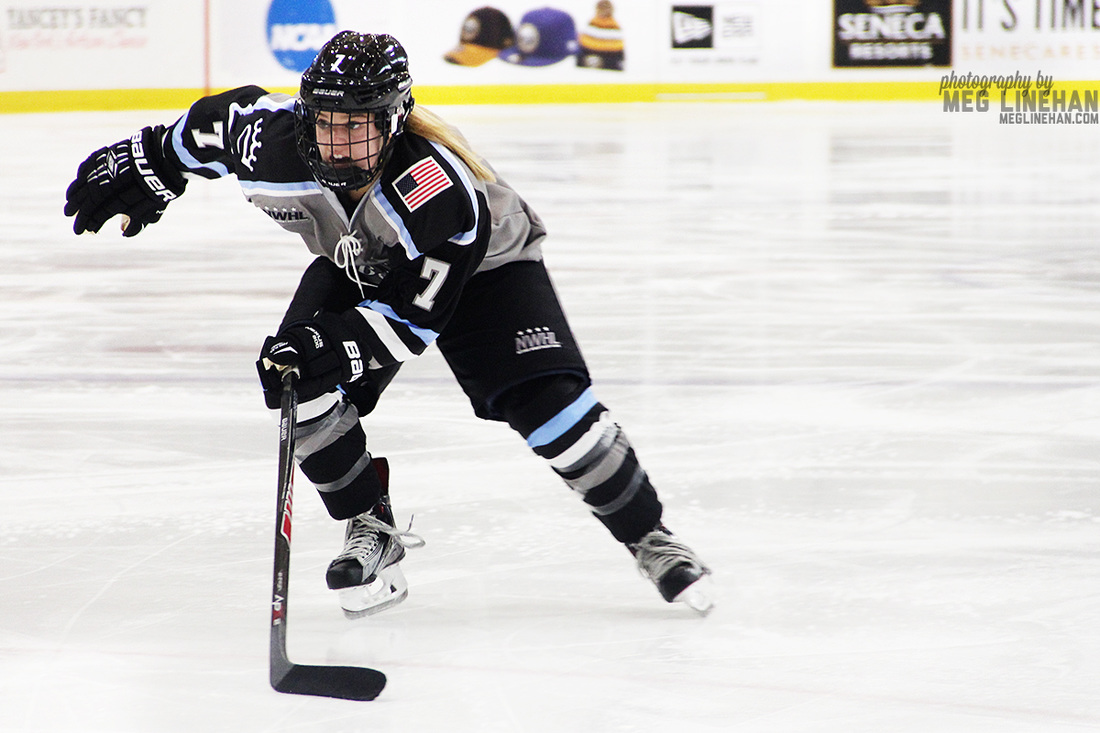 "It's something I never would have thought would happen," said Emily Pfalzer.

Pfalzer, now captain of the NWHL's Buffalo Beauts, is referring to the chance to play professional hockey in her hometown -- an opportunity that the Getzville, NY native was presented with back in September when she signed with the Beauts.

Now, some months later and five games into the inaugural NWHL season, the Beauts are still looking for their first franchise win, but they've come close several times -- and the fan support has been predictably strong, both for the Buffalo team and for the NWHL as a whole.

"With Buffalo being a hockey city, I was not surprised by the incredible support from the community," Pfalzer said.

After all, not only is Buffalo now home to two professional hockey teams, but the city also boasts multiple strong minor hockey programs, including those hosted by the Buffalo Bisons Hockey Club. The city's hosted multiple international tournaments, including the 2011 IIHF World Junior Championships, the 2015 IIHF Women's U-18 World Championships, and the 2015 IPC Sledge Hockey Championships.

Pfalzer, 22, is a native of Getzville, about 18 miles northeast of the city of Buffalo. She attended Nichols School, where she played lacrosse, before joining the Boston College Eagles in 2011 -- but her hockey career goes much further back.

"Every winter, my dad built an ice rink in my backyard. When I was a little over two years old, I would see my brothers outside playing hockey. Being the younger sister, I wanted to do whatever they were doing... that’s how it all started."

She registered 102 points in 147 games with the Eagles -- while playing defense. That included 79 assists, including a career-high 34 in her senior year, along with 23 goals that season.

Pfalzer has also made a name for herself on the USA Hockey spectrum.

She's been a member of the US Hockey National Cup since the age of 14 and has won multiple honors with her country, including a U18 gold medal and a gold medal at the Women's World Championships, as well as participating in multiple other events.

Pfalzer was recently interviewed on the MSG broadcast of a Buffalo Sabres game:

Pfalzer describes herself as a "[defender] who loves to get involved in the rush offensively." She registered five assists in the Beauts' November 22nd shootout loss to the Connecticut Whale, jumping instantly to the top of the league in that category (tied with Hilary Knight).

That game came just a short time after Pfalzer was named one of two captains for the NWHL's first-ever All-Star Game, being held in Buffalo in January 2016. The All-Star Game will involve two twenty-minute periods of 4-on-4 action, as well as a skills competition.

"I think the 4-on-4 format will cause there to be a lot of back-and-forth action, and I'm really excited for that."

Of course, it's hard to talk about the NWHL without at least thinking about the impact that it's having on female hockey players of all ages. All one needs to do is look at the young female hockey players who have lined the rinks of NWHL games, watching gleefully and excitedly receiving everything from high-fives to autographs from the NWHLers -- not just in Buffalo, but across the whole league.

"Our goal is to grow the game of women's hockey, and it's nice to know that young girls are now dreaming of playing in the NWHL."

Pfalzer, who said she's always enjoyed watching players like Nicklas Lidstrom on the ice, called it "a humbling experience to be a part of."

The first four games of the Buffalo Beauts' season each saw Pfalzer as one of the two starting defenders, with a different partner each time: Megan Bozek, Kelly McDonald, Paige Harrington, and Lindsay Grigg. Pfalzer and McDonald reunited as the team's starting pair on November 22.

It's all about mixing and matching to see what works, getting better one step at a time for the Beauts.

"All of our [defenders] are very strong, so the chemistry between the five of us has been great," Pfalzer said.

After playing each of their first five games at home, the Buffalo Beauts now hit the road for several weeks of away games. The road trips will give the team a chance to get to know each other better and spend more time getting closer off the ice, riding the bus and eating meals together.

Though Pfalzer and her team will prepare themselves for the long trips, it won't change their overall game plan, says Pfalzer.

"We're just going to continue to work hard on and off the ice," she said.

The Beauts face the New York Riveters this Sunday for the first-ever meeting between the two teams. The Riveters are on a two-game winning streak and come into the post-Thanksgiving game riding a high note -- but don't count the Beauts out of this one.

"We have been getting better and better as each game has gone on... the key for us is to continue to work hard and focus on one game at a time," Pfalzer said.

Sunday's game between the Buffalo Beauts and NY Riveters sees a 7 PM puck drop, the first evening game for the Buffalo squad. You can catch all of the NWHL action through Cross-Ice Pass, while tickets are available for all the games here.