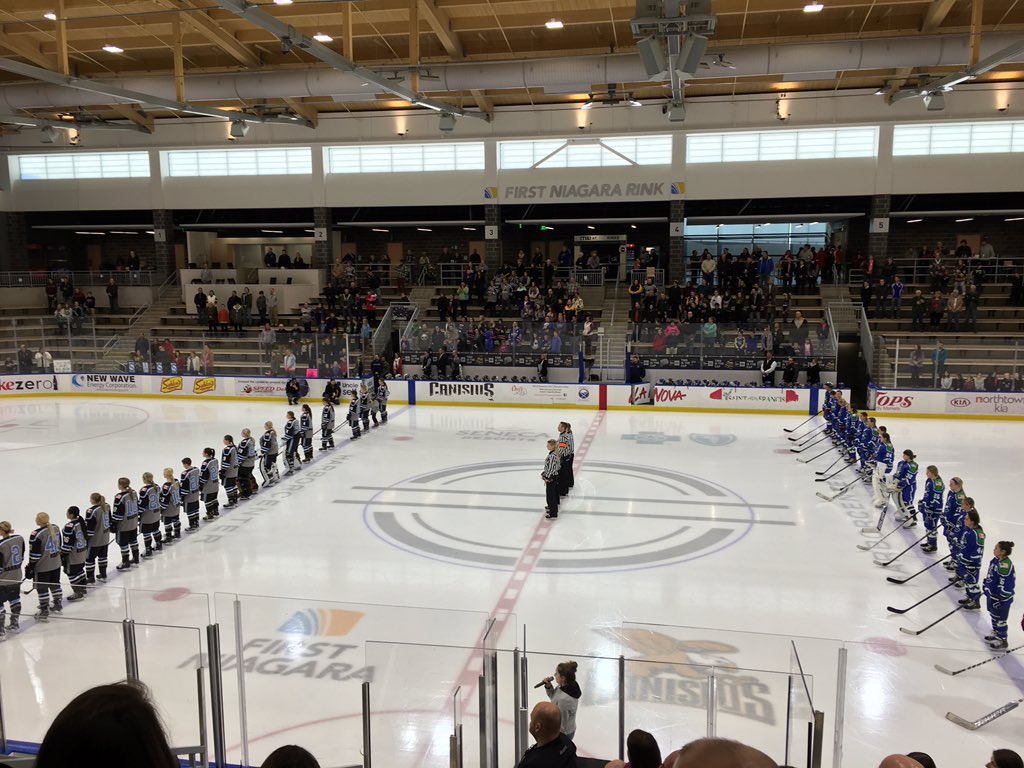 For the first time in the NWHL’s inaugural season, the Buffalo Beauts skated with a full roster...but it may take a little more time for the team to completely mesh, as they narrowly fell to the Connecticut Whale 3-2 after a last-minute goal.

The Beauts, armed with newcomers Erin Zach, Lindsay Grigg, Devon Skeats, and Jessica Fickel -- all players whose visa issues were finally resolved -- played arguably their best period of hockey in the opening frame of Sunday’s game.

They were strong on the puck and put shots through, but were unable to take advantage of several power play opportunities.

In addition to those newcomers in the lineup, we also saw East Amherst native Kimberly Sass make her NWHL debut in net for the Beauts. Brianne McLaughlin, who recently returned from Sweden and the Four Nations Cup, was her backup. Amanda Makela, the Beauts’ third netminder, finally joined the team after her visa issues were resolved, too; she skated in warmups, but didn’t dress for the game.

Things fell apart for Buffalo in the second period, and the Connecticut Whale picked up where Buffalo lapsed. A play that appeared to be harmless resulted in a shorthanded goal for the Whale. Kelly Babstock tallied her third goal of the season with one second remaining on a penalty to Molly Engstrom.

The Whale went up 2-0 when Kelli Stack notched her second of the season, and the Beauts couldn’t keep up. It seemed as though they focused a lot on passing rather than shooting at times, with moves that were too easily broken up by Connecticut skaters.

Buffalo wasn’t ready to lay down just yet, though. They dominated most of the third period, tying up the game and keeping it incredibly close to the very end.

In her first-ever NWHL game, Skeats scored her first goal in the league -- and a beautiful move at that, just 53 seconds into the third period. Shelby Bram and Megan Duggan registered assists.

Less than four minutes later, Kourtney Kunichika’s second goal of the season tied the game at two. All of a sudden, it was a completely different game.

The energy from the crowd was palpable throughout the night, with several "Let’s Go Buffalo" chants erupting mid-game.

The teams entered the final minute in regulation tied at two, but that changed quickly when Whale forward Danielle Ward potted a goal on a bad bounce with just 55.8 seconds left to put Connecticut up 3-2, and that was that.

After the game, Skeats’ energy was positively radiating out of her -- you could just tell by her persona and attitude that she was incredibly excited to make her NWHL debut, and to get her first goal on top of it. She spent the game on a line with Shelby Bram and Meghan Duggan, forming a quick, powerful trio.

"It was a long time coming. I was really looking forward to playing this game, and to be able to contribute to my team is a pretty incredible feeling,” Skeats said.

"I was going so fast, I guess I just shoved it in top corner and it went and I was like ‘Oh my God!’ It was a great feeling." -- Devon Skeats on her first NWHL goal

With the Riveters’ win on Sunday, the Beauts are left as the lone team in the NWHL without a win, but as some of the players have said in the past, it was expected from the beginning that Buffalo would be a team that would come together slowly. Now that they’ve got all their main pieces, things should start to progress.

Unfortunately, a side effect of the introduction of the new players to the lineup meant that practice players, like Kelley Steadman, had to come out. Based on coach Ric Seiling’s post-game comments, it seems like NWHL rules make it so that practice players can only play if there is an opening due to injury (or visa issues, among others) and cannot be substituted for healthy players.

Steadman was signed as a practice player, since she was unable to fully commit to the time the team required with her off-ice job and commute. In the first three games, she absolutely dominated the ice and was second in the league in scoring, behind Boston’s Brianna Decker. Now, we don’t know when or if she’ll be back in the lineup.

Sunday’s game was one of the most physical, rougher games the Beauts have seen this season. As Skeats said, that sort of play is almost to be expected when teams are so close and when one makes a comeback from a deficit, something we haven’t seen much in the league.

Sass got to make her NWHL debut in front of about 25 supporters: friends, family, and former coaches. At least two groups on opposite sides of the ice had signs with her name, and the cheers were loud and plentiful as she took the ice and made save after save.

With McLaughlin having played each of the Beauts’ three games so far, Seiling said this was a good opportunity to put Sass in, allow her to play in front of the local crowd, and give her the chance she deserved.

The Beauts rebound for a rematch with the Whale next Sunday, 3:30 PM at HARBORCENTER, and they plan to have the energy to fight for their first win.

"We’re going to come out ready to go and fired up," Sass said. "We did not enjoy losing this way, to this team."