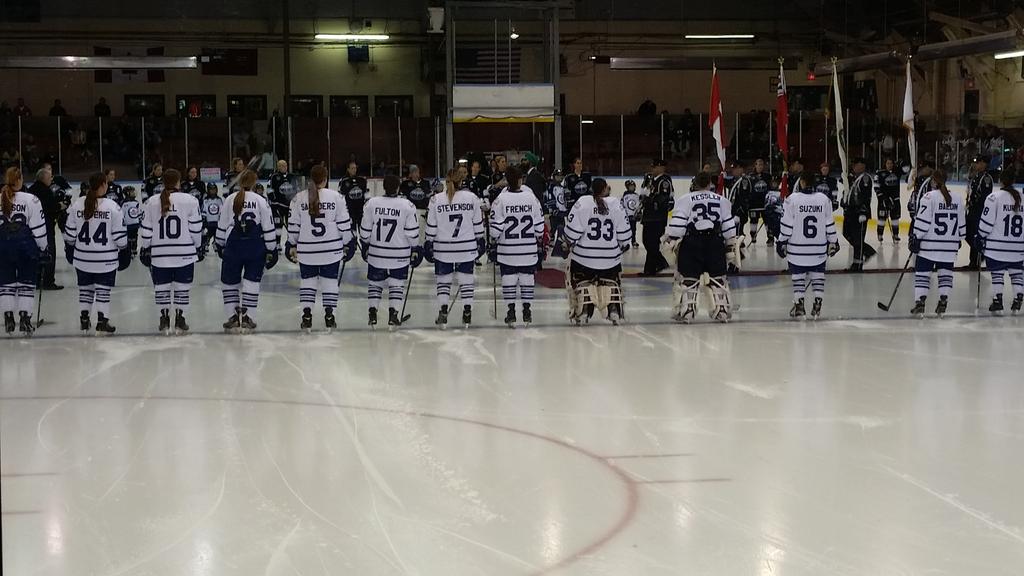 In the second weekend of the season, Calgary faced its first test of the season in Boston. The Inferno came away with two victories, while the Brampton Thunder also earned a sweep by taking down Toronto.

Although Les Canadiennes and their top line were off this week, the CWHL saw no shortage of goals. The Inferno netted eleven over the weekend, while the Thunder added nine.

The Inferno opened their season against the Boston Blades, debuting what's expected to be the best team on paper. The Inferno put up 11 points on the Blades over the weekend, sweeping Boston for its first two wins of the season.

The Blades struggled in the beginning of both games before improving, Boston head coach Brian McCloskey said.

"Some of it was them making good plays, some of it was us just not being defensively sound," McCloskey said. "But after that, I thought we settled down and played pretty well."

Genevieve Lacasse started both games for Boston, making 91 saves over the weekend. For Calgary, the net was split between Delayne Brian and Kathy Desjardins.

The Brampton Thunder earned their first wins of the season with a sweep of Toronto. On Friday, Brampton emerged with a 3-2 victory that saw Candice Styles, Jamie Lee Rattray, and Jess Jones score. For Toronto, Alyssa Baldin scored a goal.

On Saturday, the Thunder had six goals. Rebecca Vint scored twice while Rattray, Jones, Laura Fortino, and Dania Simmonds all added goals. After the Thunder took a 4-0 lead, Toronto's Emily Fulton, Natalie Spooner, and Jessica Vella scored in succession to cut the deficit to 4-3. Vint's two goals in the third cemented the win.

"In the third period, I liked the fact that we came together in the dressing room and laid some things out. I was really happy with the effort in the third and the comeback that we were trying to mount...Hopefully we can push forward with that coming into this weekend.”

In net, Christina Kessler started both games for Toronto and made 89 saves over the weekend. Erica Howe and Liz Knox split netminding duties for Brampton.

"Relying on Christina Kessler every game to stop every shot is not our game plan," West said. "I think on Saturday she really saves us...that could've been a disastrous game."

Three Up, Three Down:

↑ Calgary - The Inferno entered the season as the league's best team on paper. Before the season, Calgary general manager Chantal Champagne said the toughest challenge would be translating what's on paper to what's on the ice. So far, that hasn't been an issue for the Inferno.

↑ Genevieve Lacasse - Yes, the Blades gave up 11 goals on the weekend. But on Saturday night, Lacasse faced 56 shots and made 49 saves. The next night, she followed with 42 stops. On that note, all the losing teams had goaltenders with over 80 saves on the weekend, as Christina Kessler had 89 for Toronto.

"Against a team like that, you’re not going to limit the fact that they’re going to get quite a few shots," McCloskey said. "You’re going to have to. The key is, can you limit the Grade A scoring chances?”

↓ Boston's defense While Lacasse is one of the best goaltenders there is, the Blades still allowed 11 goals on the weekend...and they gave up 102 shots.

“We give up a lot of scoring chance opportunities off of transition just because we’re not doing a good job in the neutral zone, so that’s an area we got to get better at," McCloskey said.

"It’s not always the number, it’s the quality. I was impressed with how our kids defensively did a better job as the weekend wore on, adjusted to their speed and skill."

↓ Injuries The Furies are still hurting from the losses of Jenelle Kohanchuk and Julie Allen, which has stifled their offense. So far, Toronto has eight goals on the season.

↓ Toronto's defense The Furies knew defense would be a weakness heading into the season, even with Christina Kessler as the team's netminder. Kessler finished with 89 saves on the weekend, but it still wasn't enough to earn a win.