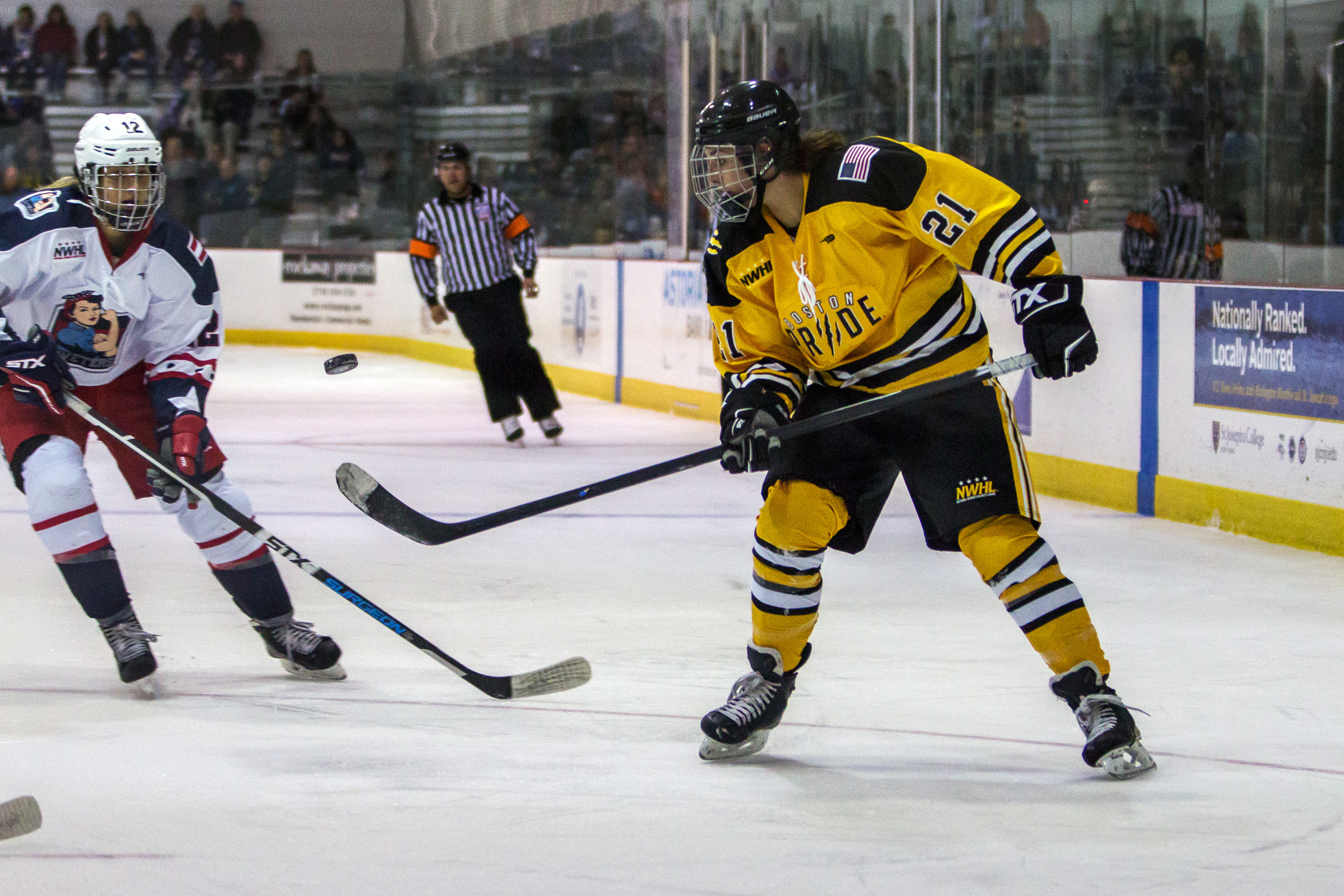 Things went from bad to worse for the New York Riveters as they fell to the Boston Pride by a score of 7-1 in their home opener. It was a strange night all around, as the game started about an hour late due to a traffic/transportation mishap for the away team, but the Riveters only have 16 games left in the regular season to address issues at both ends of the ice, and tonight was not an improvement upon last week's loss to the Connecticut Whale.

The Pride's Zoe Hickel scored less than a minute into the game. Despite that, the Riveters seemed to have improved their passing game, and their zone entries seemed crisper than they had in their previous tilt. Their five-member defensive squad seemed to come together to create some quality rushes early, especially Ashley Johnston and Gabie Figueroa. The Riveters' physical style even earned them two power play chances in the first period, but they failed to capitalize on either.

At 17:34 of the first, Brianna Decker made her presence known as the Riveters defense opened up and gave her tons of time and space to put a backhand move on Nana Fujimoto, giving the Pride a 2-0 lead.

Gabie Figueroa would score the Riveters' first regular season home goal early in the second from in tight, taking her own rebound around the net to stuff it in behind Lauren Slebodnick.

Towards the end of the second period, Boston's Marissa Gedman was penalized for tripping at her own blueline. This crucial power play chance for the Riveters to tie the game instead turned into the point of no return when Brianna Decker took the puck the other way for a shorthanded goal to increase the lead to 3-1.

The final frame would be an unmitigated disaster for the Riveters, however -- though the period started with a comeback still in sight, the wheels fell off completely in the last 10 minutes of the game.

Jordan Smelker scored her first of the season on the power play after the Riveters were assessed a bench minor for delay of game. The Pride would then get two goals in just 31 seconds from Blake Bolden and Corinne Buie to build an insurmountable 6-1 lead. Zoe Hickel made it a touchdown with just 12 seconds to go, and despite most of the goals being scored against Lundberg, who came in midway through the game, Fujimoto will take the L in her stats column.

It's unclear why a game that seemed relatively close through two periods got so wildly out of control for the Riveters, but some good guesses would be defensive posture and frustration.

While the Riveters seemed to improve their passing and skating in a short amount of time since their preseason, they still did not score easily, and it wore on them as the game went on. They also could have prevented some of their goals against by tightening up in the neutral zone and playing better player-to-player defense. And, of course, capitalizing on their early power play chances would have done wonders.

As for the Pride? Their roster resembles the CWHL's championship Boston Blades squad from last season, but with even better depth. While Zoe Hickel and Amanda Pelkey may be rookies at the pro level, they've been outstanding, and the relative experience the Pride have at every position can't be overstated. Boston improves to 2-0 on the season as a result of that experience and talent, but the 7-1 score in tonight's game was more on the Riveters' late-game breakdown than anything else.

Next week, the Pride return to Buffalo for a rematch of their season opener, and the Whale visit Aviator in Brooklyn for the first time to face off against the Riveters.