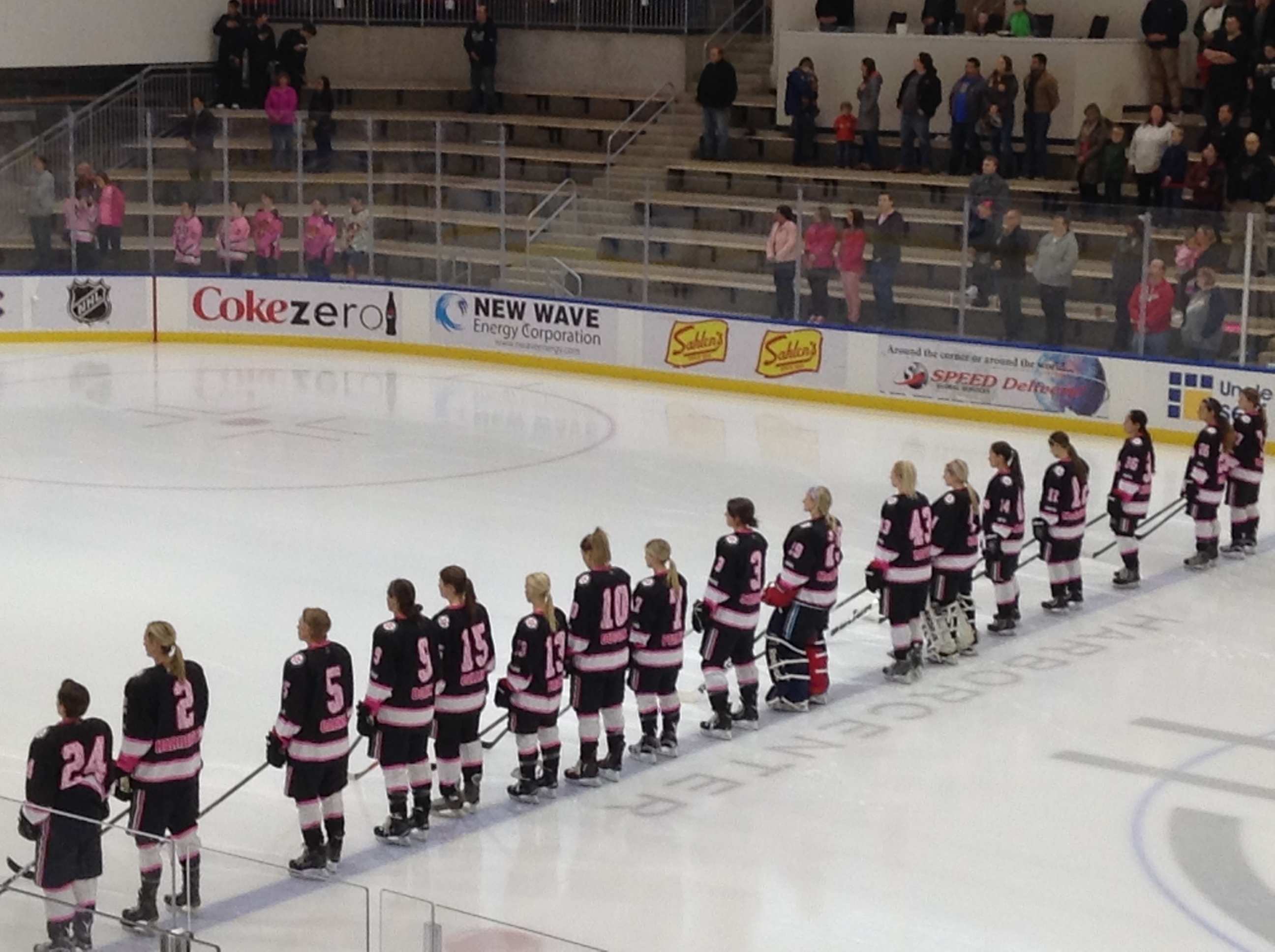 Time and time again, the Buffalo Beauts were unable to take advantage of valuable power play opportunities -- and in the end, it cost them, as they dropped a 5-2 decision to the Connecticut Whale on Sunday in a “Strides for the Cure” game that was focused on breast cancer awareness.

The Beauts, who suited up in black and pink jerseys that were specially designed for Sunday’s game, had seven power play opportunities through 60 minutes, but were ultimately unable to capitalize on them. That included three power plays in the third period when the Beauts were down by just one goal, but the chance to tie it up slipped away from them.

At times, the Whale were outshooting the Beauts by seemingly large margins that would make the game appear to be significantly farther apart than it actually was. For much of the game, it was closely contested, with the Beauts just a step or two off from closing the gap.

The Beauts are now 0-2 on the season, while the Whale are undefeated, having won 4-1 in their first game -- the first ever in NWHL history -- last week over the New York Riveters.

However, help could be on the way for the Beauts, once visa issues are resolved that have continued to keep multiple players out of the lineup. Erin Zach, Lindsay Grigg, and Jessica Fickel are among those Canadian players who have been unable to secure visas.

The NWHL has said that it’s working around the clock to rectify the issue, but at this point, it’s still uncertain if those women will be able to suit up next Sunday against the Boston Pride.

Whale defender Kaleigh Fratkin led all skaters with three points on Sunday afternoon, notching a goal and two assists. For the Beauts, it was forward Kelley Steadman -- still technically a practice player for now -- who registered two points, (a goal and assist).

The Whale opened the scoring just over four minutes into the game on a goal by Alyssa Wohlfeiler. Lindsay Berman, who would end up getting injured later in the game, notched an assist.

A short time later, Hailey Browne headed to the box for the Beauts, as she was served with a body-checking penalty. Though it was the Whale who headed to the power play, it would be Buffalo that would end up scoring.

With the Beauts shorthanded, Meghan Duggan notched her first goal in the NWHL to tie the game at one. Kelley Steadman tallied the assist for her second point in a Beauts jersey.

In the midst of the second period, it was Connecticut’s turn to take their second lead of the night as Sam Faber slapped one in front of the point. Fratkin notched an assist, her first of three points on the afternoon.

Just like that, the Whale had their second lead of the night -- and the Beauts were ultimately unable to come back.

The second period saw Whale defender Berman suffer what appeared to be a knee injury. She slowly began to crawl her way to the bench while play continued, until the referee finally blew the whistle to stop play. She was eventually helped off the ice with the aid of a teammate and staff, and did not return.

With a 2-1 score after the second period, it was still anyone’s game. The Beauts appeared to tie the game early in the third, but the goal was called off due to a crease violation. Though Buffalo put good pressure on the Whale in an attempt to get the goal back, it was Connecticut who scored next.

Kate Buesser, former Harvard and Boston Blades player, notched a third goal for the Whale to make it a two-goal game as the puck slid in behind Brianne McLaughlin. Fratkin also tallied her second assist of the afternoon.

Steadman would close the gap to a one-goal game later in the third for her second goal of the season for the Buffalo Beauts, but ultimately, they couldn’t finish off the comeback.

The Beauts had several chances, but they just couldn’t put it away. A breakaway by Buffalo native Maggie Giamo wasn’t buried. Other good chances missed the net by mere feet, while other solid chances found their way through and right to the Whale netminder, Chelsea Laden.

A late penalty to Giamo (body-checking) with just 2:18 left on the clock and the Beauts down by just one goal took the wind out of Buffalo’s sails. Molly Engstrom tapped in a power-play tally just 11 seconds in, and Fratkin later tapped in an empty-netter, to seal the 5-2 win for the Whale.

In the end, the Whale outshot the Beauts by a margin of 43-34. McLaughlin, Duggan, and Steadman were named the three stars of the game.

Next weekend for the NWHL will see rematches of its opening weekend games, as the Boston Pride head back to Buffalo and the Riveters host the Whale for the first time.

The Buffalo Beauts will be auctioning off the pink and black jerseys worn during Sunday’s game at a later date.

Game stats (should be available at this link soon): NWHL.hockeyshift.com