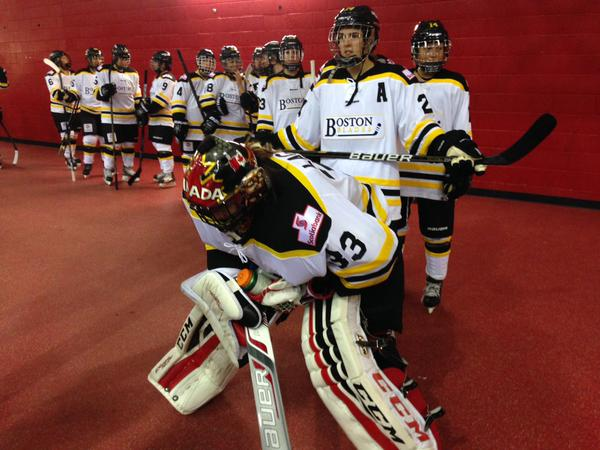 The CWHL kicked off over the weekend. The Boston Blades and Toronto Furies met in a low-scoring series split, while Les Canadiennes swept Brampton by a combined score of 9-2.

It's early in the season, but the weekend play showed that Boston will be a tougher team to beat than expected, while Les Canadiennes may have the best offense in the league.

The Blades and Furies met for a couple of low-scoring contests. Toronto won the season opener 2-0, thanks to goals from Alyssa Baldin and Emily Fulton. The next night featured an early Boston lead from Ellie Tremblay, but Jessica Vella tied things up 5:38 minutes later.

After a scoreless third period and overtime, the game went to a shootout. Rookie Kristina Brown earned the winning goal, while Geneviève Lacasse stopped the three shots she faced. Lacasse finished the night with 40 saves and 85 total on the weekend.

"Our goaltending was outstanding...Lacasse was absolutely rock solid," Blades coach Brian McCloskey said. "We made plenty of mistakes in front of her, but overall I think as the weekend progressed we got better defensively, minimized our turnovers [and] took better care of the puck."

The Furies played without two of their most important forwards, Julie Allen and Jenelle Kohanchuk. While defense was pegged as the team's biggest weakness, the Furies only allowed 26 shots on net each night. Christina Kessler stopped all but one, and currently has the league's highest save percentage.

For the Blades, it was their first win for a team with a lot of offseason turnover.

"We’re inexperienced, no question about it, and we’re going to have our challenges," McCloskey said. "But I was encouraged. I was encouraged more than anything by the effort they put out. They really worked hard."

Les Canadiennes hosted Brampton in their season opener, winning 4-0 on Saturday and 5-2 on Sunday. Marie-Philip Poulin and Caroline Oullette led the way, notching five points apiece over the weekend.

Charline Labonté backstopped both games for Les Canadiennes. She allowed two goals total, but only faced 36 shots over the weekend. On the other end, Brampton split the weekend between Erica Howe and Liz Knox. Jess Jones and Jamie Lee Rattray scored for the Thunder.

This was the first test for Brampton's new head coach, Tyler Fines. The Thunder, who are hoping this will be a turnaround season, are trying to build from the blue line out.

It's still early in the season, but so far it looks like Les Canadiennes may have the best offense in the CWHL. Poulin, Oullette, and Ann-Sophie Bettez combined for 12 points.

“A good strength for us was our speed and our ability to generate offense," Les Canadiennes assistant coach Lisa-Marie Breton-Lebreux said.

"Something we have to improve would be our defensive zone coverage. We’ll work on that as well."

Three Up, Three Down:

↑ The top line for Les Canadiennes: Marie-Philip Poulin, Caroline Oullette, and Ann-Sophie Bettez are the best line in the CWHL. Poulin and Oullette each finished the weekend with five points.

“I think it’s a matter of all three of them working together. Ann-Sophie Bettez is also doing a great job forechecking [and] backchecking," Breton-Lebreux said.

"As for Caroline and Marie-Philip, they’ve played together on the national team. Marie-Philip likes to feed the puck and Caroline is shooting a lot lately, so I think that works well for that reason."

↑ Ellie Tremblay: The forward switched to defense. While no Blades missed the weekend games, injuries on the blue line pushed Tremblay toward more playing time.

"Obviously Tara Watchorn was a rock back there for us, but Ellie is very complementary," McCloskey said. "She’s very good with the puck, has terrific puck-handling and passing skills, so she’s a really good distributor and she did a nice job.”

↓ Blades Critics: With the biggest roster turnover in the CWHL, this was pegged as a rebuilding year for the team. But General Manager Krista Patronick said the Blades would surprise people, and it took Boston just two games to earn their first win of the season.

↓ The Offense: So far, this applies to every team that isn't Les Canadiennes. While Les Canadiennes put up nine goals, Brampton, Boston, and Toronto combined for seven goals over the weekend. Part of that fell to goaltending, thanks to the efforts of Christina Kessler, Geneviève Lacasse, and Charline Labonté.

↓ Brampton's Defense: Les Canadiennes is a tough challenge for any team, but the nine goals allowed is a little disappointing for a Brampton team that's trying to shore up its defense. The Thunder also need some offensive support from their blue line.