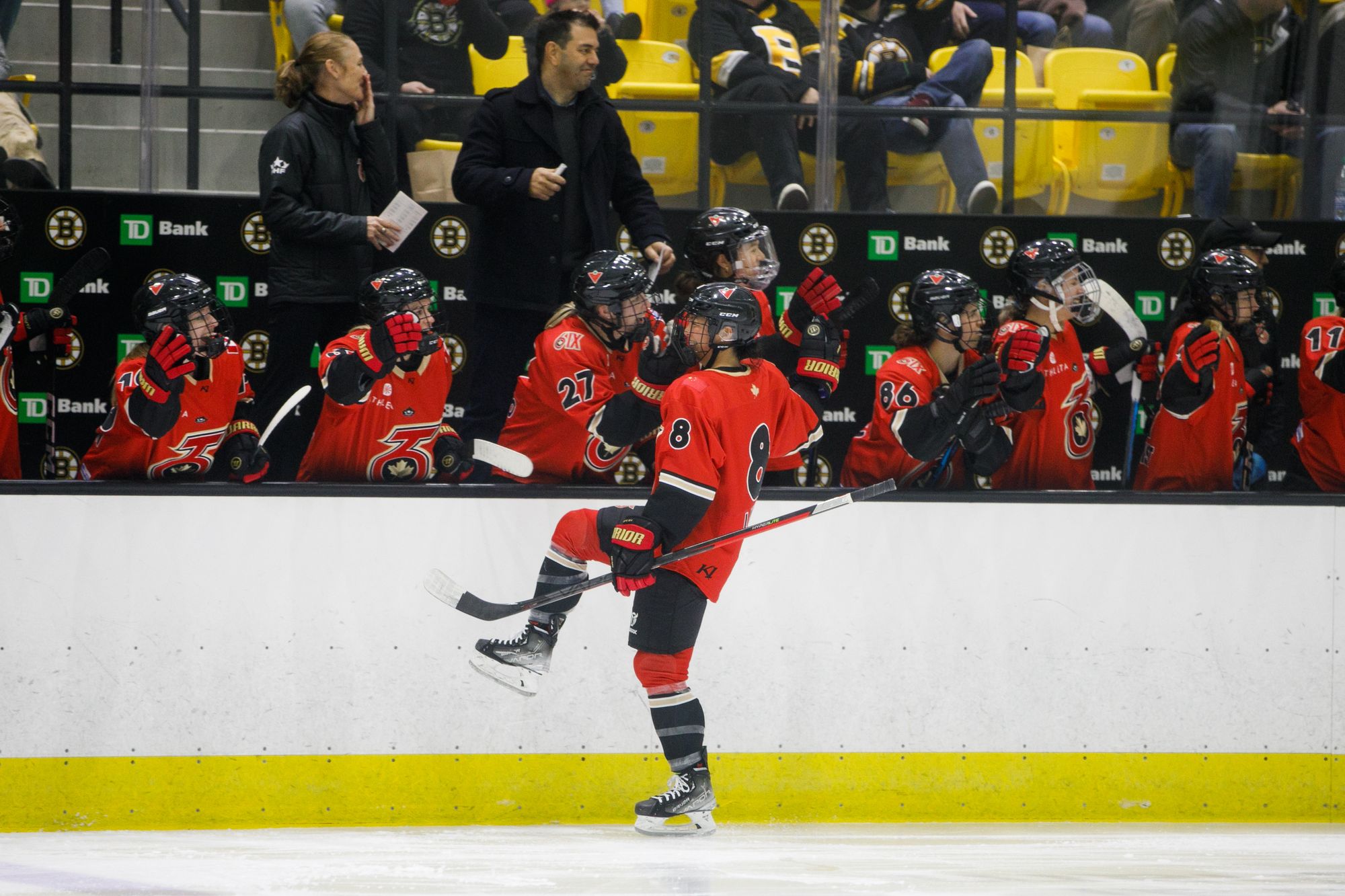 Any time you get the two best teams in a league together to face off, it's bound to be a good matchup. This past weekend's series between the Boston Pride and the Toronto Six was no different. Entering the weekend, the Pride remained undefeated, while the Six were just a few points back.

Although the Six didn't win Saturday, they certainly made a game of it and kept that momentum going into Sunday's rematch. Early on, Toronto had several good scoring chances as they put pucks on net. They killed an early penalty kill, staved off dangerous opportunities by the Pride and were outshooting Boston by a 12-3 margin as the midway point of the first period approached.

The effort finally paid off when Michela Cava opened the scoring with just over five minutes left in the period. After Shiann Darkangelo won the offensive zone faceoff, she got to the puck to Cava, who made her way to the front of the net. Cava capitalized on a bouncing puck, tipping it over Schroeder's left shoulder.

Just 42 seconds later, Brittany Howard doubled the lead on her first goal of the afternoon. After a Pride player fumbled the puck a bit, Howard poked it loose and shot off a top-shelf goal from the faceoff dot to the goaltender's right.

As Toronto's momentum continued to surge, Dominika Lásková made it 3-0 in favor of the Six just a few minutes later. Lásková got around a Boston player along the boards, took the puck to the front of the net and potted the goal from the slot.

After just 17:13, head coach Paul Mara pulled Schroeder, who had allowed three goals on 19 shots faced. Lovisa Selander came in to her relief, but wound up allowing four goals on 26 shots faced in 42:47.

The Pride finally got on the board before the end of the opening frame. Just over a minute after Lásková's goal, Loren Gabel grabbed a pass from Becca Gilmore, picked a corner from the slot and beat a screened Elaine Chuli.

Boston carried their own momentum from Gabel's late goal into the early part of the second period. After an early jump, Jillian Dempsey broke up an attempted Toronto play near center ice. Christina Putigna picked up the puck and came in to the zone with Dempsey and Allie Thunstrom, eventually sniping it top corner.

As the second period went on, the Six dominated possession and had a few good chances, but it would be the Pride who would tie it before any further Toronto offense. Allie Thunstrom, showcasing her incredible speed, gloved down a pass, raced up the right side of the ice and got behind the Toronto defenders before putting it in the net, top-corner over Chuli's right shoulder.

Quickly, what had started as a dominating Toronto effort turned into a 3-3 tie thanks to a much more even-keeled second period. After the two goals, momentum really could've swung in Boston's favor as the Pride found themselves with two big power plays just past the halfway point of the game. Critical penalty kills from Toronto kept the game within reach.

As Kati Tabin exited the penalty box after a delay of game call, she executed a back-and-forth passing session with Howard, who took a sharp-angle shot from below the faceoff dot to Chuli's right to regain the Toronto lead.

Three more goals in the third period would solidify the victory for the Six. Leah Lum provided a bit of insurance early in the third when she picked up a loose puck after a battle along the boards, threw it on net from below the faceoff dot and beat the netminder.

The Pride had a lot of time to work with, down by only a pair of goals with over ten minutes left in regulation. Instead, it was the Six who found the space and time to score not once more, but twice. Cava potted her second of the afternoon, lifting the puck under the crossbar from the doorstep in front of the net. Lexi Templeman also scored, knocking a bouncing puck past Lovisa Selander, who had gone down early.

Handing the Pride their first loss of the season was undoubtedly a great feeling for the Six, who are now just one point back of first place in the PHF. Chuli made 30 saves on 33 shots faced, while Lum, Howard, Cava and Tereza Vanišová each recorded two points. Darkangelo was 18-9 in the faceoff dot.