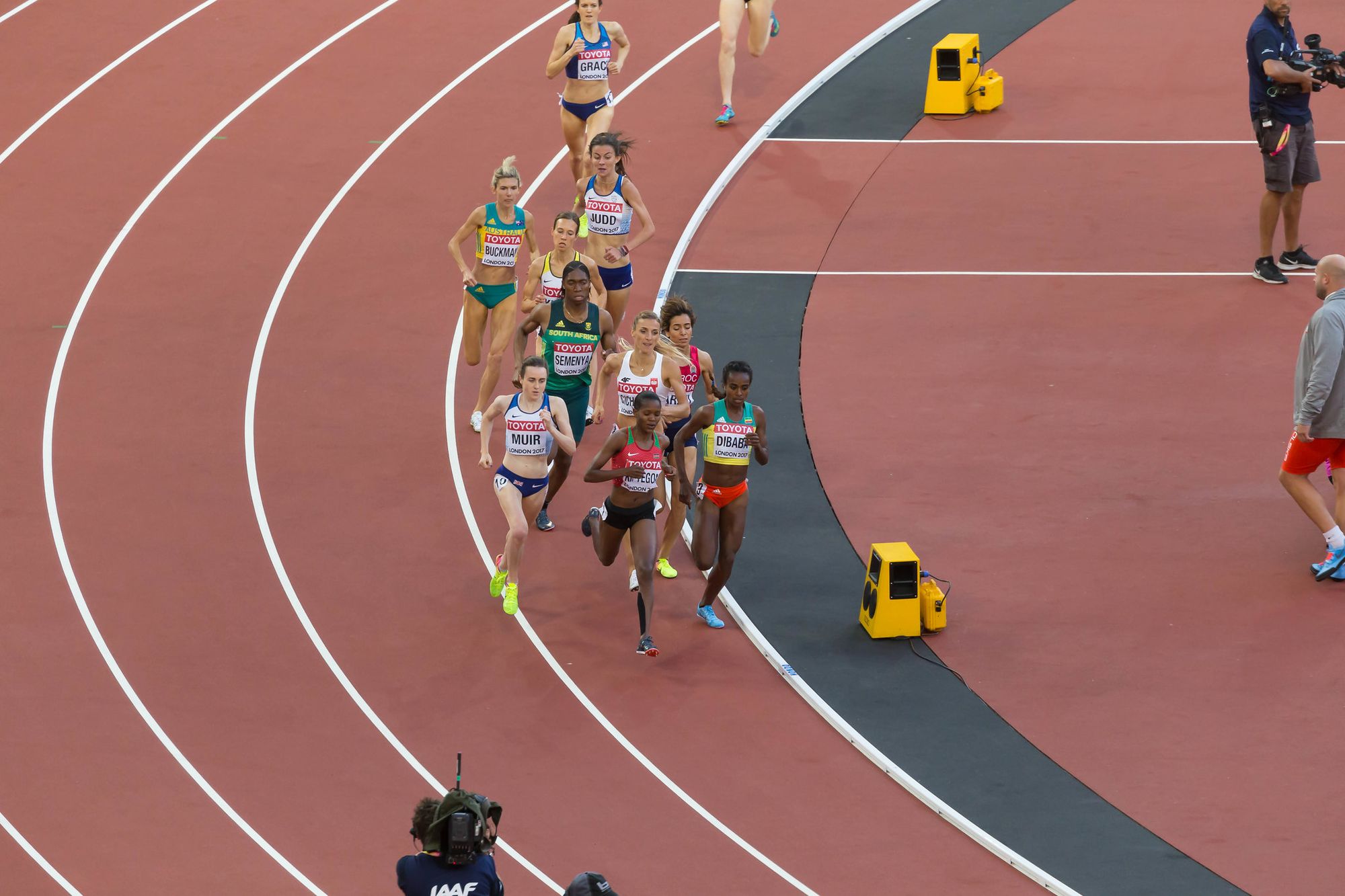 In June of 2022, I tuned into the World Track and Field Championships to watch the women's 1500-meter race. As the fastest women on the globe lined up at the start line, the camera zoomed in on Faith Kipyegon, the Kenyan 1500m gold medalist in the last two Olympics. The announcers failed to mention her accomplishments, instead marveling, "She's at the top of her game, and she's a mom!" -- as if viewers should be surprised that these two statements can coexist, let alone work in concert.

This type of commentary is common. In many women's races, announcers draw attention to the mothers in the elite running fields, but rarely point out the fathers poised to race. If the fixation on mothers were about bringing light to the fact that corporate sponsors have used mothers for advertising while offering minimal support to these same mother-athletes -- or that women's contracts have been reduced and sometimes cut completely during and after pregnancy -- or that childcare often falls to women, making it difficult to balance career and parenthood, then the comments might be constructive.

Attention is not focused on the mothers lining up to race to advocate for any of these issues that in fact make their accomplishments even more remarkable, but because the running world views pregnancy and birth as disadvantageous events. Being a woman in and of itself is seen as disabling. These comments about mothers reflect a belief that women's bodies are "other" and that a person cannot be expected to do the things they did before bearing children, let alone the things cis men's bodies can do.

On a surface level, in 2022, it seems that we have moved past these beliefs that position women at automatic disadvantage. Indeed, many have returned to competition after having children and continued not only to improve, but excel, achieving personal bests and setting records. Last year Keira D'Amato set the American record in the marathon at 37 after giving birth to two children and just took down another 24-year old American record in the 20k early in September. Allyson Felix won her tenth Olympic medal at the 2020 Olympics after giving birth in 2018. Alysia Montaño returned to competition a year after having a child and anchored the American record-setting 4x800 meter relay in Nassau, Bahamas in 2015.

It's not just anecdotally true that athletes run as fast, and faster, after giving birth as they did before. New scientific evidence documents and quantifies what we are witnessing on the world stage. Canadian researchers led by Francine Darroch at Carleton University in Ottawa just published a paper demonstrating that elite competitive women runners not only can but do return to the highest level of competition after having children.

The authors examined a cohort of 42 elite and world-class middle and long distance runners. They found that of the study participants who planned to return to the same level of competition, 60% did so in one to three years following pregnancy. Nearly half of these athletes improved their performances.

"In the past, [pregnancy has] been seen as the endpoint of an individual's career," Darroch said. This belief was reflected in athletes' contracts and brand support, or lack thereof. When salaries are cut or reduced in response to pregnancy, sponsors communicate the expectation that the athletes will get slower, therefore, they are worth less, or nothing at all.

Allyson Felix, Alysia Montaño, and Kara Goucher are credited with pushing Nike to expand its maternity policy in 2019, after the three women went public about how the biggest sponsor in elite running had failed to provide salary protections for pregnant athletes. All major shoe companies have followed suit in expanding maternity coverage for sponsored athletes, adding similar salary protections. The narrative has shifted, but only after tremendous pressure and vocal calls for support from the athlete mothers themselves.

Dr. Sarah Lesko has observed the evolution of women's running for decades. She captained her collegiate cross country team at Yale and went on to become a physician before pivoting to philanthropy, athlete management, and corporate development at Oiselle, a women's running apparel brand. "How mom runners are perceived has changed drastically in the past 12 years," Lesko said. "Mom runners are very empowered at the moment."

It's true that these runners have more power and visibility than they ever have before. It's true that they are making waves on the world stage and rewriting the narrative of what is possible after having kids. So why then are their record-breaking performances still surprising? Why do commentators still suggest it is miraculous for athletes to return to sport after having kids?

It is because all athletic performances are evaluated in the context of a sport built by and for cis men. At their most basic level, all running achievements are filtered through a binary and cis-male-dominated framework. It only seems surprising that women continue to excel after pregnancy and birth because cis men do not go through these events, and the running industry was not envisioned for people who do go through them. When our expectations are attuned to the trajectories of cis male bodies, everything else is seen as a deviation from normal.

This male-centric lens permeates every level of running. Even the evidence itself reflects a stunning lack of investment in women's running, as the body of research investigating how pregnancy affects training and performance is almost nonexistent. Darroch's study examined 42 participants, which may not sound like a lot, but it is the largest and most high-powered study of its kind to date.

"Most research is done and has been done in the past by males and for males," Darroch said. "Men in positions of power determine what the funding priorities are." In the sport of running, maleness is prioritized at every level, and its assumed superiority is used as a discriminatory cudgel against athletes of all genders and identities.

Girls and afab (assigned female at birth) children involved in running learn from a young age, both explicitly and implicitly, that puberty will slow them down. Puberty is framed as a process that needs to be fought, where girls should maintain a lower body fat percentage and emulate a physique as similar as possible to that of their male peers.

As early as middle school, I remember comments praising me and my female teammates for our "boy bodies." Our prepubescent bodies, devoid of curves, were considered an asset. My peers who developed breasts and hips were expected to get slower and were not given uniforms that fit their developing bodies. Up until puberty, girls and boys are on relatively similar running performance trajectories, but at puberty, we were told, boys got better, while girls, as their bodies became less like boys and more like women, got worse. Deviation from this was and is perceived as a cost to performance.

Menstruation, too, is often viewed as disabling. The narrative that "becoming a woman" means giving up one's identity as a competitive runner was dominant when I was an adolescent in the sport, and it persists today. As a young runner who showed some early promise, I understood that maintaining a low body fat percentage and staying in my "boy body" might also delay menstruation.

While no one ever praised me for missing periods, I never discussed my amenorrhea with a coach until I was 25 and menstruating regularly for the first time in my life. For many years, I viewed not getting my period as one less complication, one less hassle of the female body. I felt special, more aligned with my male peers, as if I had bypassed female puberty and could simply continue on with my linear athletic development (which, spoiler alert, did not continue this way). The long-term health risks of amenorrhea and relative energy deficiency in sport (RED-S) were never explained to me. Indeed, many talented runners, including Mary Cain and Lauren Fleshman, have shared stories of experiencing pressure to lose weight, in turn losing their periods for years at the expense of their health and athletic performance.

In fact, most afab bodies follow a different "performance curve" than most amab (assigned male at birth) bodies do, yet the more linear path of gradual, steady improvement typical of many amab bodies is still perceived as the norm and expected from everyone else. "The timeline of college sports is built for boys," Lesko said. "Women's bodies from 18 to 22 are perhaps the least responsive to exercise inputs that they will ever be in their entire lives, and yet that's when the pinnacle of athletic achievement is supposed to happen."

The entire sports system is constructed to showcase this rigidly gendered model, where cis men's bodies come out on top, and everything else is substandard. But the expectation that all bodies follow this same trajectory for peak athletic performance is deeply flawed, and has devastating consequences.

Across the board, girls drop out of sports at a significantly higher rate than boys do, depriving them of the many benefits of sports -- better health through exercise, development of resilience, leadership skills, friendship, and connections. Simultaneously, girls who stay in the sport of running are at a high risk of eating disorders and lifelong health repercussions. One study found that nearly half of elite female athletes in so-called "leanness sports" (sports that emphasize thinness, as running does) experience clinical eating disorders.

The same structures that uphold cis male supremacy also bar trans, intersex, and nonbinary athletes from participation and make the sport less accessible to Black and indigenous athletes. Furthermore, this supremacy creates a culture of skepticism around any high-performing athlete who isn't a white, cis man, including the mothers mentioned throughout this article, and runners like Caster Semenya whose gender and eligibility became a matter of public debate simply because of her success. The architecture of the running world was designed for one group of people, and all of us who hold identities outside of "cis and male" are forced to navigate a sports world that pits us against our bodies and sets us up for negative, even career-ending, experiences.

Once we see this we cannot unsee it. Although I am heartened by the visibility and advocacy of mothers who have returned to running and pushed shoe companies to rewrite their maternity policies, it is only a start. Gender-based discrimination touches every dimension of this sport, and we cannot simply edit it out like the clause of a contract. It is tempting to fall for the narrative that shoe companies sell us: that because we see mothers competing on the world stage, we have arrived. But pretending these small steps forward have solved the deep, foundational sources of discrimination and exclusion in running ignores the reality that this discrimination continues to harm athletes of all genders today. We deserve better.