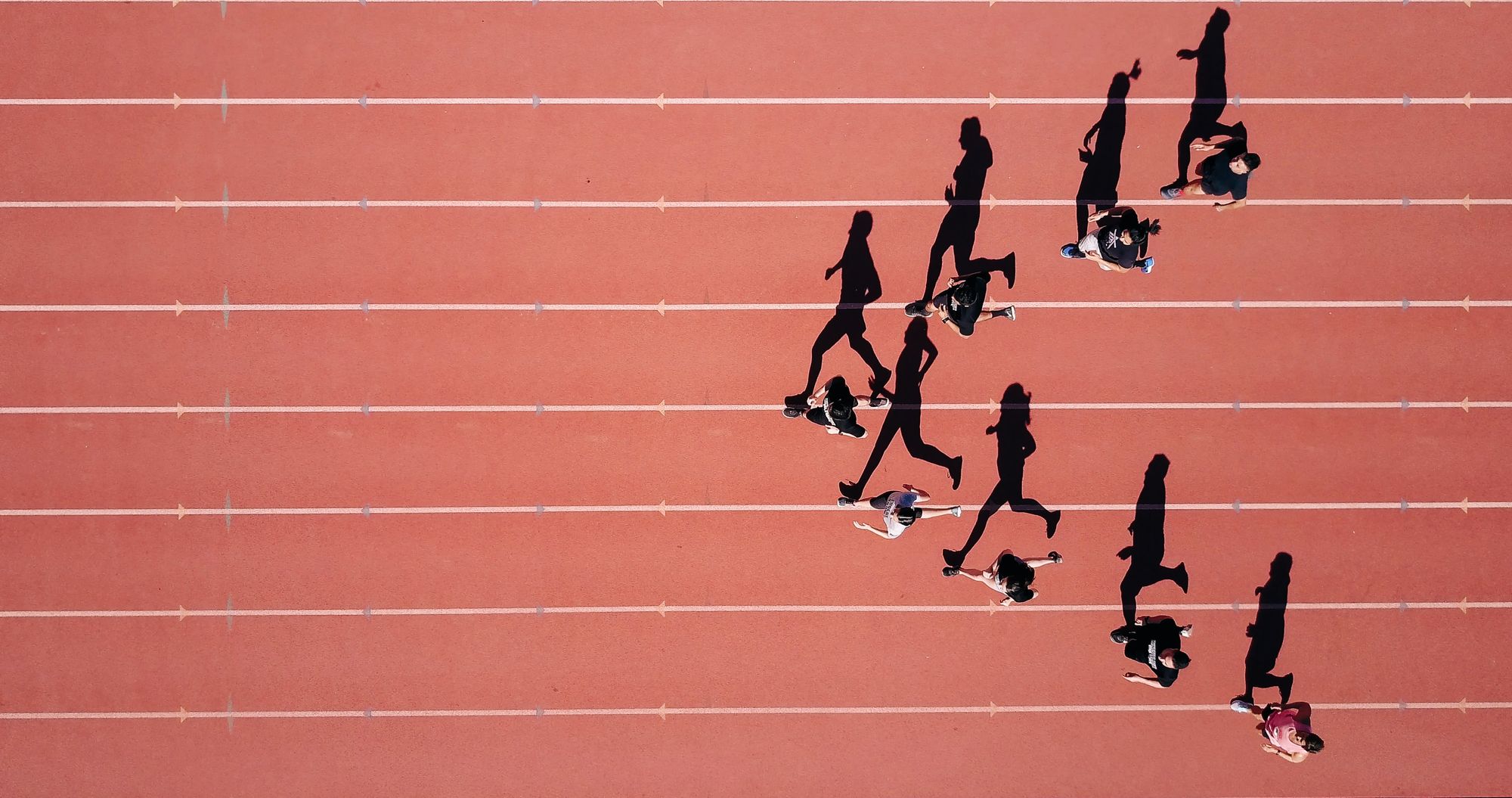 When coach and retired professional runner Lauren Fleshman attended the Olympic Marathon Trials in February of 2016, she hadn't run a step in six months. She was not there to compete in the race, and the first thing people commented on was her appearance. Friends and strangers turned to her and made comments including: "You look fit," "You look like you could race any second," and "Look at your cheekbones – how do you do it?"

On a 2016 episode of Julia Hanlon's podcast Running on Om, a dismayed Fleshman expressed her reaction to these comments: "I'm glad I look like a runner to you right now and that's the first thing you're telling me," she said, going on to describe the harm perpetuated by body-based compliments that tell the recipient "the first thing I notice about you is how you look."

On the podcast, Hanlon, who has been open about her own struggles with an eating disorder, hosted Lauren Fleshman and Dr. Melody Moore, clinical psychologist and founder of the Embody Love movement. The three women spoke at length about eating disorder culture in the sport of running, but in the 90-minute podcast, one phrase stuck out to me: "You look fit."

This phrase is ubiquitous in the running community, and, as Fleshman explained, you hear it from "agents, coaches, [and] people you hardly know." It is baked into running culture and universally accepted as a compliment. But what is particularly insidious about the phrase "You look fit" is that it's a body-based compliment masked as praise for hard work; it makes us think we're being recognized for the effort we've put in, but in actuality, our bodies are being scrutinized for how they compare to an impossible ideal.

I remember hearing those same words before my senior year of college when I was running for a Division I team. I'd put together my best summer of training yet. It was my first time consistently running 60 miles a week (a big mileage goal for me at the time), and I'd been grinding out quality workouts, consistently doing my strength training and rehab, and recovering well with sleep and nutrition.

After the summer, I returned to campus strong, healthy, and fit. But my fitness wasn't due to my appearance. It was due to the ways I'd taken care of myself. It was due to the hundreds of miles I'd logged in my Indiana hometown, preparing my body for what I hoped would be my best year of running yet.

Still, my body was judged by how it looked rather than what I could do in it. The night before classes began, I hooked up with a guy from my team, and afterwards we lounged in bed together. I was naked, drinking a Corona, and he said to me, "You look really fit." I felt myself glowing and shyly responded, "Thank you."

In an intensely vulnerable setting, my entire body exposed, my emotions charged, his comment felt like the highest compliment in the world.

Why did "You look fit" feel like such high praise? Why does that one phrase, uttered nearly four years ago, remain lodged in my brain?

For one thing, it has been drilled into me that fitness is achieved through discipline, giving fitness a moral valence: only people who are willing to sacrifice enough, discipline their bodies, commit to unrelenting hard work for an un-guaranteed outcome long down the road can be "fit." I long thought of fitness as going hand in hand with control, consistency, and self-denial. Pursuing fitness left no room for flexibility or compromise. "Looking fit" meant that my discipline was evident in my body presentation.

But peeling off that superficial layer, fitness is code for thinness. And when fitness is already attached to a judgement of morality, ability, and character, thinness gets rolled into those judgments too. Equating discipline with fitness, and fitness with thinness fuels unhealthy body image, fatphobia, and a culture of disordered eating. "You look fit" tells us that self-denial is discipline, that restriction is admirable, that thinness is something to strive for.

This phrase was particularly powerful because it came from another runner – someone I considered faster and fitter than me. On the podcast, Fleshman remarked that runners can be "highly resistant to advice that feels general," describing a common mentality among competitive runners: "I can only listen to someone that really knows me and my sport at my level and what it takes."

In that moment in my dorm room, I internalized that someone who knew what it took and had been successful in the sport was telling me my body looked like a runner's body. I looked how I was supposed to look.

In reality, fitness looks different for everyone. We can "be fit" and "feel fit" and "build fitness," but we can't "look fit" because fitness isn't a look. Pretending otherwise only reinforces the idea that there is an ideal runner's body. There is not.

Running has been my primary source of community and identity since I first joined my middle school cross country team. While the running world has opened many doors for me, I have felt pressured to make my body mirror what I have been taught a runner's body is supposed to look like.

I relapsed in my eating disorder during the pandemic while running the highest mileage and the hardest workouts of my life. I became fit, but I was also fragile; anorexia controlled my thoughts and jeopardized my mental and physical health. When I ran a shiny new personal record during a time trial on the track, I received praise from my friends and teammates, and my disorder told me that I had to fit into an even tinier shape to elevate my running to the next level. To make the Olympic Track Trials. To be Fast. To be Enough.

A few months later, I traveled to Austin, Texas to compete in a high-caliber track meet that I hoped would move me closer to my goal of qualifying for the Trials. Instead, as I lined up for a 10k under the lights amid a field of talented sub-elite women also vying for PRs and OTQs, I ran one of the worst races of my life. I felt demoralized and embarrassed by how I'd run while my friends, family, and teammates tuned into the broadcast. I felt that I had let everyone, and myself, down.

The next evening, still mulling over the outcome of my race and all that had led up to this perceived failure, I stood on the sidelines of the track and watched the pro runners warm up for their races.

My coach stood next to me and remarked that we were seeing more variation in bodies among the pros than what we'd seen in the sub-elite races of the previous night. There before our eyes, these pros looked human – strong and toned by thousands of miles, but human.

As the elite women assembled at the start line, I observed surprising variation in bodies and builds. They were sinewy yet solid; they had boobs and butts and body fat. The gun went off, and I saw my body in its many incarnations reflected in the women muscling their way around the track: a blur of shapes more varied and diverse than the impossible keyhole-sized shape I strived for.

In the amateur running world, the toxic misconception that eating less equals running fast is pervasive. We exist in a pernicious sports culture that encourages us to slim down to demonstrate our commitment to the sport. We're praised for making every sacrifice to get better, yet we don't have the infrastructure of coaches, dietitians, trainers, and sports psychologists to provide support and help us take care of our bodies the right way. This isn't to say that pro athletes are immune to eating disorders; diet culture has permeated every tier of competitive and recreational running, and pro runners often experience the most intense pressure to make their bodies look a certain way because their jobs are on the line.

Still, the professional women before me demonstrated that what we really need to do to become better runners is strengthen the bodies we have. The runners who have made sustainable, long-term careers in the sport don't play games with their approach to fueling; they have learned to run fast without fighting their bodies; they have learned that discipline does not mean deprivation; they are outspoken about their commitment to healthy bodies. As a runner who values the advice of other runners, I see that mentality as a way to dismantle my eating disorder.

So much of the discourse around running centers on the idea that running will help you achieve a certain physique. Running outlets frequently publish guides to running for weight loss, pandemic weight loss transformations, tales of how eliminating "junk food" and adopting a plant-based diet will turn you into a svelte marathoner, narratives that only perpetuate the idea that we run for the express purpose of achieving an ideal body.

On social media, we're deluged with images of professional runners in peak fitness and body composition, their every muscle flexed in the most athletic way possible, their strides frozen in a flattering up-step. Athletes are often depicted at their thinnest, even though their bodies change dramatically through cycles of training and rest.

Still, we believe what we see and internalize what we read: the sport belongs to the thin.

Diet culture leads us to believe some bodies are more worthy than others and that fitness looks only one very specific way; it's our responsibility to challenge those beliefs and broaden our ideas around running and fitness in general to be inclusive of all types of bodies.

I propose a change in how we frame everything in running culture. Thinness is not the goal. Running is the goal.

In the last several weeks, I've gone for my first runs after finishing eating disorder treatment. My body has changed a lot in the last year, as has my approach to my sport. But our bodies were never meant to be static, and in this moment, I am grateful my body allows me to run.

At times, I still struggle to separate fitness from thinness. In those moments, I remember how those professional women owned the track in Texas: ferocious and alive in their many shapes. I remember so many fat runners who have put in countless miles yet are denied recognition and acceptance in the running community.

We all look like runners because we are runners. We are fit to do anything.

I don't know how fast I can be, but I do know that forcing my body into an arbitrary shape will never get me there. In giving up my "ideal runner's body," I'm allowing myself the chance to reach my potential.