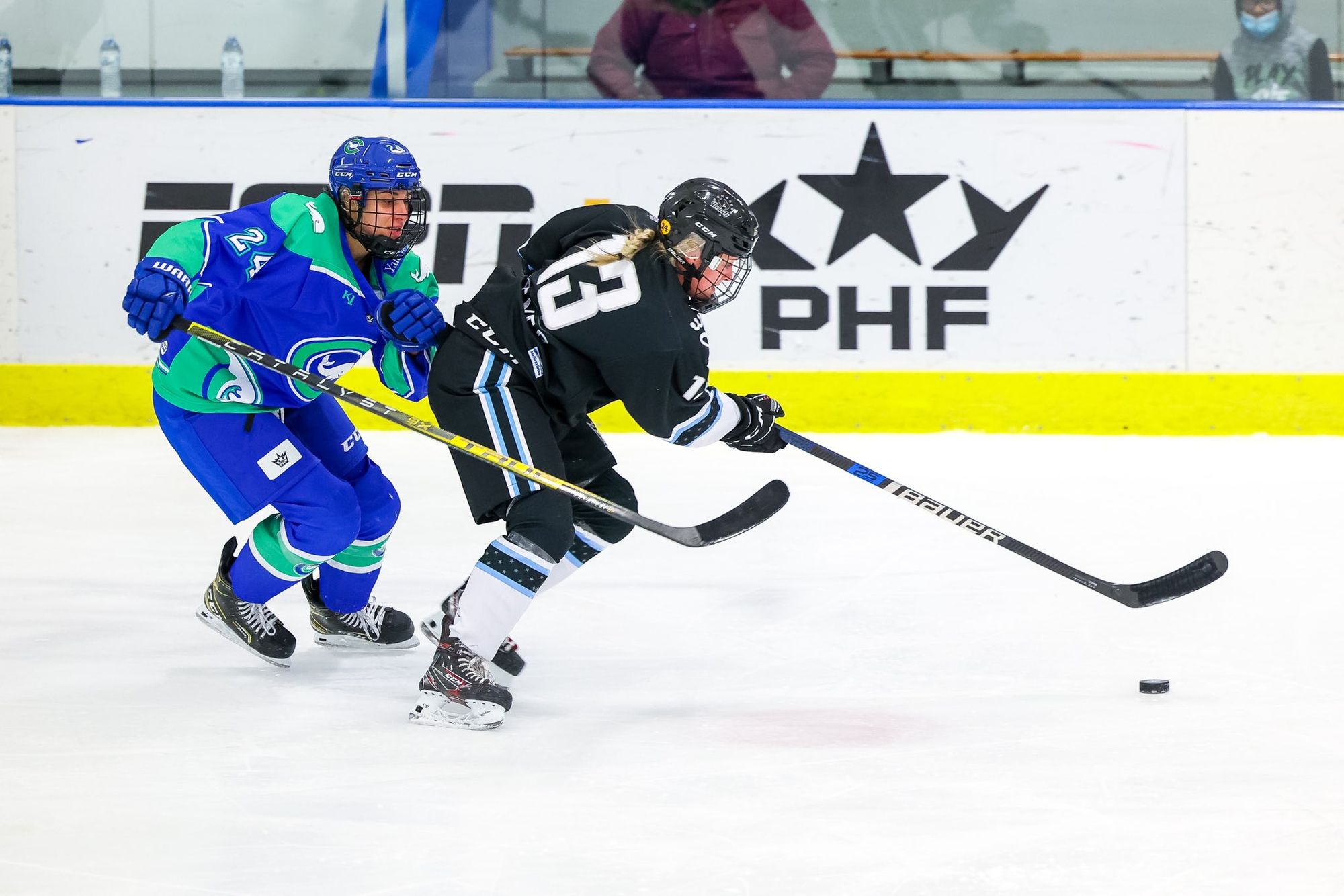 The Six continued their dominance, extending their winning streak to four games with a pair of victories against the Whitecaps in Minnesota. Overall, Toronto outscored Minnesota 6-1 in the two games.

Saturday's game started off quickly, with the Six with a number of good chances early on. Michela Cava opened the scoring just 3:41 in on the power play; amid a crowd in front of the net, Cava was able to get the puck over a diving Amanda Leveille and into the net.

Toronto outworked Minnesota all weekend long, and that's never been more evident than looking at the shots. Per the official scoresheet, the Six outshot the Whitecaps 27-3 in Saturday's opening period. With that said, Minnesota was lucky to escape the frenzy down by just one.

Emma Woods and Mikyla Grant-Mentis combined to double the lead early in the middle frame, again on the power play. MGM and Woods had a back-and-forth before Woods cycled around to the front of the net. A deflection put the puck into the top right corner behind Leveille.

The Whitecaps had a flurry of opportunities in the last five minutes of the second period, including a power play, but couldn't make it happen. Stephanie Anderson appeared to score off a pass from a falling Allie Thunstrom with 2:07 to play, but it was ruled no goal and officials determined the puck never crossed the line.

The Six then continued their streak of scoring early with another goal less than five minutes into the third period, as Tori Charron snagged a long pass from Cristine Chao, deked out Leveille and scored on the backhand.

Minnesota later had another potential goal reviewed, but again, there was nothing there. Taylor Woods added a late goal with just nine seconds left to seal the win.

(A minor note here, but on the ESPN+ broadcast, Toronto's "14-hour bus ride" to Minnesota is mentioned numerous times. Per The Ice Garden's Dan Rice, the Six did not actually drive; they flew.)

Sunday's rematch was all about the opening frame, as all three goals were scored in the first twenty minutes of play en route to Toronto's 2-1 win.

Once again, the Six applied great pressure early, but this time, it was the Whitecaps who found the back of the net first. Audra Morrison took advantage of a Toronto miscue and got away on a break, beating a Six defender and putting it past the glove of Elaine Chuli.

As the midway point of the period approached, captain Shiann Darkangelo tied the game, bouncing the puck off Leveille's goal and behind her into the net.

Grant-Mentis gave Toronto the lead – and eventually, the win – with another incredible goal just over the 10-minute mark. She picked up a loose puck from Lindsay Eastwood and, despite being hooked by two Whitecaps players, managed to get the shot off and score.

Both teams had their chances as the game went on, but ultimately, that first-period offense was all that came about.

After a lengthy break, the Beauts returned to action for a pair of games against the Whale, who continue to surge their way up the standings. Connecticut has now won four in a row following two 3-1 victories over Buffalo.

The teams split their goaltending, with Carly Jackson and Mariah Fujimagari squaring off Saturday and Lovisa Berndtsson and Abbie Ives meeting on Sunday. All four were strong in net over the two games, but the Whale were able to find more gaps to capitalize on and captured both wins.

Amanda Conway opened the scoring Saturday just under seven minutes into the first period, putting it into the top corner of the net over Jackson's left shoulder. That lead held until midway through the game, when Buffalo's Emma Keenan scored her first goal amid a scramble in front.

Buffalo had its chances, including a breakaway from Cassidy Vinkle and a 5-on-3 opportunity in the third period, but Keenan's goal was the only offense they managed on Saturday. The ever-dangerous Kennedy Marchment broke the tie in the final frame, putting the puck in just after the net came off its moorings.

There was no review on the play, but it's clear that the net came off, since Jackson had to actually put it back on before the puck was dropped again at center ice. Per the PHF's new review protocols, only a referee or the video goal judge (offsite) could have initiated a review, but no one did so.

Marchment's goal stood as the game-winning tally, though Emily Fluke added an empty-netter with just over a minute left in regulation.

Sunday's game saw the Beauts run into some penalty troubles, and the team overall couldn't seem to get any momentum going regardless of whether they were short or not. Buffalo had two disadvantages in the first period, and the Whale capitalized on the second to open the scoring.

Janine Weber scored her first goal of the season by taking advantage of an open corner to Berndtsson's right. Catherine Crawley doubled the lead in the second period, which just seemed to further deflate the Beauts, who were only able to put up five shots on goal in each of the first two periods.

To Buffalo's credit, they were able to kill off a few more penalties, including a full two-minute disadvantage to open the third period. Dominique Kremer put her team on the board just 5:03 in, staying on top of a loose puck down low. Just three and a half minutes later, however, Marchment tallied her second of the weekend to regain the two-goal lead for the eventual 3-1 win.

Buffalo was without co-captain Taylor Accursi for both games, who was out with an undisclosed injury. Rebecca Morse swapped out for Taylor Marchin on Sunday.

Jackson and Berndtsson combined for 68 saves over the weekend, while Fujimagari and Ives recorded 43 saves. Sunday's game was Berndtsson's PHF and North American debut; she noted the smaller ice compared to European leagues and how players have less space to work with the puck.

PHF action returns the weekend of January 8-9, with series between the Minnesota Whitecaps & Toronto Six and Buffalo Beauts & Boston Pride.