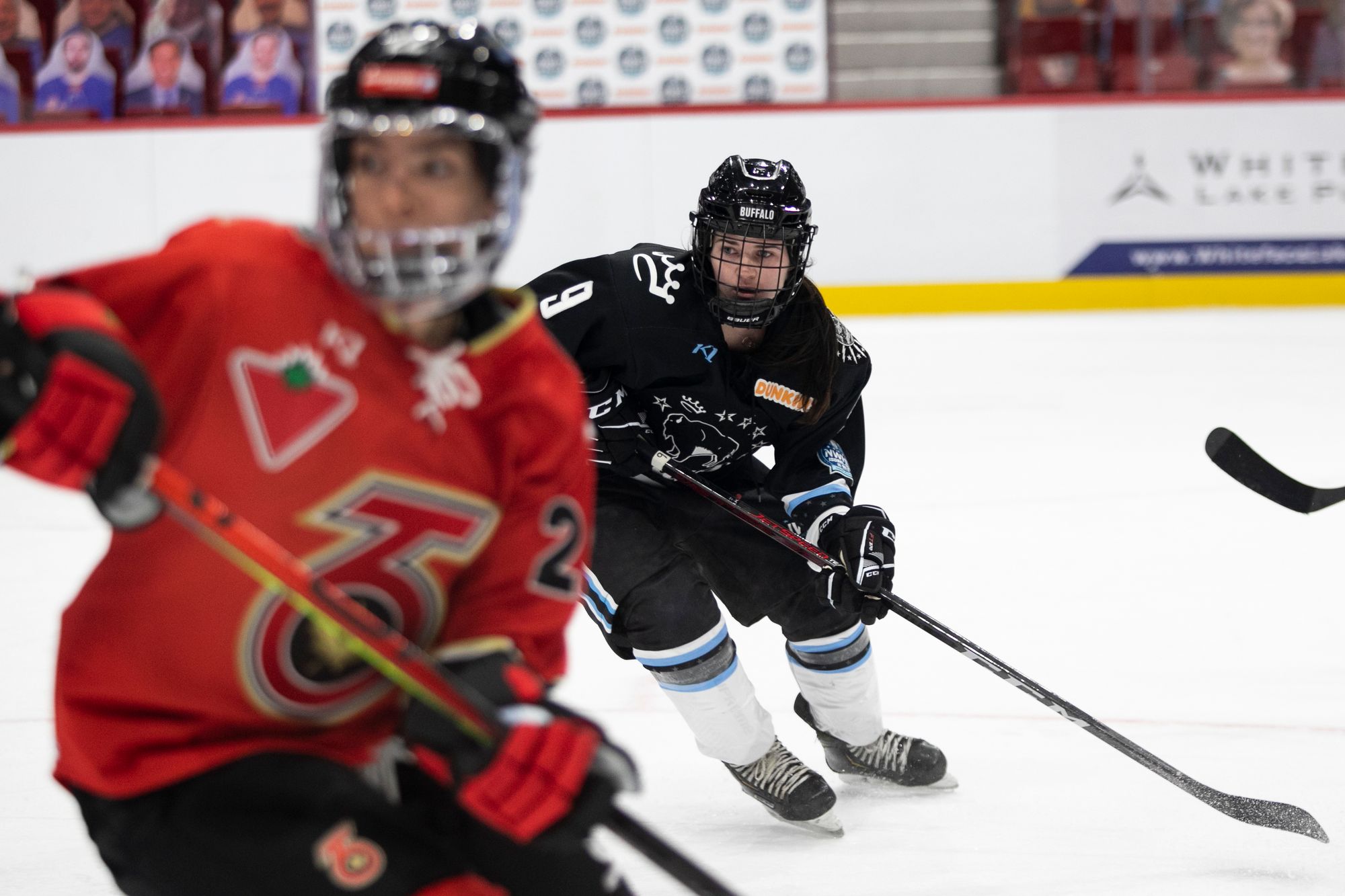 The Connecticut Whale and Toronto Six both notched wins on Wednesday evening, defeating the Boston Pride and Buffalo Beauts, respectively. Not too shabby for a team that was certainly an underdog coming into Lake Placid, and another team that's brand new to the NWHL.

Note: the Beauts were originally scheduled to face the Metropolitan Riveters. The league announced the opponent change mid-afternoon, and said it was made "in line with the NWHL's medical protocols prioritizing the health and safety of all participants during this season in Lake Placid." More information is expected Thursday.

The Connecticut Whale secured their second win of the season with a commanding third period effort against the Boston Pride, en route to a 4-1 victory. The final 17 minutes of the game made a huge difference for the Whale, who were outshot 24-17 in the first two periods and registered just two shots on goal in the middle frame. A four-point performance from Emma Vlasic was critical in the win.

After playing much of the first period without any scoring, McKenna Brand put her team up 1-0 in the final minute on a power-play goal. Brand quickly cut through the middle of the zone and got the puck on her stick, taking a quick shot that found its way behind Connecticut netminder Abbie Ives.

Boston's lead would hold steady through the second period, but everything changed with the start of the third. Less than four minutes in, Tori Howran notched her first career goal.

"I was just drawing the puck to the middle. I saw bodies in front... I was just trying to get my shot past the first layer to get it to the net, and luckily it went in," Howran said of her goal, which was the spark that ignited a four-goal effort from the Whale in a span of under nine minutes.

Katelynn Russ gave Connecticut the lead moments after Howran's goal, scoring from one knee as she fell to the ice in front of the net. Quickly, Alyssa Wohlfeiler doubled the lead with a wrister from the slot, beating the Boston defender.

The Whale then headed to a power play, on which Emma Vlasic capitalized from nearly the same spot as Wohlfeiler, beating a Boston player and the netminder glove side. With a three-goal lead lead, Connecticut held strong for the final minutes to hand Boston their third loss of the season.

"Four games in five nights," said Pride head coach Paul Mara. "We had a late game last night, probably didn't get to bed until 1 in the morning... then to turn around and have a late afternoon game is extremely tough. But no excuses."

"We'll take some positives from what we did tonight and be ready for Saturday," he added.

Connecticut, meanwhile, is understandably happy with how they've performed so far this season. With the firepower of players like Janine Weber and Emma Vlasic, and depth with Alyssa Wohlfeiler, Katelynn Russ and Elena Orlando, it's a visible improvement from seasons past, including last year when the Whale went 2-20-2 or the year prior when their record was 2-12-2.

"Great win, really a character win for our team, the way they battled and stuck with it," said head coach Colton Orr. "It just shows how this group has improved. We're really happy with what we've done so far."

Buffalo Beauts netminder Carly Jackson made 45 saves, but it was the one that got away that gave the Toronto Six their second victory in as many evenings.

Less than five minutes in, Brooke Boquist opened the scoring after breaking past a Buffalo defender, dragging the puck outside the paint and tucking it in behind netminder Carly Jackson from the goal line. The Six relished their lead for about four and a half minutes, but Beauts rookie Autumn MacDougall found her stride and scored twice before the end of the first period.

MacDougall's first goal came on the doorstep as she pounced on the puck following a spin from Lenka Čurmová in front. She scored again with just eight seconds to play in the period on a 2-on-1 opportunity to give Buffalo its first lead of the young season.

Toronto's Taylor Woods Woods tied the game with 5:55 to play in the second period. Mikyla Grant-Mentis took an initial shot; Jackson made the save with her chest, but the rebound dropped to the ice and right onto the stick of a waiting Woods on her side. Despite being partly tied up by Dominique Kremer, Woods was able to get just enough of the puck to direct it in.

Megan Quinn regained the Six's lead in the final minute of the second period, beating Jackson up high on her far side with what looked like a harmless attempt to just get the puck on net.

Elaine Chuli didn't see quite as much pressure throughout the sixty minutes, but she did face a flurry of shots in the final minutes of the game as Quinn's goal held up as the game-winning tally. Emily Fluke also added an empty-net goal to seal the 4-2 win.

The Six won both games in an unexpected back-to-back set, looked sharp and are setting themselves up for success in the later stages of the season in Lake Placid.

Head coach Digit Murphy called it "physically and emotionally tiring" playing four games in five days, but emphasized the flexibility of her team in adapting from an expected day off to the sudden change in plans.

"Flex and flow, be ready for everything. We prepared for this. It's COVID, right? It's hard, but I'm so glad we won," Murphy said.

Note: This schedule may change, depending on updates regarding the Riveters' COVID-19 situation or other issues affecting player availability. As of Wednesday evening, the schedule is: