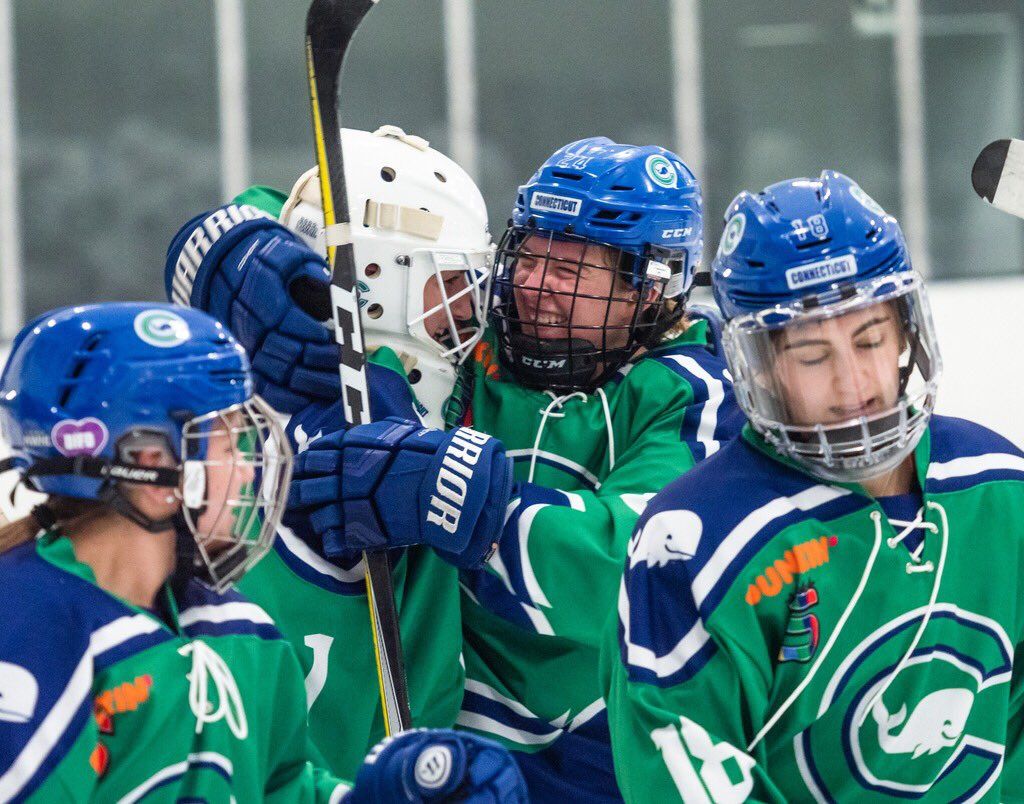 The NWHL's Connecticut Whale captured their first win in over a calendar year, while the Boston Pride maintained their undefeated record in league action this past weekend. The Minnesota Whitecaps also grabbed two wins over the struggling Buffalo Beauts.

In general, the Beauts didn't play badly over the weekend, but their continued streak of falling apart once they've given up a few goals really bit them. Minnesota won 8-1 on Saturday and 7-2 on Sunday. The Beauts, meanwhile, haven't won since November 30.

Saturday's game started off all right for Buffalo. Minnesota struck first, as Audra Richards slammed home a cross-ice pass from Stephanie Anderson to make it 1-0. Corinne Buie tied the game on a one-timer from the right circle, but less than a minute later, Allie Thunstrom regained the Whitecaps lead on an outlet pass. Richards then scored her second of the night, deflecting the puck off goaltender Mariah Fujimagari.

For at least a little while, Buffalo was still able to keep the game close. Becki Bowering scored her first NWHL goal, capitalizing on a big rebound in front of the net shortly after a Beauts power play ended.

Minnesota dominated in the final frame, as they scored five goals in the last 10 minutes of play. Thirteen of the 16 Whitecaps skater registered at least a point in the win, led by Richards (2 goals, 1 assist), Nicole Schammel (1 goal, 2 assists) and Thunstrom (2 goals). Amanda Leveille stopped 27 shots, while her counterpart, Fujimagari, had 33 saves.

The teams met less than 24 hours later, and this time, it was a weak second period effort that did Buffalo in. Minnesota scored four goals in the middle frame en route to the 7-1 win.

Jonna Curtiss scored twice for the Whitecaps; Sydney Baldwin, Meghan Lorence, Meaghan Pezon, Richards and Schammel also tallied goals. In a display of just how rough a start it was for Buffalo, the Whitecaps were up by a pair of goals before Buffalo had even recorded a shot.

The only positive that the Beauts can take away: Ashley Birdsall's first NWHL goal, scored on the rebound following a shot from the point. Overall, however, it was a rough go: despite outshooting Minnesota 18-6 in the second period, the Beauts allowed four goals in that same timeframe.

The Whitecaps are holding steady at second place, while the Beauts are going to be stuck in fourth place for at least a while – they don't play for a month now.

Buffalo did have one addition to its roster for this past weekend's games: former Beaut Sarah Casorso signed a PTO and played in both games. Her status going forward is uncertain at this point.

It took what feels like forever, but the Whale finally found themselves on the winning side of a game this past Saturday. The 4-3 overtime victory was Connecticut's first win since December 2, 2018.

The Whale had a couple good chances early on, including a lengthy 5-on-3 in the opening half of the first period. They were unable to capitalize, however, and gave up a goal to the ever-dangerous Kendall Cornine, who scored top-shelf on the power play.

Sarah Schwenzfeier scored the tying goal for Connecticut early in the second period. Schwenzfeier picked up a pass from Kaycie Anderson out in front, and snapped it home with a quick release.

Late in the period, the Whale took the lead. Kendra Broad scored her first goal of the weekend off a patient feed from Brinna Dochniak. Broad was wide open in the middle of the ice for the shot.

Connecticut held to its lead until more than midway through the third period. That's when things really got interesting. First, Cornine tied it for the Riveters, pouncing on a rebound in front of the net. Then, with under two minutes to play, the Whale were unable to control a rebound, and with the goaltender out of position, Brooke Avery gave Metro the lead.

Connecticut, to their credit, didn't give up. Just 40 seconds after Avery's goal, Hanna Beattie took advantage of a scramble in front of the net to score 6-on-5 and tie the game. Sam Walther was able to make the initial stop, but Beattie snatched up the rebound and sent the game to overtime.

Broad scored her second of the game in overtime on a sharp-angle shot that caught the goalie in an awkward position, giving the Whale the extra point and an undoubtedly huge win.

Riding the high of their victory the day prior, the Whale then faced a tough Pride squad on Sunday. The energy worked in their favor early on, as Elena Gualtieri scored just 1:37 in following several good chances.

From there, however, it was Boston's game. Jordan Juron scored off a pass from her teammate to the left of the goaltender, following solid pressure from the Pride. It's Juron's first goal with the Pride; she signed a contract with the team last week after spending two games on a PTO with them.

Lexie Laing added a goal on a breakaway late in the first period to give Boston its first lead of the game. Kaleigh Fratkin scored late in the second before captain Jillian Dempsey made it a 4-1 game just 11 seconds into the third period.

Emma Vlasic notched a goal for the Whale in the third period, but it was too little, too late. Overall, the Pride outshot the Whale by a commanding 57-29 margin. Sonjia Shelly made 53 saves in 59 minutes of action.

The Whale also had a new addition to their roster on Sunday, as former NWHLer Janine Weber returned to the league via a PTO. She previously played with both the Pride and Riveters. It's uncertain if she'll play in additional games for the Whale at this point.

Note: each NWHL team is alloted 10 PTO slots to use over the course of the season. If a player appears in three games on a PTO, that uses three of the team's 10 slots. (This information came via Anya Packer of the NWHLPA on the Whale/Riveters broadcast Saturday.)

Rosters have been announced for the NWHL's All-Star Weekend, being held on February 8-9 in Boston, MA. The skills competition (Saturday) and game (Sunday) will be held at Warrior Ice Arena.

Players will receive monetary bonuses for appearing in the NWHL All-Star Weekend. If their team wins, those bonuses are doubled. Specific terms are not disclosed (like with salaries, it is up to individual players if they wish to disclose this information), but it is confirmed that the bonuses are financial in nature and are not dependent on any business metrics, such as ticket or merchandise sales.

Here are the players scheduled to attend (subject to change):

There are three games this coming weekend in NWHL action. The Whale and Whitecaps face off twice, with games on Saturday at 2:00 PM Eastern/1:00PM Central and Sunday at 4:00PM Eastern/3:00 PM Central, both in Minnesota. On Monday, the Martin Luther King Day holiday, the Riveters and Pride square off at 1:30 PM Eastern in Boston.