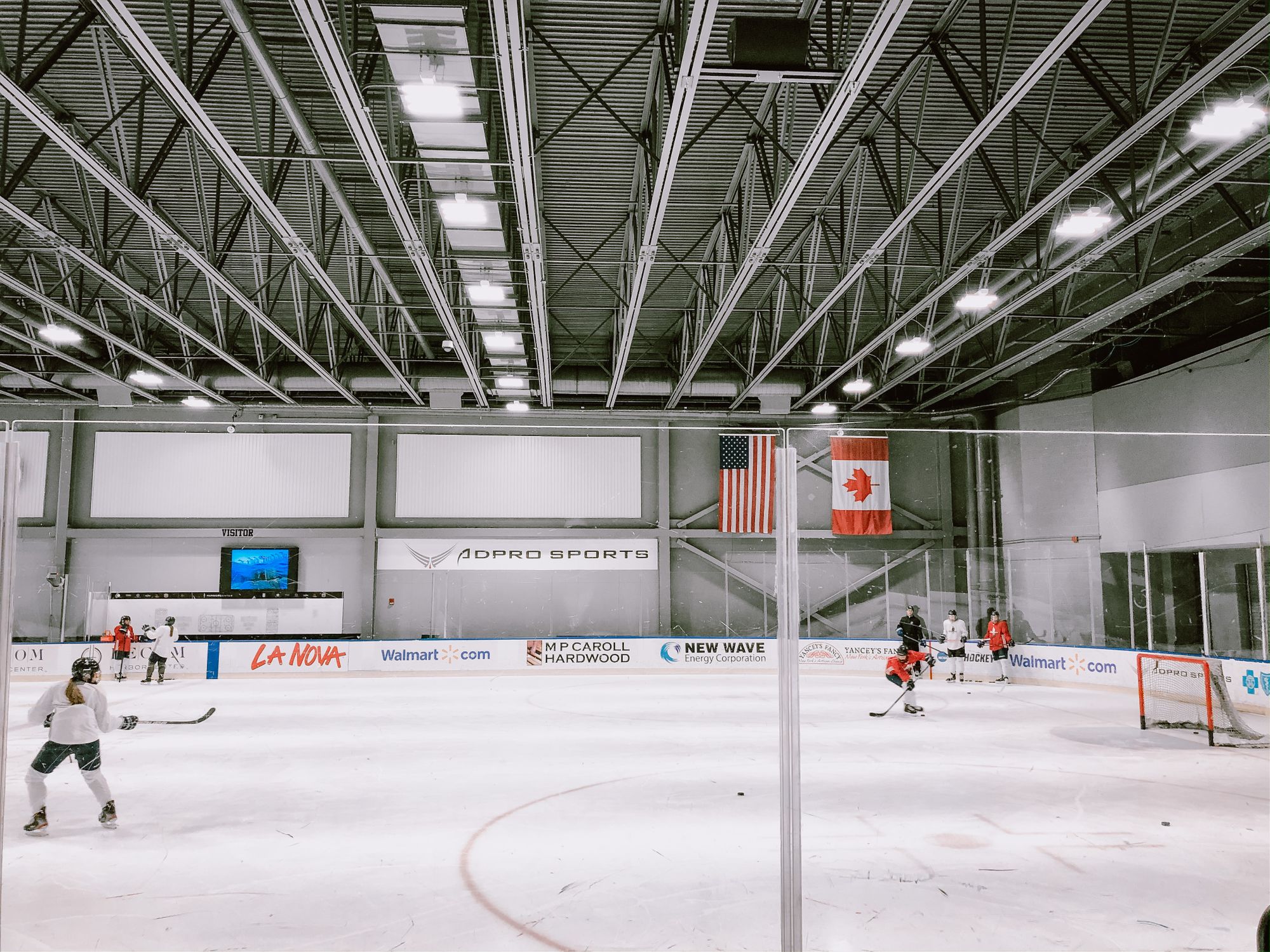 Before the sunrise fully peaks to reflect on nearby Lake Erie, a group of six Western New York area women's hockey players lace up their skates and hit the ice at LECOM Harborcenter. Nets are in place, buckets of pucks spill onto the ice, and the Buffalo region PWHPA players are back to doing what they love and are passionate about: playing hockey.

Although the Buffalo region of the PWHPA is relatively small compared to some of the other regions, with only six regular session attendees, it's clear from watching the players on the ice that they believe in what they're doing: working for the betterment of women's hockey, and fighting for the professional environment they believe they deserve.

On this Thursday morning that I attended their on-ice session, the group is working on their passing skills, shooting and stickhandling. It's 7:30 AM – a lot of people have barely gotten out of bed yet – and they're already on the ice, getting in a full skate before they head off to their respective day jobs.

It's all worth it.

"We all have the same goal, to grow the game and get the game of women's hockey to where we want it to be," said Jacquie Greco, one of the Buffalo-area PWHPA members who previously played three seasons with the NWHL's Buffalo Beauts. "We know right now, it's not where we want it to be, but we're getting it there. Every day, every practice, every showcase, we're getting it closer and closer."

Greco and her fellow skaters – Hayley Scamurra, Annika Zalewski, Olivia Zafuto, Savannah Harmon, and Emily Janiga – are all part of the PWHPA's contingent that signed on in 2019, agreeing to forgo playing in a North American professional women's hockey league until there are better conditions in place.

So where exactly do they want women's hockey to be?

"We need support to get us to be seen where we need to be seen," Greco said. "We don't have any broadcast deals. We need to be more visible, we need to be out there. The support from our sponsors has been so amazing, and it's been getting us to this point, but I think we need more support to be able to go to different cities."

"Being in hockey markets, being everywhere we could possibly to showcase the best female hockey players that there are," she added. "I think we're getting to that point, and I think you can see from the sponsors that we do have a lot of people who are willing to support us. I think it's just going to keep growing from there."

Zafuto, having joined the PWHPA out of college, has a different perspective.

"It's just the little things, little details that are taken for granted," she said. "Yeah, getting paid is nice, but having tape, ice time, travel, traveling together, living places together, being a team, having people at practice. Such little things that you might not think of... it's just a matter of being treated professionally."

"I've heard stories, mostly horror stories," Zafuto added. "It sounded like college hockey was almost more professional than the professional league. In college, you get your meals, travel, you're traveling with the team, you're practicing and working out every day."

How did we get to this point?

Five of the six skaters regularly representing the Buffalo-region PWHPA played for the Beauts last season, as part of arguably the most professionally-treated team in the NWHL during their tenure under the Pegulas.

"I think that was huge," Scamurra said. "I think every team deserves that sort of professional treatment, and everyone wanted to be similar to us. I think that was a huge point for me [in deciding to join the PWHPA]."

For Zafuto, the path to the PWHPA was a little different.

"I was still in college at Colgate at the time," she said. "I got a call from Hayley Scamurra. There were some rumors going around that this was happening. Myself, Jessie Eldrige, and Bailey Larson were three girls that had been drafted and who were hoping to play the next year."

"There was no doubt in our minds, there was no hesitation. We're just like, yeah, this is something we have to do."

"We sat down together, and we were talking to Scams [Scamurra] and she told us what was happening," Zafuto said. "There was no doubt in our minds, there was no hesitation. We're just like, yeah, this is something we have to do."

"We heard the mission, that they want to grow the game, and that's... that's why we play hockey," she added.

As word about the PWHPA spread among players in Western New York, the details began to fall into place. The association's regional representatives reached out to Harborcenter about securing ice time and were successful. The Academy of Hockey, the facility's in-house hockey training organization, also agreed to join on. Ice time and training/coaching are paid for through player dues to the PWHPA, which are allotted to each region.

Each day is different depending on which coach they're working with, but Greco said much of what they do is skill work, since they don't have a goaltender. Shannon Szabados is listed on the PWHPA's website as being in the Buffalo region, but lives in Ohio and does not make regular ice time.

(Note: There are other players listed as "Buffalo region" on the PWHPA site, but they, like Szabados, do not regularly skate with the group, but it was considered easiest to list them in that region. Blake Bolden, for instance, lives in California. Maddie Elia is focusing on her non-hockey career, and Emily Matheson lives in Florida.)

Why is now the right time for this movement?

"The sooner the better, right?" said Greco. "Coming off the 2018 Olympics, there was a ton of momentum for women's hockey, as everybody could see. We had professional hockey in two leagues the year after, and everything was going great."

"Then things kind of fizzled away, and we lost one of the leagues. I think everyone re-grouped and refocused on what we're actually doing, and what we're trying to do," she added. "I don't think two leagues was the right thing at the time, so getting to one league, and getting to where we want to be, is obviously our end goal."

"With the growth of women's sports right now, it just makes sense," Zafuto said. "With the way things were going and the paths different people were taking, or different leagues were taking, it just kind of made sense. Let's do it now, with the CW folding, and it's kind of like, okay, this is our chance. This is the best shot we're every going to get to really grow the game."

"Also, you look at other sports," Zafuto said. "You saw what the U.S. women's soccer team was doing, you see the WNBA, there's no question. That's what we want, and now is the best time."

Both Scamurra and Greco also referred to the U.S. women's soccer team's movement as a key part of their alignment and goals with the PWHPA.

On the PWHPA's progress thus far

All three players that I spoke with have appeared in at least one game for the PWHPA to date, and are slated to play on Team Kessel in this weekend's Secret Women's Hockey Showcase on the Dream Gap Tour. So far, they say, their experience has been great.

Zafuto flew to San Jose last year to participate in a game against the San Jose Sharks alumni and also played in the showcase in Boston, experiences that were not only humbling and emotional, but eye-opening.

"It was an experience that I've never had," she said. "They [the Sharks] flew us down there. Everything's paid for, but also just the way we were treated. The fans were lining up, there were so many people that came up to us and were like, 'thank you for doing this.' "

"[In New Hampshire] the Flanagans put on an unbelieveable showcase," Zafuto said. "When you're there, it's almost emotional. We were going to our showcase, we're sitting on the plane, we're like 'We're lucky, we're getting flown here to do this,' and it just kind of hits you."

"You're standing there, listening to the anthems, and there's little girls everywhere and you're like, wow, this could be something really big and really special," she added. "It's humbling to see people coming to root for you guys, and root for what we're doing."

Of course, it's not just about what's happening off the ice, either.

"Obviously, there are a lot of great players in the showcases and in the PWHPA in general," Scamurra said. "It's extremely strong competition. They're super fast-paced, highly-skilled games. It's been a lot of fun."

"We're also going to areas where women's hockey isn't normally being played at that level," she added. "I think it's really good exposure for us."

Greco, Scamurra, and Zafuto know that the path toward ideal conditions in professional women's hockey won't always be an easy one – and it likely won't be a quick one, either.

"We knew it wasn't going to be a full season like we've had in the past or like we had in college, but it's definitely a growing process," she added. "I'm one of those people that really want the game to be where it should be, and where professional female athletes should be, especially in the sport that I grew up and love."

Scamurra said she hopes that the PWHPA continues to expand, including adding more showcases, with more teams, as time goes on.

For fans in Buffalo, there are no games or showcases in the area planned at this point, partly due to the fact that it is a small contingent of players, so it makes more sense for them to travel elsewhere.  However, it's not out of the question in the future.

"We would love that," Scamurra said of the possibility. "Especially at Harborcenter, I think it's the perfect venue. We could really feel the crowd here."

In the meantime, this group of six will continue to skate together a few times a week, working on their skills, and traveling to places like Toronto, Chicago and New Jersey as time permits to play showcases and one-off games with and against other PWHPA members, amid their off-ice careers, family life, and everything else.

Again, they stress: it's worth it.

"Everything we're doing thus far is getting us to where we want to be," Greco said. "It's going to take months and time and years. But every showcase is getting better, every practice is getting better. We're getting more fans every single day. If in September, we're in the same state, I think it's just going to be better and bigger."

"Do I want a new league in the next year? Yes," she said. "Is that possible? We don't know, but we're working toward that every single day, we're on the right track and what we want is going to eventually happen."