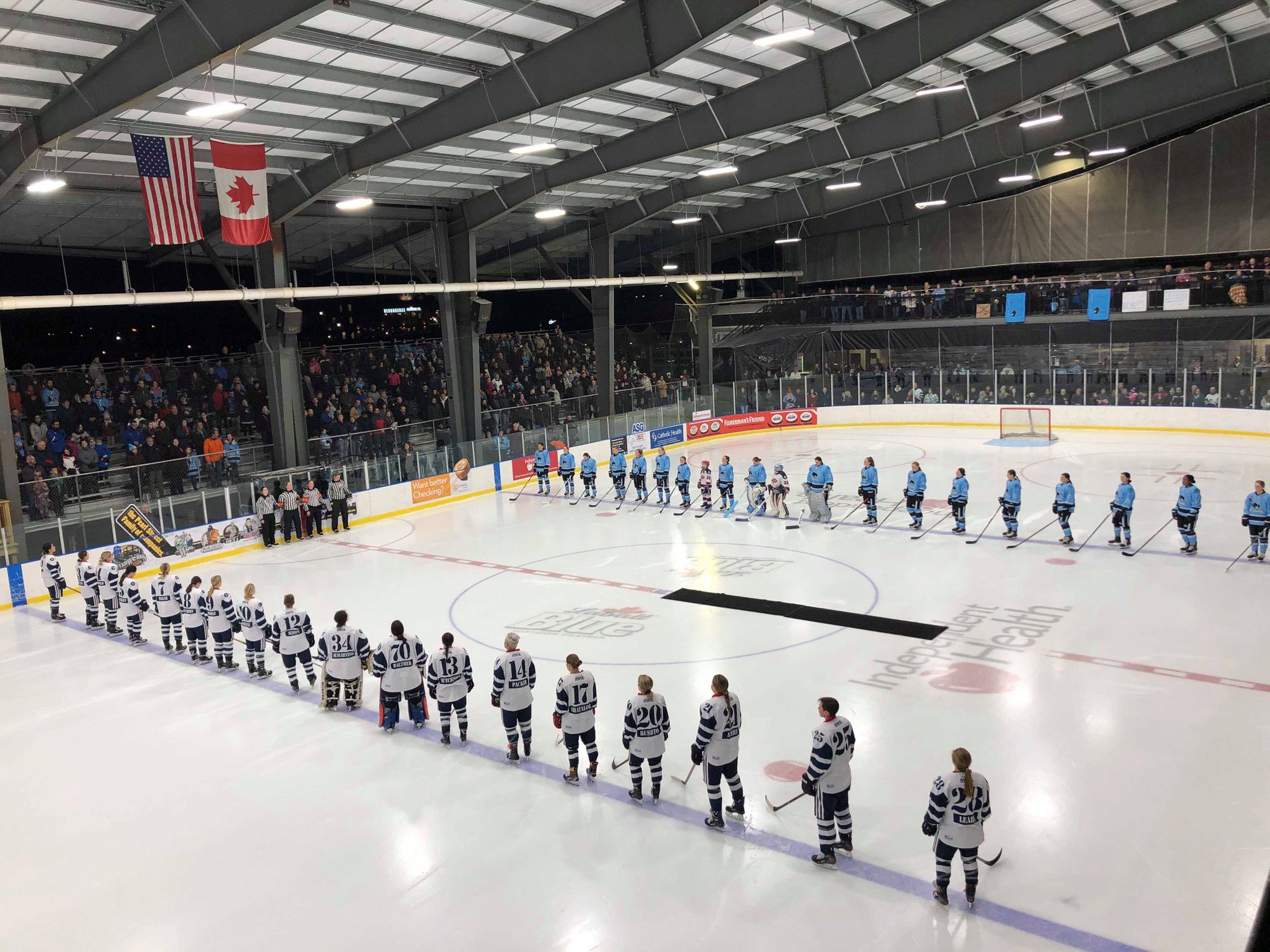 The NWHL's Metropolitan Riveters pulled within a point of the third-place Buffalo Beauts thanks to a pair of victories over that same team this past weekend. Elsewhere, the Boston Pride are now 15-0 on the season after two wins over the Connecticut Whale, although the Whale were able to keep Saturday's game close.

Taylor Accursi scored four goals in the final 10:49 of play on Saturday night for the Beauts, but Buffalo was unable to hang on and fell by a score of 7-4 in the first outdoor regular-season game in NWHL history.

The Beauts started off the game well, as both teams adjusted to the outdoor elements at Buffalo RiverWorks. The atmosphere – which included a sell-out crowd of about 1200 fans, and a backdrop of the Buffalo River and General Mills plant – certainly provided a unique experience for not just fans, but players as well.

"It's just fun, any time you're playing outside," Madison Packer said. "It reminds you of when you're a little kid, and why you started playing in the first place. It was fun, a different atmosphere, but most of us grew up [with] late nights, long hours out on cold rinks like that. It was just a really fun, back-to-your-roots game to play."

Former Riveters captain Ashley Johnston made her return to the NWHL this weekend, signing a PTO with the team for the two games only.

Johnston's return had been in discussion for some time, but the timing just wasn't quite working out until she was given the chance to hit the ice on Saturday, with several other Riveters D unable to make the trip. She hasn't played defense since the Riveters' championship game, and has only played forward in some men's league games since. Undoubtedly, her return brought a spark to the Riveters team.

Just over three minutes in, Rebecca Morse scored from the point on the first real shot of the game. The Riveters applied pressure and cycled the puck through the zone, and Morse ended up with the puck at the blue line. An innocent-looking shot found its way through and into the net, over the glove of Mariah Fujimagari.

As the Beauts battled to find the tying goal, it was the Riveters who would take a 2-0 lead late in the first period. With Becki Bowering in the box for Buffalo, Brooke Baker scored on the advantage, deflecting a low shot from Mallory Rushton in front of the net over Fujimagari's shoulder.

Packer scored just 2:17 into the second period to give the Riveters a three-goal lead, knocking in a rebound off a shot from Cailey Hutchison. Hutchison's shot hit Fujimagari's pad and came out, with Packer waiting on the right side of the goaltender.

The Riveters were dominant through the opening forty minutes of play, outshooting the Beauts 26-13 and continuing that stretch early in the third. The offensive side of the game exploded in the third period, with the two teams combining for eight goals in the final period.

Buffalo's luck finally turned around when Accursi scored her first of the night 9:11 into the final frame. Accursi nearly scored earlier in the period on a play that somehow managed to stay out of the net, but she finally found the back of the net after chipping in a mishandled puck that came loose in front.

"We took our foot off the gas," Packer said. "We got comfortable, and we can't do that. We're shooting ourself in the foot. We had that game under control for a little while, and then we let them creep back in, and the tables were totally tilted and we were kind of on our heels."

Just 32 seconds later, Brooke Avery regained the three-goal lead for the Riveters, squeezing the puck in on Fujimagari's short side. Accursi would score the next three goals in a span of just 2:20 to eventually tie the game for Buffalo.

"I think we got our heads out of our butts," Accursi said. "I think everybody just brought that extra little step in, and that's what we needed."

Unfortunately for the Beauts, it didn't do them much good. Just seconds after Accursi's fourth goal, Tatiana Shatalova regained the Riveters' lead. Packer then added her second of the night on a beautiful shot to make it a 6-4 game; Hutchison scored late in the game on the empty net for her first career NWHL goal.

Sam Walther made 22 saves in the 7-4 victory for the Riveters, while Fujimagari stopped 28 of 34 shots faced.

"It was a lot of fun," Accursi said. "I wish we would've got the win out of it, but it was a good fight toward the end."

The teams met again less than 24 hours later, this time indoors at Buffalo's regular home rink, Northtown Center at Amherst. The results, however, were much the same, as the Riveters nabbed a 6-3 win to sweep the weekend.

Packer once again scored twice, including opening the scoring on the power play less than five minutes in. Her first goal came on a shot from the half-wall to Kelsey Neumann's right side, putting her team up 1-0 early in the game.

Brooke Stacey tied the game later in the first period with her first of two goals on the afternoon. Accursi and Stacey broke through the neutral zone, and Accursi managed to execute a backhand pass to a waiting Stacey on the other side of the ice, giving her a bit of a breakaway chance.

The teams headed into the first intermission tied, but Packer quickly changed that with another power play goal. She picked up the puck on a long pass, carried it into the zone and behind the net and managed to tuck it in on the wraparound.

Less than two minutes later, Hutchison deflected a pass by Shatalova to double her team's lead. That would be the Riveters' third power-play goal of the afternoon, one point that the Beauts will certainly look to work on going forward.

Stacey lessened the gap with her second of the game just over two minutes later. Erin Gehen sent a pass across the ice between the faceoff circles to Stacey, who slammed it home on the 3-on-1 opportunity. With that, the hopes of a comeback stayed alive as the teams played the remainder of the second period and headed into the intermission.

The Riveters, however, would score three goals in the third period to seal the victory, despite Accursi notching her fifth goal of the weekend. Nicole Arnold, Kendall Cornine and Kate Leary all scored for Metro, with Packer assisting on the latter pair of goals.

Shatalova and Buffalo's Nikki Kirchberger were both tossed from the game with 5:08 to play in regulation after a scrum in front of Buffalo netminder Kelsey Neumann. Both also received fighting majors on the play.

Walther made 17 saves in Sunday's win, while Neumann had 28 saves.

The Whale were so close to their first victory of the season, but they were unable to squash the Pride, who swept the weekend series and are now 15-0 on the season.

On Saturday, an incredible 56-save performance from Whale netminder Brooke Wolejko kept Connecticut in the game through the first 65 minutes, but the Pride were able to capture the extra point in a shootout.

To no surprise, McKenna Brand opened the scoring for Boston Saturday. An icing call sent the faceoff into the offensive zone to the left of Wolejko; captain Jillian Dempsey scrambled for the puck, then made a quick pass to a speeding Brand on the other side of the ice.

Despite going down just about five minutes in and being horribly outshot by the best team in the league, the Whale did a good job of staying alive as the game went on. Connecticut finally found the tying goal midway through the third period, when Hanna Beattie scored her first goal of the season.

Shortly after a power play expired, Shannon Doyle sent a pass up the ice to Jane Morrisette along the boards. Morrisette took the shot, which was poked out by Lovisa Selander. The puck found its way to Beattie's stick in front, and she was able to knock it through.

The teams eventually found their way to overtime, then a shootout. Tori Sullivan scored the lone goal in the shootout to give the Pride the win:

When the teams rematched on Sunday, the Pride made sure it wasn't nearly as close of a game. A pair of goals in each of the first two periods, followed by a three-goal third period effort, led Boston to a 7-2 win.

Just 1:36 into the game, Lexie Laing put the Pride on the board on a backhand tip that sent the puck high into the net from the top of the crease. Emily Fluke doubled their lead on a deflection in the midst of a 2-on-1 with Taylor Wasylk later in the opening frame.

After Brand made it 3-0 just 16 seconds into the second period, Laing scored her second of the game midway through the game with a shorthanded tally. Laing was able to get the puck and speed off on a breakaway, putting the puck in through the five-hole on the opportunity.

Beattie would finally get the Whale on the board late in the second period, but it wasn't enough to allow Connecticut to get back into the game. Dempsey regained the Pride's four-goal lead in the opening minutes of the third period, scoring on a third effort to capitalize on a rebound that came out in front of the netminder.

Sarah Schwenzfeier got one back for the Whale, but Sullivan scored a highlight-reel goal with under four minutes to play (and with the Pride on the advantage) to further solidify the win. Fluke added a goal with 1:02 to play in the 7-2 victory.

Wolejko followed up her strong performance on Saturday with a 47-save performance on Sunday. On the Boston side, Victoria Hanson made 28 saves Sunday, while Lovisa Selander had 23 saves Saturday.