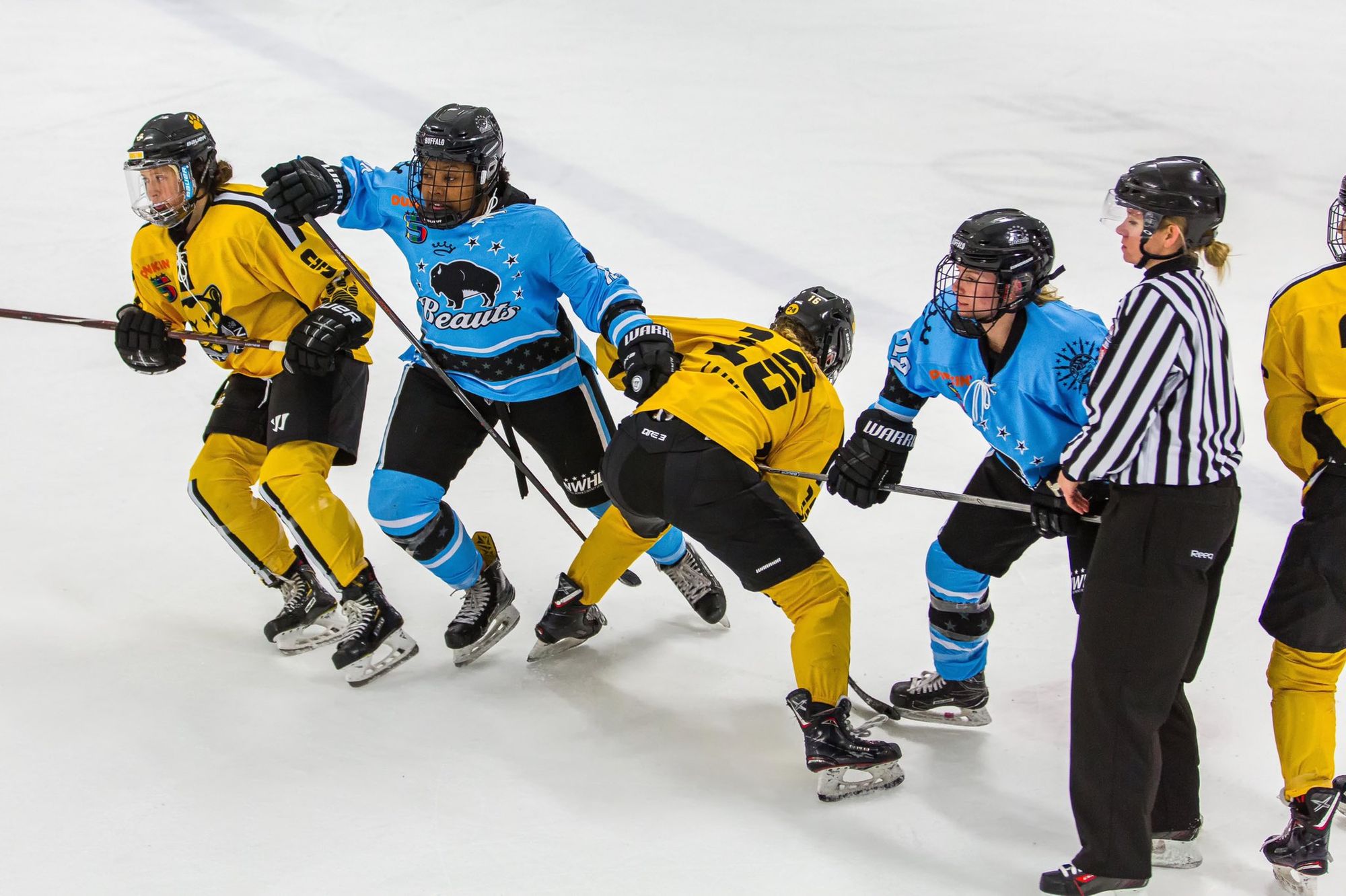 The Boston Pride extended their unbeaten streak this past weekend with a pair of wins over the Buffalo Beauts, while the Connecticut Whale remain winless after dropping two games to the Minnesota Whitecaps. The Metropolitan Riveters were inactive in NWHL action this past weekend.

The Pride left Buffalo with a pair of wins after this past weekend, but Saturday's game was arguably the closest a team has come to beating Boston this season. Although the Beauts lost in overtime, they became the first team to earn a point from the Pride this season, and also managed to shut down league-leading scorer McKenna Brand, who had an 11-game point streak going.

On Saturday, the Beauts had two goals disallowed, faced a slew of penalties and dropped a two-goal lead, but still managed to get the game to overtime, where the Pride won 4-3.

After an early goal by Buffalo was disallowed due to player contact in the crease, the Pride went up 1-0 midway through the first period. Lexie Laing scored for Boston, but their lead lasted only about 25 seconds before Marie-Jo Pelletier tied things up quickly for the Beauts.

The Beauts stayed with the Pride as the game went on, battling hard and killing off several penalties, including a brief 3-on-5 disadvantage. Taylor Accursi gave Buffalo their first lead of the evening, scoring her 10th goal of the season and 20th of her NWHL career halfway through the game.

Buffalo jumped to a two-goal lead later in the period, capitalizing on a two-player advantage. With Kaleigh Fratkin and Lexi Bender both in the box, Sara Bustad scored to increase the Beauts' lead. The Pride got one back just moments later, as Tori Sullivan scored an even-strength goal, with each team with a player in the penalty boxes. Boston outshot Buffalo by a 30-15 margin in the opening forty minutes.

Near the midway point of the third period, the Pride tied the game. They managed to get goaltender Kelsey Neumann, who had been keeping Buffalo in the game at that point, just out of position enough, and Mary Parker was able to tip the puck into the net.

The Beauts were unable to capitalize on a power play several minutes later, including having another goal disallowed due to a crease violation. Buffalo also had a late advantage, but the teams went to overtime locked at three. More than halfway through the overtime period, Jenna Rheault scored her first goal of the season to give the Pride the extra point.  Neumann made 40 saves, while Lovisa Selander stopped 20 shots faced.

Brooke Stacey was held out of Saturday's game due to injury, but she returned for Sunday's afternoon contest. Unfortunately for Buffalo, her return didn't spark much of anything, as the Beauts looked flat and uninspired in Sunday's 4-2 loss to the Pride, certainly a different game than Saturday's closely-contested match.

Buffalo debuted Tiffany Hsu in net, a gutsy move against an offensive powerhouse like the Pride. Hsu's teammates didn't do her many favors, particularly early on, as they failed to provide much support and allowed Boston lots of zone time and several big chances.

Captain Jillian Dempsey put the Pride on the board just 7:26 in, and from there, it was really Boston's game to lose. Less than three minutes later, Christina Putigna put a shot on net up high, which went over Hsu's shoulder and into the net. More than halfway through the opening frame, the Pride had as many goals (2) as the Beauts had shots.

Buffalo captain Corinne Buie put her team on the board later in the first period, but a penalty shortly after squashed any hope of momentum for the Beauts. Boston capitalized quickly on the power play, with Dempsey notching her second of the game and the Pride taking a 3-1 lead into intermission.

The second period was filled with penalties, making it challenging for either team to get any momentum going. The penalties continued in the third, with Lauren Kelly getting five and a game misconduct for checking from behind, and the Beauts being served several calls of their own.

Mary Parker made it a 4-1 game with under five minutes to play, deflecting a puck that also went off Hsu. Although the Beauts got one goal back late in the game, they ultimately fell flat and dropped the 4-2 decision to the still undefeated Pride.

Hsu made 30 saves in her debut, while Victoria Hanson had 18 saves.

It was the Allie Thunstrom show this weekend, as she recorded four goals in two games as the Whitecaps bested the still-winless Whale.

Thunstrom scored all three goals in Saturday's 3-0 victory for Minnesota, all in the third period. She opened the scoring just 2:34 into the final frame. Amanda Boulier got the puck near the blue line and threw a shot on net from the faceoff circle to the left of Whale netminder Brooke Wolejko. Thunstrom tipped the puck, which also went off a Connecticut skate and in.

She then scored shorthanded nearly eight minutes into the period. A pass from a teammate in the Minnesota end found its way to Thunstrom's stick. From there, she used her speed to beat two Connecticut players down the ice and shot it into the net down low.

Finally, she completed the hat trick with an empty-netter with 31 seconds to play in regulation. Amanda Leveille recorded a 20-save shutout, including a big toe save late in the game, to help her team to the 3-0 win.

Thunstrom would open the scoring in Sunday's game, too. Just 2:29 in, the Whitecaps took a 1-0 lead on her ninth goal of the season as she capitalized on a rebound that came out to the left of Sonjia Shelly.

Connecticut finally got on the board later in the opening frame, with Emma Vlasic tying things up.

Haylea Schmid was the difference-maker, scoring what would end up being the game-winning goal with just 2:06 left in the first period to put Minnesota up 2-1. Meghan Lorence found the puck along the boards near the blue line, skated it into the zone and passed it to Schmid, who was coming up from behind her. Despite being tailed by a Whale player, Schmid was able to get the shot off and finish the play with a goal.

Both teams had several power play chances as the game went on, and Connecticut battled hard to stay with the Whitecaps. Ultimately, due in part to a 37-save performance by Leveille, the Whale were unable to find the equalizer and fell 2-1.

The NWHL announced its 2020 All-Star Weekend, to be held February 8-9 in Boston, MA. The weekend features the Skills Challenge on Saturday night before the All-Star Game on Sunday afternoon. Madison Packer and Jillian Dempsey have been named team captains, with Corinne Buie, Jordan Brickner, Shannon Doyle, Elena Orlando, Kaleigh Fratkin and Kiira Dosdall also named to the ASG so far. Tickets are now available.

The league also recently announced a new sponsorship. AccuWeather, the official weather app of the NWHL, "will power a widget integrated into the league’s website, and will be highlighted in social media posts and newsletters to provide an accurate and detailed weather forecast surrounding NWHL games."

The Beauts and Riveters will hit the ice in the Labatt Buffalo Believes Classic on Saturday night at Buffalo Riverworks, the first regular-season outdoor game in NWHL history. They'll also face off (indoors) on Sunday afternoon. Game times are 7:00 PM Eastern Saturday and 1:00 PM Eastern Sunday.

The Pride look to continue their hot streak as they visit the Whale for games on Saturday (3:30 PM Eastern) and Sunday (1:30 PM Eastern). The Whitecaps are inactive until January 4.