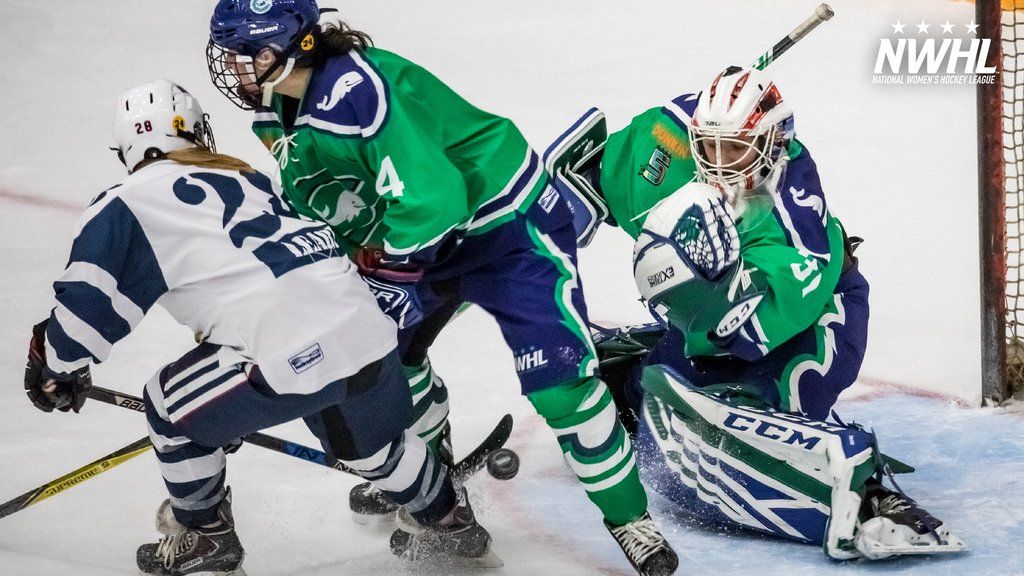 As has come to be the standard in the NWHL, the Boston Pride captured yet another victory this weekend – this time toppling the Metropolitan Riveters – and remain undefeated this season. The Riveters bounced back the following afternoon with a narrow victory over the Connecticut Whale, who are still searching for their first win of the season.

The Buffalo Beauts and Minnesota Whitecaps were inactive this weekend.

The Pride continued their dominance in an 8-3 win over the Riveters on Saturday night.

To little surprise, Boston got on the board first. Shortly after a Riveters' power play ended, McKenna Brand moved the puck up the ice and eventually made a nice pass across to Christina Putigna, who shot it top-shelf from the left of the netminder.

Metro's Kendall Cornine tied the game just over two minutes later. Mallory Rushton brought the puck into the zone on a 3-on-2 and made a pass across the crease to Cornine, to shot it into the net behind Victoria Hanson.

Boston added one more goal before the opening twenty minutes were through, to take a 2-1 lead into the intermission. As the Pride cycled the puck through the zone, and just seconds after their power play ended, a seemingly harmless shot from the center point was deflected into the net. Tori Sullivan was credited with the goal.

Things went from bad to worse for the Riveters, who went down by a pair after Jillian Dempsey scored just 35 seconds into the second period. McKenna Brand then made it 4-1 just over seven minutes into the middle frame; Kate Leary lost track of the forward, who scored on a nice shot for her league-leading 12th goal of the season.

Quickly, though, the Riveters got it back on a huge goal from Leary herself on the doorstep, off a pass from Madison Packer down low.

But just as quickly, any momentum the Riveters may have been building was squashed when the Pride struck again, this time with another goal from the captain, Dempsey. As the Riveters' defense continued to collapse, Alyssa Wohlfeiler further increased her team's lead on a goal from right in front with 7:59 to play in the period.

Wohlfeiler added another goal on a delayed penalty call 2:34 later to make it a 7-2 game. Cornine notched her second of the night with about four minutes remaining in the second period, capitalizing on a shorthanded 2-on-1 and popping the puck in over Hanson's glove. Before the second period was over, however, Mary Parker scored Boston's eighth goal of the night.

The third period was scoreless – but rife with penalties, including a 10-minute misconduct to Madison Packer and 13 minor penalties between the two teams. After sixty minutes, the Pride skated away with the 8-3 win and remained undefeated this season.

With Lovisa Selander away with her national team, Victoria Hanson made 27 saves in net for the Pride. Christina England, signed to a PTO to backup, appeared in the game for 38 seconds and made one save. On the other end of the ice, Sam Walther recorded 17 saves on 25 shots faced in 40 minutes. Dana Demartino stopped all eight shots faced in one period of play.

The Riveters and Whale skated through a scoreless first period, but it came with its ups and downs, particularly for Connecticut. Jordan Brickner was injured in a collision along the boards and left the game; on the very next play, Kayla Meneghin was also injured. Meneghin did return to the game later in the first period; Brickner did not. The Whale were outshot 12-3 in the first twenty minutes – not exactly a promising start for a team still searching for its first win of the season.

Early in the second period, Riveters captain Madison Packer scored from the top of the crease to get her team on the board. Packer got the puck off a backhand pass from Colleen Murphy near the back of the net, over the paddle of goaltender Brooke Woljeko.

The Riveters doubled their lead amid a scramble in front of the net more than halfway through the second period. As the Whale battled to get the puck loose and out of the zone, Cornine was able to pick up the puck and get it past the goaltender on a redirect down low on the short side post.

Connecticut finally found the back of the net late in the second period, as Emma Vlasic scored on a nice shot off a pass from Hannah Beattie. The Riveters got caught out of position, and Vlasic was able to make space for herself to take the shot on the power play.

The Whale maintained that momentum and scored shorthanded to tie it up early in the third period. Kaycie Anderson picked up the puck on a breakaway and, with three Riveters players trailing her, put the puck through Walther’s five-hole.

Connecticut had another shorthanded chance minutes later, while the Riveters nearly went ahead amid a scramble in front. But it would be none other than Cornine, beating the Whale defender along the boards and giving her team the lead with a great shot from the right circle.

Although the Whale battled hard to try to get a tying goal, and had a few good chances late in the game, the Riveters held on for the narrow 3-2 victory, keeping the Whale still winless on the season.

Wolejko made 28 saves in her first NWHL start, while Walther recorded 21 saves.