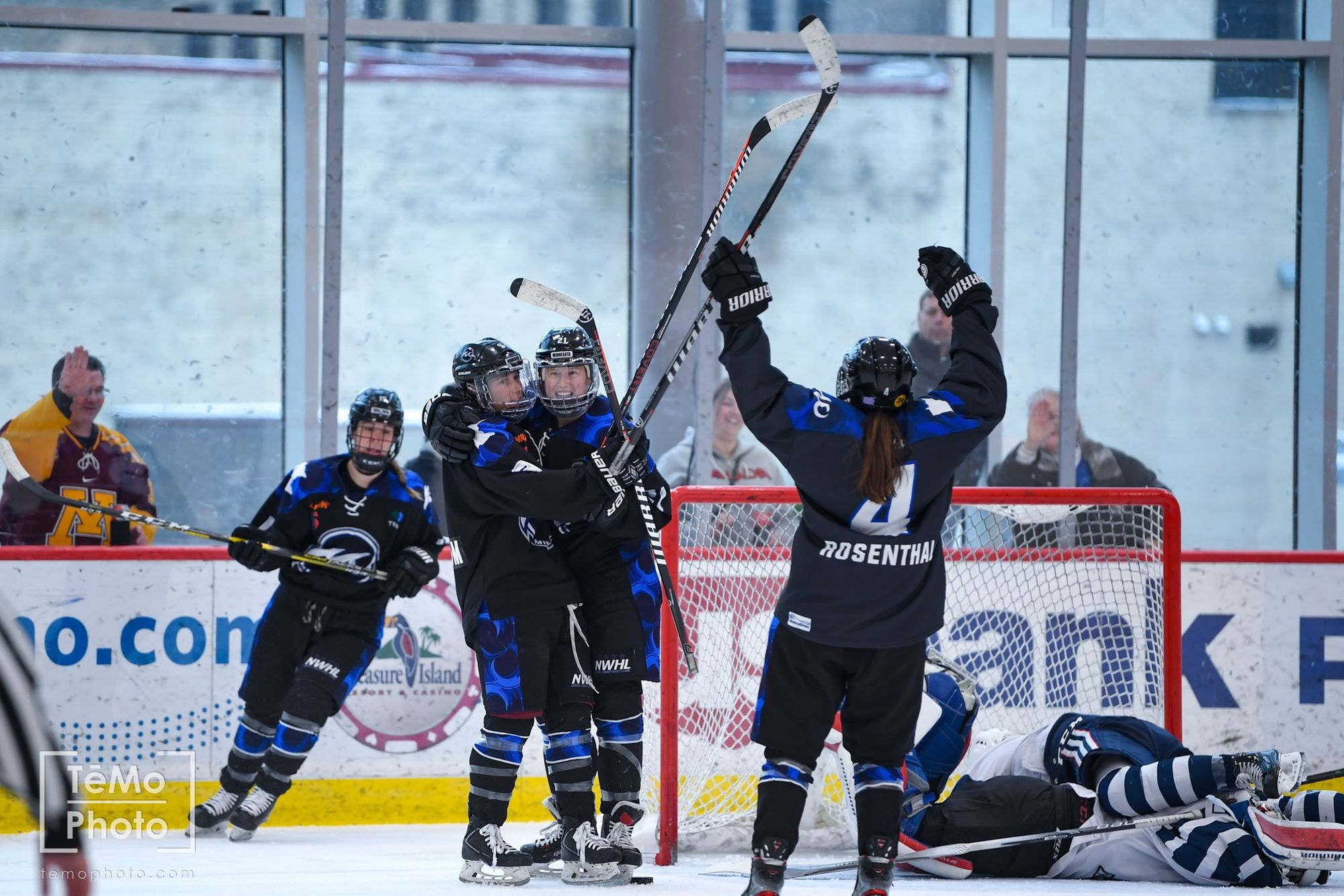 In the only pair of NWHL games this past weekend, the Metropolitan Riveters and Minnesota Whitecaps each earned a win. The Whitecaps are currently locked in a battle with the Buffalo Beauts for second place in the league, but the Riveters aren't too far behind.

On Saturday evening, Metro and Minnesota combined for three power play goals and found themselves locked at two after 60 minutes of play. In the end, Tatiana Shatalova scored the lone goal in the shootout to give the Riveters the 3-2 win.

Kate Leary scored both goals for the Riveters. The Whitecaps controlled the puck for much of the opening minutes of the game, but found themselves on the disadvantage when Winny Brodt Brown was called for cross-checking.

As the Riveters cycled the puck throughout their zone, Leary jumped on a loose puck in the crease amid a scramble around the net. Madison Packer and Cailey Hutchison recorded assists on the goal.

That lead would stand for the remainder of the first period, and part of the second period. Sam Walther played a strong game in net for the Riveters, making save after save as Minnesota peppered the net with shots.

The Whitecaps, however, would finally strike on their own power play 8:32 in, on a goal from Audra Richards. Rose Alleva kept it in the zone at the blue line; she passed it back to Chelsey Brodt Rosenthal, who slid it over to Allie Thunstrom. Thunstrom shot it wide, and the puck bounced off the back wall and came out in front to the waiting Richards, who tapped it in on the back door.

Leary regained the lead for the Riveters late in the second period with another power-play goal, redirecting a shot from Colleen Murphy right in front of the net.

Thunstrom herself would tie the game late in the third period, with just over five minutes remaining. She brought the puck into the zone and did it all by herself, getting around a Riveters defender and finding a way to the front of the net, where she shot it into the net behind Walther.

Tied after sixty minutes of play, the teams went to a fruitless overtime. Tatiana Shatalova scored the lone goal in the shootout on this move:

Saturday's Twitch broadcast was littered with issues. There was no sound for the entire first period, and the video started intermittently freezing as the period went on. Audio for portions of the intermission were "muted" on the stream due to copyright issues, but the sound was finally restored a few minutes into the middle frame.

Although the Whitecaps fell on Saturday, they came out strong on Sunday and scored five goals in the first 43:27 of the game. The Riveters started to find their way back late in Sunday's game, but were only able to get two goals back en route to a 5-2 loss.

Once again, Minnesota controlled play early on. Just over five minutes in, Stephanie Anderson picked up a pass at the middle of the ice, powered through the defense and released a quick shot on net that made its way through to put the Whitecaps up 1-0.

Nicole Schammel tipped in a shot from Amanda Boulier late in the opening frame to double her team's lead. Richards added two goals in 2:42 in the beginning of the second period, putting the Whitecaps up 4-0.

Sydney Baldwin increased her team's lead to five goals in the opening minutes of the third period. Baldwin picked up a puck from Richards and took it in front of the net. After a shot from the slot, she picked up her own rebound for the goal.

Madison Packer broke Amanda Leveille's shutout streak with 5:13 to play in regulation, carrying the puck deep in the zone and tucking it home with a wraparound attempt, finding an open spot next to the post.

Leary scored her third goal of the weekend a few minutes later, but it was all the Riveters could muster as they fell 5-2. Richards had a three-point night on Sunday, with two goals and an assist.