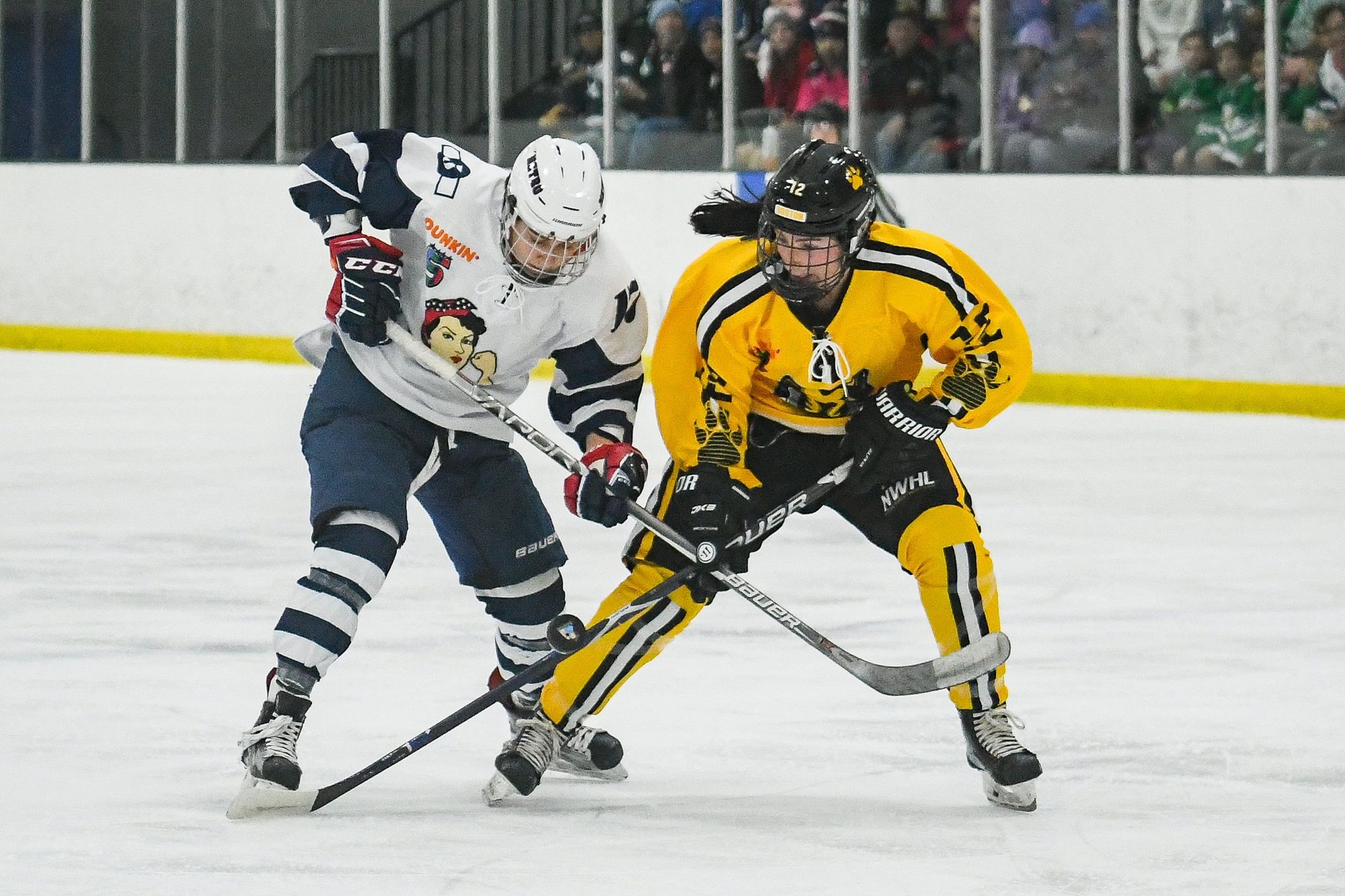 Following another busy weekend in NWHL action, the Boston Pride remain undefeated after sweeping the weekend against the Metropolitan Riveters. Elsewhere, the Minnesota Whitecaps snapped a three-game losing skid with a pair of wins over the Connecticut Whale.

The red-hot Boston Pride improved to a 7-0-0- record on the season, besting the Riveters by scores of 7-2 and 5-3 over this past weekend. Little mistakes made all the difference for the Riveters, including some penalty troubles on Sunday.

On Saturday, the game turned quickly in Boston's favor when the Pride tallied two goals just 17 seconds apart near the end of the first period. McKenna Brand and Kaleigh Fratkin went back-and-forth with the puck on a 5-on-3, when Fraktin finally laid a blast from the point to make it 1-0. Just moments later, Alyssa Wohlfeiler picked up the puck in the faceoff circle to the right of Sam Walther, and Emily Fluke took it top-shelf to double Boston's lead.

Brand made it 3-0 early in the second period after a brilliant pass from Fluke, before the Riveters finally got on the board. Kendall Cornine scored her fourth goal in as many games, tallying a power-play goal on a low, glove-side shot.

The Pride, however, quickly responded as Fluke notched her second goal of the game just 19 seconds later after catching Walther off guard. The Riveters appeared to have trouble protecting their net, and made several late turnovers and soft passes that got them into trouble in the third period.

Mary Parker scored top-shelf on a near 2-on-1 early in the third, and the Riveters had trouble getting out of their own end. The Pride opted to switch goaltenders early in the period, with Victoria Hanson coming in for Lovisa Selander.

Carlee Toews would score on the rebound later in the period, before the Riveters finally got one back on an odd play. The puck appeared to be in Hanson's glove, but as she turned to try to put her glove on it, the netminder's foot/skate pushed the puck over the goal line. Christina Putigna sealed the win with a goal from down low in the final minute for the 7-2 victory.

The Pride wasted no time on Sunday, scoring twice in the opening 6:11 of the game. Toews had her second goal of the weekend, while Tori Sullivan also scored on the power play.

Putigna made it a 3-0 game in the second period. Her one-time shot was pushed through by Mallory Souliotis, who capitalized on a gap between Walther's pad and the post.

Once again, it was Cornine getting her team on the board, cutting to the front of the net after she picked up the puck late in the second period. And yet again, the Pride's response was hasty; Lexie Laing's power-play goal restored Boston's three-goal lead before the second period was over.

As the game went on, it seemed at times that the Riveters were gaining some traction, but that would be squashed by penalty troubles. Pride captain Jillian Dempsey made it 5-1 early in the third period after a nice feed from Brand.

Brooke Avery and Madison Packer would add goals in the second half of the final frame, but it wasn't enough to help the Riveters climb out of the hole. The Riveters received 10 minor penalties over the course of the game, and the Pride capitalized with three power-play goals.

Riveters netminder Sam Walther recorded 108 saves over the course of the two games. On the flip side, Lovisa Selander made 18 saves on Saturday, and Victoria Hanson had 12. Selander returned to the net on Sunday and made 43 saves.

Entering this past weekend's series, Minnesota and Connecticut were both on three-game skids. The Whitecaps came into Danbury Arena looking for a strong weekend, and that's exactly what they got.

Minnesota powered to a 7-2 win on Saturday, but the game wasn't nearly as lopsided as it appears on the scoresheet. Last-minute goals, turnovers and Minnesota's speed crushed the Whale in Saturday's loss.

The two teams really appeared to be playing pretty evenly, but the Whitecaps took a critical lead with just seven seconds remaining in the first period. The Whale couldn't clear it out of the zone whilst shorthanded, despite several chances to do so, and Meghan Lorence pounced on a rebound to make it 1-0.

Emma Vlasic tied the game for Connecticut early in the second period with a gritty shot as she was falling into the boards, but Minnesota added two goals in a span of under two minutes to take a commanding lead. Nicole Schammel scored both goals, including a nice toe drag to get past the defender, using Jordan Brickner as a screen; her second goal got through two defenders in front of the net.

Kaycie Anderson beat Amanda Leveille up high to get one back for the Whale, but the Whitecaps quickly responded with a goal from Haylea Schmid on a tough break for the Whale, with netminder Sonjia Shelly caught out of position. The Whitecaps then added three goals in the third period for the 7-2 win.

Sunday's game was another evenly-matched game, and this time, it actually showed on the scoresheet. The teams remained scoreless through the opening 28 minutes of play, and Connecticut had a lot of trouble getting shots on net as they were unable to sustain any offensive pressure.

Sydney Baldwin made it 1-0 in favor of the Whitecaps with a seeing-eye shot on the power play midway through the game. Kayla Meneghin tied the game early in the third, also on the power play, after a great effort to get the puck into the net.

The Whale took a 2-1 lead several minutes later. Shannon Doyle's shot got through a crowd; it took a couple of bounces before Sarah Schwenzfeier got her stick on it to put it in the net. From there, it was Connecticut's game to lose – and they did.

After holding onto the lead for just over eight minutes, the Whale let Stephanie Anderson's shot slip through, tying the game with 2:31 remaining in regulation. Vlasic then got called for a tripping minor late, and Jonna Curtis scored with just 31 seconds to play. Although the Whale blocked several key shots late, Shelly went down after making a save, and with Curtis on the doorstep, the Whitecaps capitalized.

No doubt a huge contributor to the Whitecaps' success this weekend was Leveille's goaltending. She came up big and made 44 saves over the course of the two wins.

The NWHL schedule now takes a break that was originally planned to accommodate players attending the now-cancelled Four Nations Cup.

Teams return to action the weekend of November 16, with the Pride hosting the Beauts at 6:30 PM Eastern. Buffalo then heads to Connecticut for a 12:30 PM Eastern matchup the following day. Minnesota isn't back in action until November 23, while the Riveters have off until November 30.