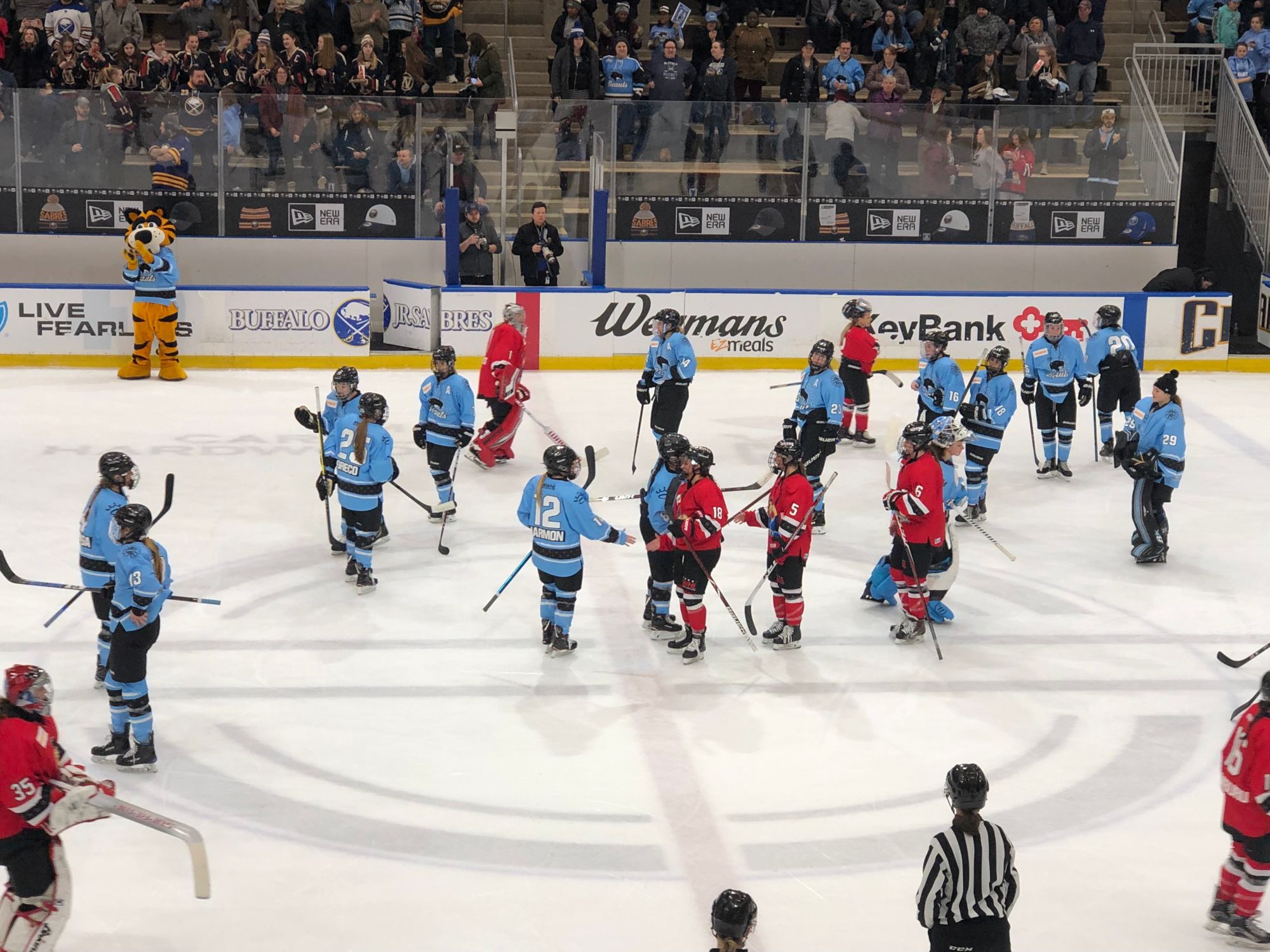 Four of the NWHL's five teams were active in league action this weekend, with the Boston Pride charging to a 6-1 win over the Connecticut Whale and the Buffalo Beauts snagging a 4-1 victory over the Metropolitan Riveters.

A Riveters team looking to snap a three-game losing streak was already missing a few pieces when it headed to Buffalo to face a red-hot Beauts team that had won five straight. Amanda Kessel was scratched; Kelly Nash was also out. Kelsey Koelzer was representing the NWHL in Philadelphia as part of the NHL's Stadium Series.

Teams exchanged chances early on in the game, but it would be Buffalo striking first with just over five minutes to play in the opening period. Amid a scramble in front of the net, Kelly Babstock found the puck and squeezed it in with Katie Fitzgerald down to make it 1-0 Beauts.

"Going into this game, we hadn't played in a while," said Beauts head coach Cody McCormick. "We wanted to make sure we were sharp when we came out. I thought the players played great."

Buffalo played hard and relentless in the second period; that, combined with a slew of penalties to the Riveters, tipped the game further in the Beauts' favor. Taylor Accursi doubled Buffalo's lead early in the middle frame, providing a nice effort and capitalizing on a loose puck that Fitzgerald failed to cover in front of the net.

Minutes later, the Riveters found themselves on a handful of penalty kills that they were able to successfully get through. Michelle Picard was called on a trip; 1:16 later, both Madison Packer and Courtney Burke joined her in the box on cross-checking and tripping minors, respectively. Despite the disadvantages, Metropolitan managed to hold the Beauts off.

Unfortunately for the Riveters, it didn't matter much for Buffalo, who went up 3-0 on a goal by Emily Janiga moments after the teams returned to even strength. Janiga picked up a rebound in front and was on the doorstep to take advantage of the loose puck.

The Beauts outshot the Riveters 16-4 in the second period, and skated into the third period up by a trio of goals. It was a quiet start to the third, with the Beauts ringing one off the post and the Riveters finding a few chances of their own.  Rebecca Russo had the lone goal for the Riveters.

The Riveters pulled Fitzgerald for the extra skater with under two minutes to play and down by a pair of goals, but Janiga quickly capitalized on the empty net to make it a 4-1 game. In front of 1,572 fans, the Beauts won their sixth straight game, remain undefeated at Harborcenter this season and moved into (at the time) a tie for first place in the league.

"As always, it's really good to come up strong, especially in front of the crowd we had tonight," Janiga said after the victory. "Having two weekends off, I think it was really important for us to have a few first good shifts out there and I think we just got our wheels going once we got used to each other and got back in the swing of things."

On Sunday, the Boston Pride came into Connecticut to face a Whale team that had lost seven straight games. The Whale, however, bolstered their lineup earlier this week with several additions, including goaltenders Erin O'Neill and Shenae Lundberg and original Whale captain Jessica Koizumi.

Denisa Křížová picked up a pass from McKenna Brand and backhanded a shot behind Erin O'Neill to make it 1-0 Boston early in the game. The Pride would hold onto that lead for about seven minutes before Michelle Lowenhielm tied the game off a goal on the doorstep to get the puck behind Katie Burt.

The Whale looked lively, but minutes later, Mary Parker regained the lead for Boston. An initial shot was caught by O'Neill, but as she fumbled with her glove to try to recover, the puck came loose and Parker was able to jump on it in the crease.

The Pride continued to pounce on the Whale, taking a 3-1 lead on the power play late in the opening frame. Amanda Pelkey capitalized on a big rebound given up by O'Neill in front to double her team's lead before the first twenty mintues were over.

The Whale were ultimately unable to sustain any pressure for long, and a giveaway led to another Pride goal with just 3:27 to play in the second period. Křížová  took advantage of a turnover and open ice to make it a 4-1 game.

Less than a minute later, Gigi Marvin increased her team's lead further, slapping in a quick pass from Haley Skarupa to the right of O'Neill. Marvin added another with 30 seconds left in the period. With those goals, the Pride carried a 6-1 lead into the third period.

Both teams switched goaltenders to start the third period, with Lundberg coming in to relieve O'Neill and Brittany Ott swapping in for Burt. It was only Ott's second appearance of the season. Both Lundberg and Ott were able to keep their opponents off the scoreboard in the final frame, and the Pride skated off with the 6-1 victory.

With that, the Pride currently hold sole possession of first place in the NWHL for the time being, but it's still anyone's game as to who will finish atop the league and which teams will secure a home playoff game. Check out Michelle Jay's piece from The Ice Garden regarding the NWHL playoff picture.

We're coming up to the last weekend of NWHL regular season action. All five teams are in action next weekend; the Riveters have just one game left, with all other teams with a pair of games.