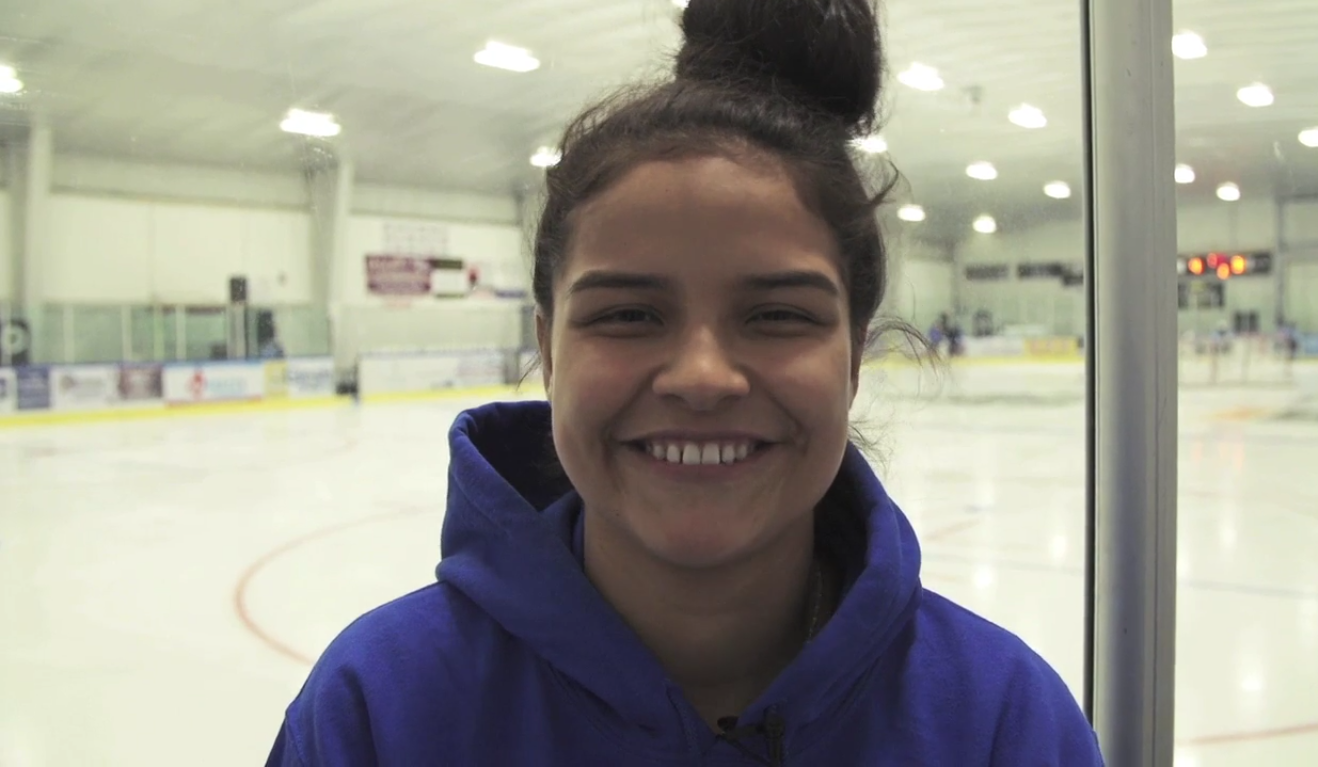 Kennesha Miswaggon was already going far for hockey by the time she realized how far hockey could take her. The Team Manitoba defender grew up in Cross Lake, a small Cree community in the north-central part of the province. After playing on boys' teams for most of her childhood, she joined the NorMan midget AAA girls' team as a bantam-aged player and was spending her weekends driving three to eight hours to play a couple games, then making the return trip in time to be back at school on Monday.

"It was a lot," she says, "But it was worth it, because hockey was the only thing that really mattered to me at the time."

Back then, Miswaggon had no real exposure to women's hockey and says she was completely unaware of the opportunities out there for girls. It wasn't until she was 12 or 13 that she started to hear about her options, including Balmoral Hall, a Winnipeg-based prep school where she currently lives and plays.

"Teams reached out to me that I had no idea existed, such as BH," she recalls with a laugh. "They scouted me and I was like, What the heck is this?"

Now 17, Miswaggon has a wealth of experience that will serve her and Team Manitoba well at the Canada Winter Games.

She's represented her province three times at the National Aboriginal Hockey Championship, where she's helped Manitoba to two gold medals and one bronze, and she'll make her fourth appearance at the tournament later this year. At the Canada Games she's excited to represent her province in a competition that goes beyond just hockey, but it won't be her first time doing that, either. Miswaggon's already got major multi-sport event experience: she won a gold medal in mixed doubles canoe for her age group at the 2017 North American Indigenous Games, which brought together over 5000 young Indigenous athletes across 14 summer sports. While the stage may be comparable, she says her favourite part of the NAIG went beyond the field of play.

"I think just being around my culture. Being around your people, seeing that there's so much talent within the Aboriginal community. It's just awesome."

Her performances at the NAHC have also opened up some unique opportunities. After last year's competition, she was contacted by producers at APTN for the TV series Hit the Ice, which gathers talented Indigenous hockey players for an intensive two-week camp with elite instructors that doubles as reality television. After six seasons focused on boys' hockey, the latest edition grouped promising girls' players and is set to air this spring.

Miswaggon was familiar with the series, but wasn't quite sure what to expect behind the scenes.

"We met for try-outs and it was already like a TV show," she explained. "As soon as you got to the rink, it was already cameras on, and you're just basically playing hockey and trying to fight for your spot. So it was pretty cool.

"I think it'll be a little weird, but I'm going to try to watch it," she laughed. "I was getting interviewed so many times throughout the day, where it was just you or you and another person. You did it so many times throughout the day where you just get used to it. I don't know how many interviews of mine they're going to throw in the show, but there must be a few, so it's going to be funny to watch."

One of her favourite memories from filming was simply finding out that she'd made it past the try-out rounds ("I was kind of worried, honestly -- not gonna lie") and that her friends had made it through, too.

Miswaggon probably had no business being nervous, though. Last summer, she made it onto the national program's radar and was one of 15 defenders invited to Hockey Canada's U18 Summer Showcase.

The next phase of that work will take place at the University of British Columbia, where she's committed for next season. Thanks in part to its beautiful campus, UBC was her first choice from the moment she got to Balmoral Hall and realized she had the potential to continue playing beyond minor hockey. When she met the team on her official visit, her choice was solidified. She'll be studying kinesiology, and hopes to eventually go into nursing.

Miswaggon will also be one of the first girls from Cross Lake to play hockey at the university level. As a kid she had a few favourite NHL players, but never really saw role models in the women's game. More recently, she'd pick out Brigette Lacquette – "that's just some somebody any Aboriginal girl would look up to, just to make the national team." On a smaller scale, she sees herself fulfilling a similar role for young girls in her community.

"We have this showcase of male and female hockey players, whether they're in AAA or playing in the WHL, for example, like Justin Nachbaur, and Brady Keeper's playing [NCAA] Division I. They're all from Cross Lake, so we have this all-star game. A bunch of little kids, they come out for a camp and then they watch us play a game. I like to think of myself as a role model and I try to be that person for them, too. I just want them to know that they can take their hockey to where I'm at."

Where she's at right now is anchoring Manitoba's blue line. We'll be able to watch Miswaggon on TV later this year, but if all goes to plan at the Canada Games, we'll see her and her team sooner than that.

"I just want to try my best, work hard, and try to win the gold," she said.