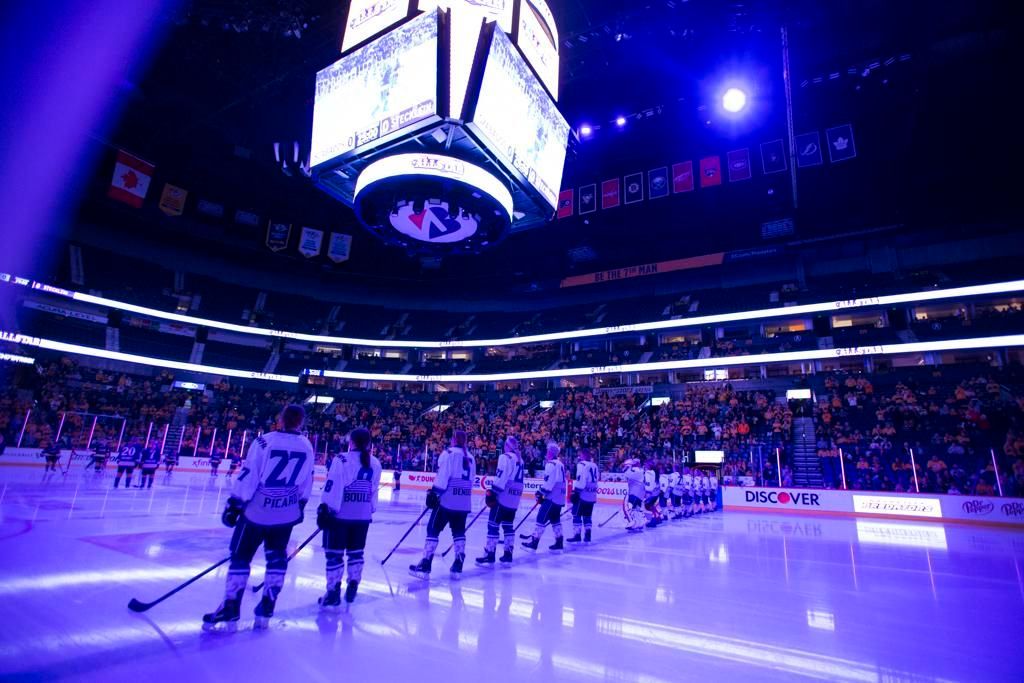 Some of the biggest stars in the National Women's Hockey League descended upon Nashville, Tennessee this past weekend for the league's annual All-Star Weekend. From a sold-out (500 capacity) Skills Challenge on Saturday to an All-Star Game on Sunday that saw over 6,000 in attendance, Nashville proved to be a welcoming community for its first-ever NWHL event.

Nashville marked the fourth different city to host the NWHL All-Star Weekend. Buffalo (and the Beauts) hosted it in 2016, but that is the only time an NWHL team has actually hosted the event. Since then, it's been in Pittsburgh (2017), Minnesota (2018 – before the Whitecaps joined the league), and now, Nashville.

In the end, Team Szabados swept the weekend, winning the All-Star Game in a shootout. Shannon Szabados, who got a shutout in her half of the game, was named the MVP.

Here's a run-down of how things played out.

In accuracy shooting, players competed head-to-head to see who could shoot out four targets in a net with the fastest time.

Amanda Kessel scored the game-winning goal in a shootout to lead Team Szabados to victory in the 2019 NWHL All-Star Game. Teams played two 25-minute halves of four-on-four action.  There was no overtime period; instead, the game went straight to a shootout.

The game began as a battle of Buffalo Beauts netminders, with Shannon Szabados facing Nicole Hensley at the other end of the ice.

Audra Richards got Team Szabados on the board with 9:42 to play in the first half, before Kateřina Mrázová made it 2-0 off a beautiful backhand pass from Shannon Doyle, firing it top shelf over Hensley's shoulder minutes later.

Katie Burt and Amanda Leveille took over in net for their respective teams for the second half. Quickly, Team Stecklein got on the board with a goal from Lisa Chesson, who scored on a shot that made its way through a crowd. Chesson deflected the shot, which originally came from Gigi Marvin.

Emily Fluke then put it between the goaltender's legs to tie the game at 2-2 with 12:32 to play in the second half. The score remained tied after 50 minutes, and the game headed right to a shootout.

Kessel had the lone goal in the shootout to give her team the victory – and the reported extra prize money offered to the winning team by NWHL sponsor Dunkin'.

Yay: The official attendance was 6,120, which is the biggest crowd ever for an NWHL game. It also sets a record for attendance for a professional women's hockey game in the United States. (College hockey has broken that mark, as well as a previous CWHL All-Star Game.)

Nay: The league certainly had some issues with its broadcast on Sunday. The feed dropped its audio for part of the first half of the All-Star Game before coming back during intermission. The audio then dropped again to start the second half. There were a lot of viewers on the stream, but once the audio dropped, those numbers plummeted. It's understandably frustrating to see this game getting viewership, only to have technical difficulties cause some to stop watching.

Okay: The NWHL is definitely playing around with its rules when it comes to the All-Star Weekend. This year, the Skills Competition "score" was not counted in the All-Star Game score, which had been the case in years past.  (As in, the amount of points accumulated during skills competition counted as goals on the scoreboard once the ASG began.) In addition, the idea of jumping from regulation straight to a shootout was something new.

Yay: According to the NWHL and Twitter, the All-Star Weekend had nearly one million views on Twitter, between the Skills Competition and the game itself. At one point, there were potentially over 23,000 people watching the stream of the game, though that number went through some inflation and deflation over a matter of minutes.  While viewership numbers on Twitter are hard to verify as unique sessions, it's clear that many people tuned in to the game and responded to it on social media.

The NWHL returns to action on Monday, February 18 with the rescheduled Boston Pride vs. Metropolitan Riveters game.