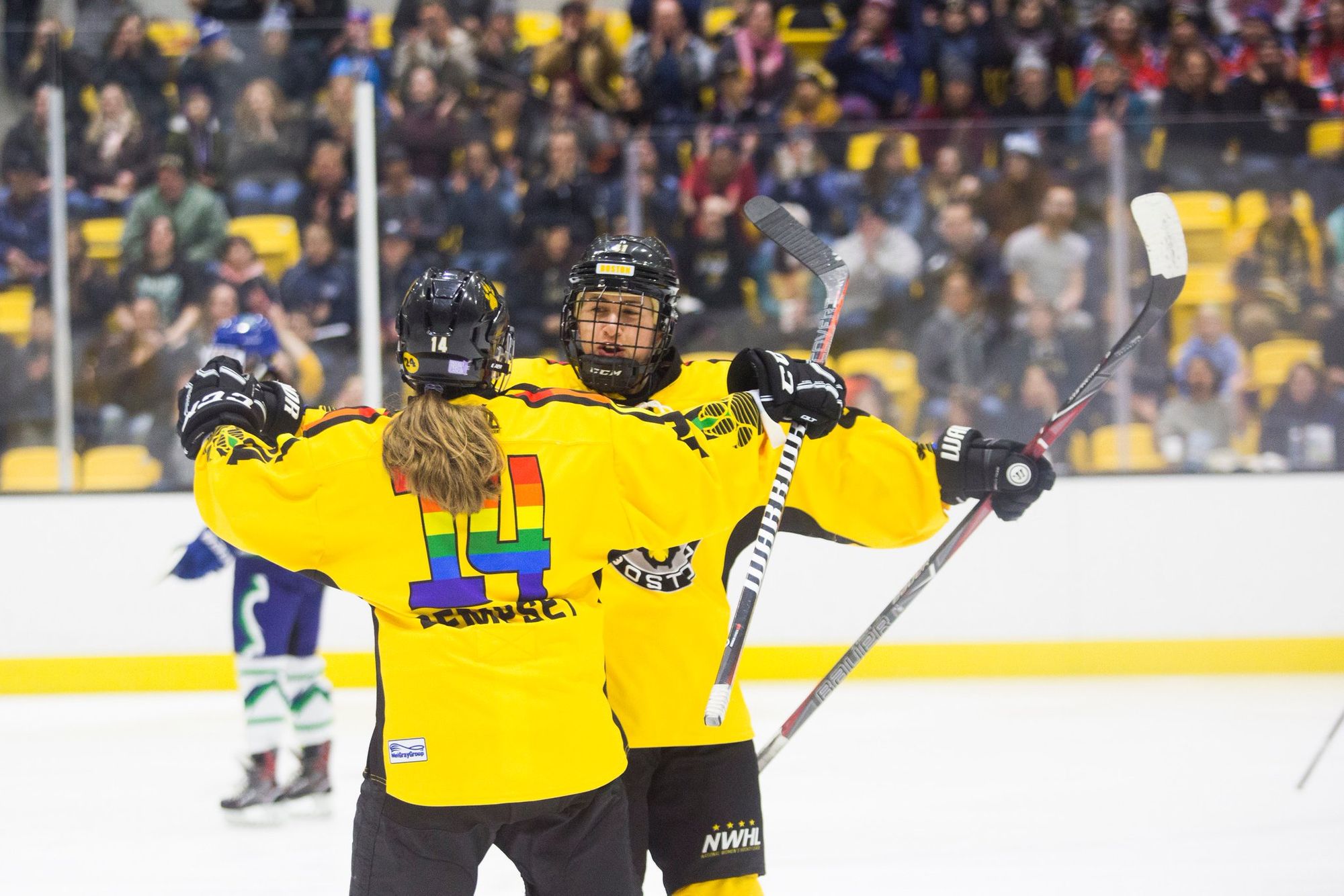 The Buffalo Beauts and Boston Pride came out on top in NWHL action this past weekend, as four of the league's five teams were in action in league play. Buffalo has now won five straight. On the flip side of things, the Connecticut Whale have lost seven straight games and continue to hold the basement spot in the NWHL.

As the Riveters began to find their legs and get some shots on Nicole Hensley, the game seemed to even out a little bit. Taylor Accursi, however, tipped the scales in Buffalo's favor, pouncing on a puck in front of the net to giving the Beauts a 1-0 lead with under three minutes to play in the first.

Rebecca Morse scored a critical tying goal in the opening minutes of the second, taking advantage of a rebound to get the puck behind Nicole Hensley as Buffalo's defense collapsed. Morse's goal sparked a bit of a scoring flurry on both sides.

Julianna Iafallo broke the tie minutes later, deflecting in a shot by Jordyn Burns from the blueline. Just about three minutes later, Savannah Harmon doubled Buffalo's lead on a one-timer on the power play. But the Riveters kept coming, and former Beaut Kristen Lewicki got her first of the season on a weak goal as Hensley failed to stay tight to the post.

After an exciting, fast-paced ten minutes of the second period, the game settled down. Both teams had a few good chances, including a beautiful one by Hayley Scamurra later in the game and a shot off the post from Dani Cameranesi, but the Beauts continued to hold a one-goal lead.

The Riveters headed to what could've been a huge power play with just 2:13 to play, as Emily Pfalzer was sent off for the Beauts. However, they squandered their chance when, just 13 seconds later, Courtney Burke was penalized for shoving Scamurra to the ice in front of the net.

Katie Fitzgerald did eventually come off for the extra attacker, but the Beauts managed to keep the puck out of the net, despite a very good last-second chance by the Riveters (literally, with 1/10th of a second left on the clock.) Fitzgerald was credited with 25 saves in the loss, while Hensley made 22 saves.

Saturday's game was the "You Can Play" game for the Riveters, who sported jerseys with special rainbow details on the sleeves and numbers. I suggest everyone go back and read Andrew's piece, published in November 2017, about how YCP promotes assimilation rather than inclusion:

At their core, Athlete Ally and YCP reflect an understanding of allyship that promotes the status quo and articulate mandates of assimilation, not inclusion. "If you can play, you can play" is an appropriate slogan for YCP, because it illustrates the organization's limited mandate. The slogan frames queerphobia in sports as a question of merit while limiting the discussion of inclusion to a given athlete's talent. However, homophobia, biphobia, and transphobia in sports has never actually been an issue of ability.

In addition, it's important to recognize the conflict in players like the Riveters' Rebecca Russo – who has previously posted a photo on her Instagram wearing a pro-Trump shirt and blocked fans who criticized her – wearing a jersey meant to support inclusion, allyship, and support of the LGBTQ+ community.

The Boston Pride got started early on Saturday, with Denisa Křížová scoring just 1:20 in off a feed from McKenna Brand. Brand got a shot in on net and was able to pick up the rebound and get it back to Křížová, who was parked in front of the net and put it behind Whale netminder Shenae Lundberg.

It would turn out to be a pretty even first period, with the Whale tying the game in the final minute of the opening frame. Up until that point, Connecticut had struggled a bit in sustaining zone time or pressure. But Rachael Ade scored the equalizer with 55 seconds to play, firing the puck into an essentially wide open net with Katie Burt coming out to try to play the puck.

Pride captain Jillian Dempsey broke the tie less than two minutes into the second period with her 28th career goal. Křížová carried the puck into the zone, shot it to Brand in front and Dempsey pounced on the free puck as the opportunity arose.

The tide of the game really turned in Boston's favor with just over half of the third period remaining. Nine minutes in, Connecticut's Shannon Doyle got sent off for hooking, and it took the Pride just 20 seconds on the power play to capitalize. Toni Ann Miano scored on the advantage after poking the puck out from under Lundberg's pads. After a scramble in front, Lundberg had the puck covered with her leg pads, but no whistle was blown and Miano was able to poke it out.

Just prior to the goal, Křížová went down hard and hit her knee on the boards. She was helped off the ice by her teammates.

Less than two minutes later, things went from bad to worse for the Whale. Ade was called for hooking and sent to the penalty box. Before the play had started back up, it appeared that captain Emily Fluke was unhappy with the call. She was served with a 10-minute misconduct.

At the time, many were confused as to what exactly had warranted the misconduct. Fluke posted via a now-deleted Tweet that she had asked the referee if she should be officiating the game considering she had once played for the Pride. NWHL teams are inconsistent as to whether or not they list the officials in the online gamesheet; for Saturday's Boston game, none are listed.  It is unconfirmed, but believed that the referee in question is Kelly Cooke, who played for Boston in their inaugural season. Cooke is the NWHL Director of Player Safety and a USA Hockey official. Cooke is listed as having officiated one other Pride game this season.

With all that being said, the Pride held on for the 3-1 victory as Burt made 25 saves. Lundberg stopped 22 of 25 shots faced in her season debut.

The NWHL is now off from league action for a few weeks. The league will travel to Nashville, Tennessee for its All-Star Game this coming weekend. The All-Star Game is scheduled for 2:30 PM Central on Sunday, February 10.