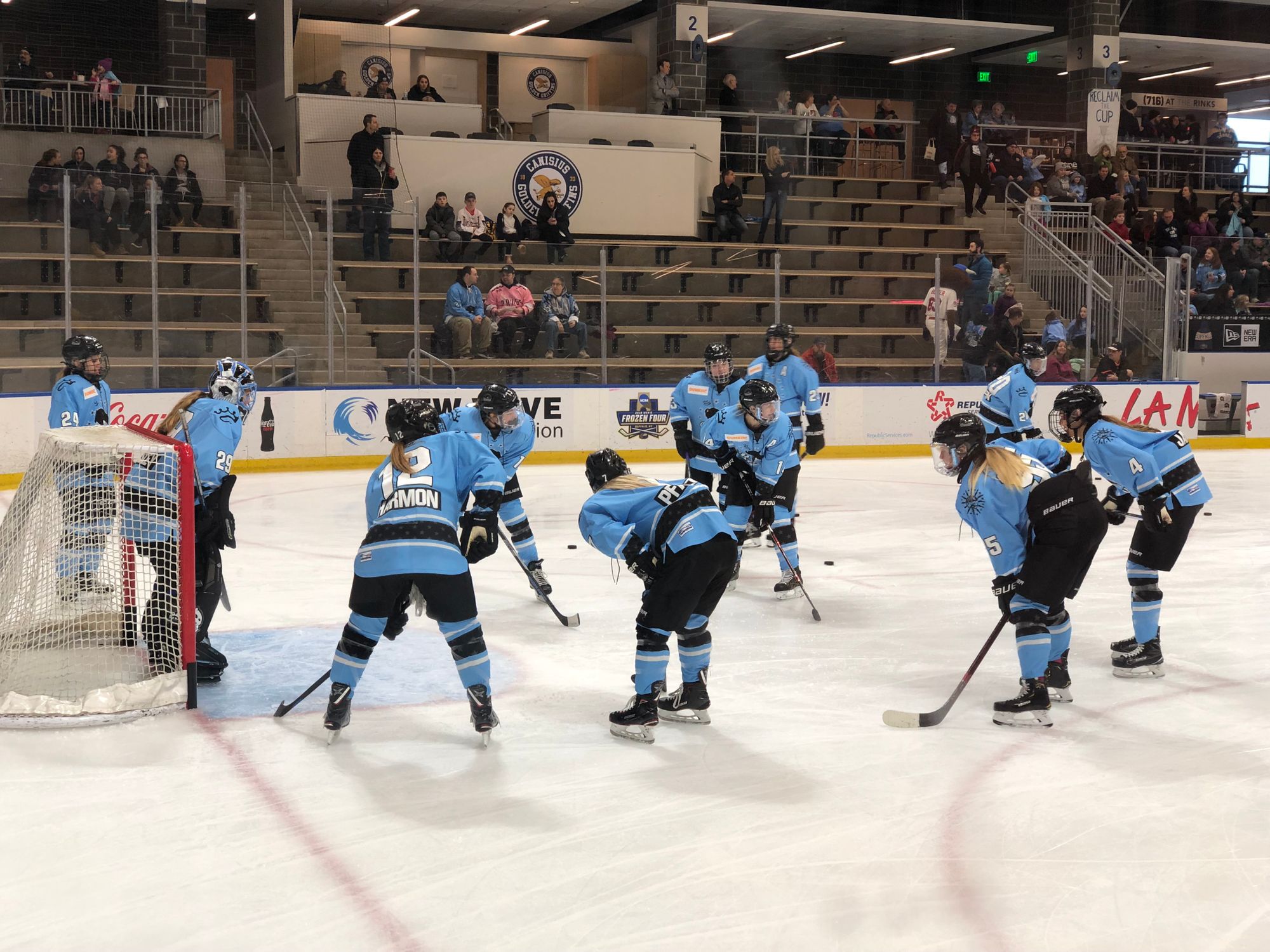 The Buffalo Beauts captured a commanding 5-0 win over the league-leading Boston Pride Saturday afternoon, ending the Pride's four-game winning streak and refusing to allow them to capture sole possession of first place in the NWHL. The Pride remain tied with the inactive Minnesota Whitecaps for the top spot in the league, as Minnesota played only exhibition games this weekend.

On Sunday, the Metropolitan Riveters, powered by a five-assist performance from Amanda Kessel, beat the Connecticut Whale 6-3. The two teams are now tied with six points each on the season, but the Whale have a game in hand.

Despite a strong first period, the Beauts and Pride remained scoreless after twenty minutes. Buffalo outshot Boston by a margin of 19-10 in the first period, with Kelly Babstock registering many of those shots on goal, from shots from the blue line that made their way through a crowd to close shots from right in front of the net. Taylor Accursi also had a breakaway chance, but couldn't stuff it behind Boston netminder Katie Burt.

With that being said, Shannon Szabados did her part to keep the Pride off the board in the first period. She faced several dangerous shots including on a sequence where she was forced to make one save after another with little to no recovery time in between.

The Beauts continued to put on the pressure early in the second period, but the Pride had a huge opportunity with a five-minute power-play after Emily Pfalzer was given a major penalty and game misconduct for checking from behind on Amanda Pelkey. Pelkey did not return to the game.

While Boston had a chance to get on the board, it ended up being a significant penalty kill for the Beauts as they get rid of the five-minute major. The Pride had a few good chances, but Szabados stood tall. Buffalo also managed to get some shorthanded zone time and a few good chances from Babstock and Corinne Buie, among others.

"That was pretty intense," said Blake Bolden after the game. "We knew we had to kill it. Once we killed it, I think we took that momentum into the game."

Babstock's hard work finally paid off, as she opened the scoring with 5:31 to play in the second period. Babstock got the puck off Blake Bolden's stick, got crafty and got Burt out of position just enough to slide the puck behind her and into the net. The goal was her first of the season and first as a member of the Buffalo Beauts.

"We had a bunch of chances, and the goalie made some great saves on us," Babstock said. "It was just a matter of time for us to get a goal. Luckily, we did everything right, and it just went in."

"It was awesome getting my first goal as a Beaut," Babstock added with a smile. "I've been waiting for it since the beginning of the season. I'm happy the monkey is off my back."

The Beauts would get another crack on the power play near the end of the second period, and they were able to capitalize on this one. Emily Janiga made a nice shot from in front of the net off a pass from Babstock at the point to make it a 2-0 game with about five seconds left in the middle frame.

Early in the third period, Buffalo's Maddie Elia took a high stick to the throat and was in visible discomfort. She went off to the locker room for a few minutes but returned a short time later.

Just a few minutes in to the third period, the Beauts took a 3-0 lead on Savannah Harmon's second goal of the season. The Beauts had a lot of chances and the Pride were trying to stuff the puck under Burt so the play would be blown dead, but it remained loose and Harmon slapped it high into the essentially empty net.

Buffalo continued to add to their lead, with Dani Cameranesi scoring her second of the season moments later. Cameranesi skated the puck into the zone, gow low near the net and shot it between Burt and the post for the tally.

Burt allowed four goals on 38 shots faced before Brittany Ott came in to relieve her.

It took Buffalo a few minutes to register a shot on Ott, but when they did – it went in. Cameranesi scored her second of the afternoon on a breakaway, giving the Beauts a commanding 5-0 lead. Hayley Scamurra and Elia were credited with assists.

"We were firing on all cylinders," Bolden said.

The Pride didn't sit back and continued to put shots on net, but they were unable to solve Szabados and the Beauts. Meanwhile, Buffalo went 6:26 without a shot after Cameranesi's second goal of the afternoon, but with a five-goal lead in their pocket, they were still able to secure the win.

Shannon Szabados earned a 30-save shutout, while the Boston goaltenders combined for 35 saves on 40 shots faced.

On Sunday afternoon, the Metropolitan Riveters and Connecticut Whale met for the final time this regular season. With a 6-3 win, the Riveters tied the season series and are now tied with the Whale for fourth in the NWHL. Amanda Kessel had a spectacular afternoon, with five assists.

Audra Richards opened the scoring for the Riveters just over five minutes in, picking up a feed from Madison Packer on the power play to make it 1-0. Packer attempted a wrap-around, and the puck deflected off Richards' stick and ever-so-slowly slid into the net.

Packer got her own goal a few minutes later, picking up a puck that was sliding into the zone. She caught up to the puck, made a nice move to get Meeri Räisänen out of position, and tipped it over Räisänen's shoulder.

The Whale finally got on the board later in the first period. With just under six minutes to play, Nina Rodgers scored on a 1-on-3 player, shooting it right between the Riveters defenders and over the glove of Maria Sorokina.

Just 1:01 after losing their two-goal lead, the Riveters got it back. This time, it was Alexa Gruschow putting the puck in the net after a few nice passes from Kessel and Miye D'Oench.

Jamie Goldsmith made it a 3-2 game early in the second period, but the Riveters scored twice in under five minutes to increase their lead to 5-2. Audra Richards had her second goal of the game on another power-play tally.

With Packer in the box, the Whale took advantage of the power play just one minute into the third period. Emily Fluke helped close the gap for Connecticut, taking a cross-ice pass across the blue paint from Katerina Mrázová and putting it into the empty side of the net.

Ultimately, the Riveters held on for the win. D'Oench added a goal later in the third period, and Metro held off Connecticut from being able to get back into the game.

Sorokina made 18 saves in her Riveters debut. Räisänen had 13 saves in the loss.

There are three NWHL games this upcoming weekend. The Minnesota Whitecaps are back in action with league play in Boston against the Pride. They'll face off at 7:30 PM Eastern Saturday and 3:00 PM Eastern Sunday.

Elsewhere, the Riveters visit the Beauts for a 1:30 PM Eastern puck drop Saturday.