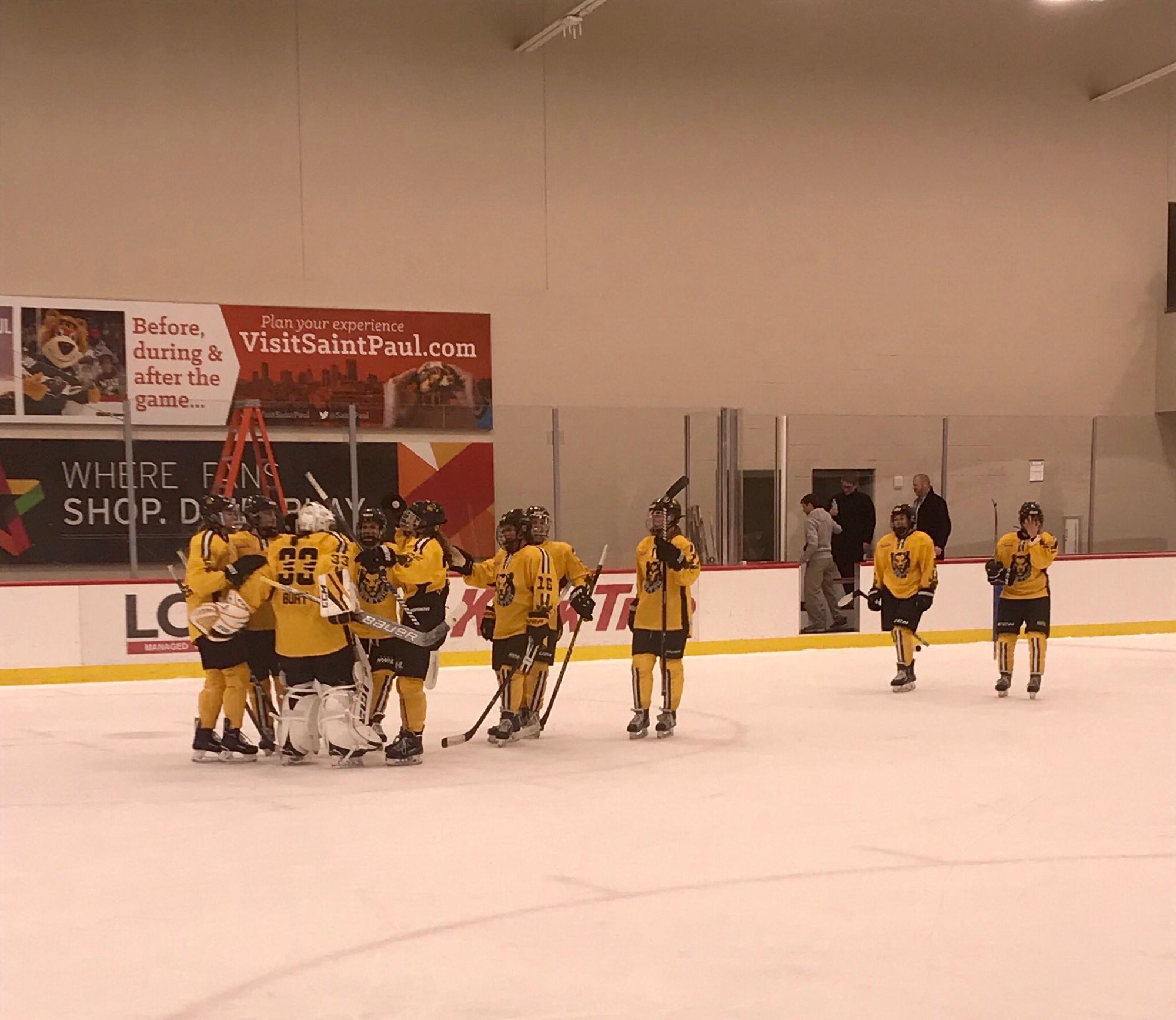 The Boston Pride had a huge weekend in NWHL action, ending the Minnesota Whitecaps' unbeaten streak and capturing two wins of their own. In Pittsburgh, a neutral-site game between the Metropolitan Riveters and Connecticut Whale saw the Whale come away with their first regular-season shutout in franchise history.

The Buffalo Beauts were inactive this weekend in league play but faced three of a four-game series against Team Russia in Ontario.

The Pride were, perhaps, the surprise of the weekend as they beat the previously-undefeated Whitecaps by scores of 5-1 and 7-2, both sold out games at TRIA Rink.

In Saturday's game, Mallory Souliotis opened the scoring for Boston near the end of the opening period when she took a shot from the middle of the zone that made its way into the net. Jillian Dempsey made it 2-0 just over a minute later on a shot from the point that got through a screen.

The Whitecaps got on the board early in the second period, when Amanda Boulier's shot from outside the faceoff circle made its way into the net. But the Pride would regain the two-goal lead on a power play tally by Haley Skarupa in the dying seconds of the middle frame, off a nice point shot from Alyssa Gagliardi.

The third period of Saturday's game was the Gigi Marvin show, as the hometown hero scored twice to push the Pride to victory. From a top-shelf shot that hit the top corner of the net, to a tic-tac-toe play, Marvin had a solid weekend, which earned her Player of the Week honors.

It was another commanding performance from Boston on Sunday in the rematch. Marvin continued her hot streak, opening the scoring for the Pride with a shot from the faceoff circle to the left of Amanda Leveille.

McKenna Brand made it 2-0 midway through the period as the Pride were able to capitalize on their passes. It took several more minutes before the Whitecaps were finally able to get a goal, this one from Emma Stauber on a rebound.

The momentum, however, was all in Boston's favor. Amanda Pelkey scored just 32 seconds into the second period after a Minnesota turnover at the blueline, making it a 3-1 game.

Following that goal, the Whitecaps pulled Leveille in favor of Julie Friend, who played the rest of the game but didn't have much better luck.

Once again, Minnesota got one back as Kate Schipper scored on a breakaway – but that was all the offense the Whitecaps would manage, as the Pride would then tally four unanswered goals, including three in the third period.

Alyssa Gagliardi scored on the power play with about three and a half minutes to go in the second period, tipping the puck in near the net. Souliotis got her second goal of the weekend early in the third on a deflection.

Denisa Křížová and Skarupa then scored 43 seconds apart later in the third to help seal the 7-2 victory. The Pride kept the Whitecaps under wraps, particularly on the power play: Minnesota went 0-for-7 on the weekend.

The Connecticut Whale overpowered the struggling Metropolitan Riveters en route to a 4-0 win at the UPMC Lemieux Sports Complex in Cranberry, Pennsylvania.

Nina Rodgers got her team on the board just 3:28 in, scoring on the rebound after the Riveters cycled the puck a bit in the zone. The Whale maintained that lead until more than halfway through the second period, when Katerina Mrázová made it 2-0 off a rebound. The Riveters dominated the second period but failed to solve Meeri Räisänen.

Meanwhile, the Whale continued to showcase their offensive skill, with Shannon Doyle adding a goal on a breakway in the third period. Juana Baribeau then scored an empty-netter in the final minute of play to seal the 4-0 victory.

Räisänen made 31 saves in her first NWHL shutout, which was also the first regular-season shutout in Connecticut Whale franchise history.

The Buffalo Beauts were off from NWHL action this week, but played the first three of a four-game exhibition series against Team Russia in Niagara Falls and St. Catharines, Ontario.

The NWHL All-Star Game will be held in Nashville, as was previously announced. Fan voting closed at 11:59 PM Eastern on Monday, with two players ultimately being chosen by fan vote: Emily Fluke (CT) and Audra Richards (MET). The rest of the rosters will be revealed later this week.

The Buffalo Beauts finally return to league action this coming weekend, hosting the Whale for a 6:00 PM Eastern puck drop Saturday. Buffalo has played only one home game so far this season, so they've got some catching up to do.

The Pride and Riveters will meet in New Jersey on Sunday, with puck drop set for 2:00 PM Eastern. After that, the NWHL is off until December 29.