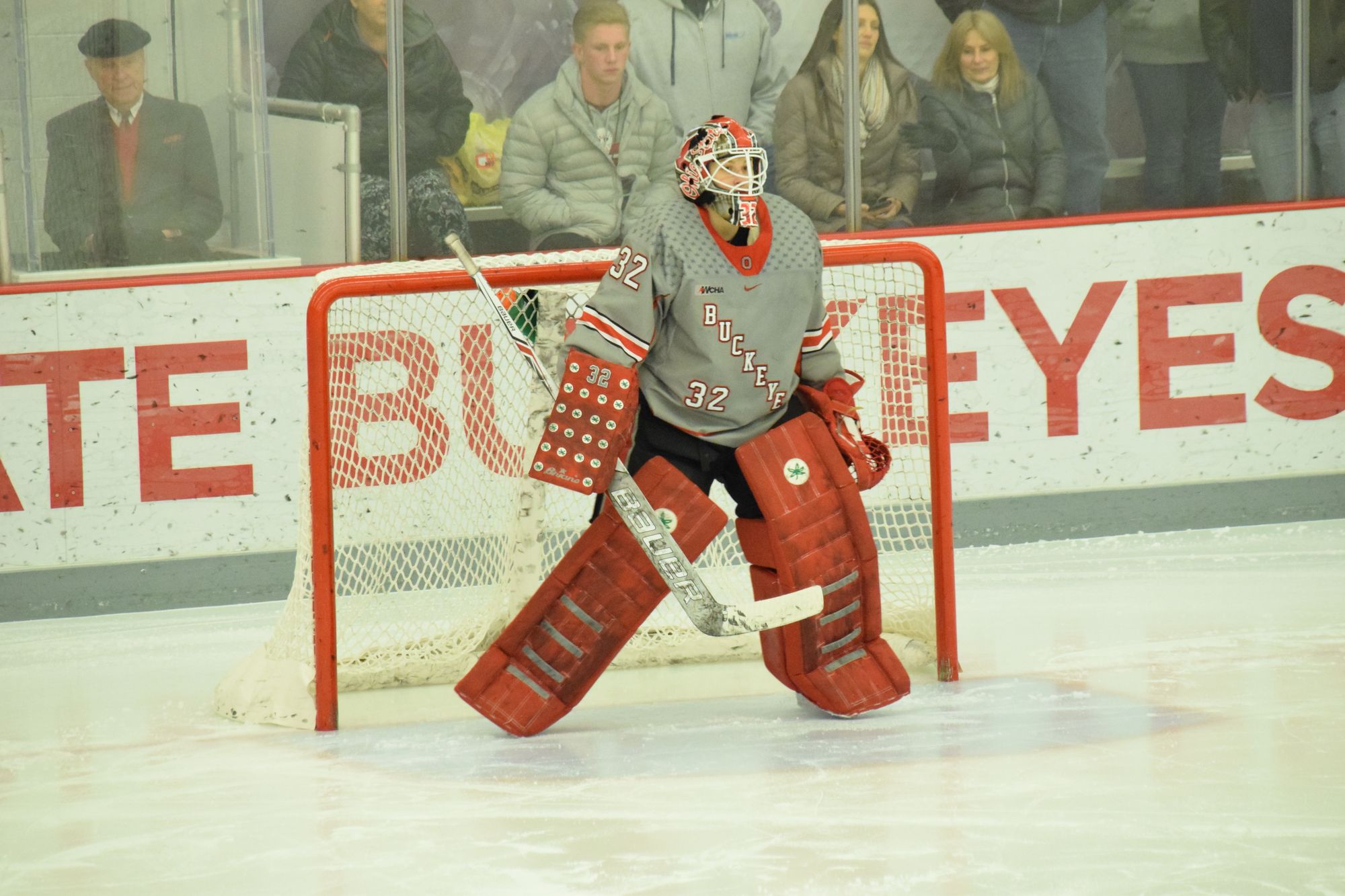 In the course of Kassidy Sauve's four years at Ohio State, the program had three head coaches, nine assistant coaches, and four goalie coaches. She committed to two different coaches before she stepped on the ice as a rookie. Her body has taken a beating. As the last of the players and closest friends that she started her Ohio State experience with graduated and moved on, Sauve, who graduated from Ohio State in May, began to consider that there might be other options for her.

The previous few seasons had left her emotionally, mentally, and physically drained. She was feeling a bit lost and disconnected. She normally takes time after the hockey season away from the ice to rejuvenate, but that had become difficult for her. So she reached out to the NCAA to be granted release and gather all the information she needed to start to consider transferring. The more she thought about the benefits, the more it felt like the right decision.

"There was a lot of reasons to go and obviously, there's a lot of reasons to stay to. It wasn't an easy decision. There are so many things that contributed to this decision," she said. "I had no idea what I was getting into. I kind of just took the gamble and hoped for the best."

One her release was granted, there came the bigger decision of figuring out where to go next. She said she had no specific school in mind, so she started narrowing it down based on her reasons for leaving Ohio State.

First and foremost, she wanted to be closer to her family. Her parents are her biggest supporters and often made the eight hour drive from Whitby, Ontario to Columbus, Ohio to watch her play. Transferring to a school that would require even more travel didn’t make sense for her, so going to any other WCHA school, all of which were further away from home, was out of the question.

Sauve also said she was interested in playing at an East Coast school because of the exposure it would give her to NWHL and CWHL clubs, who are primarily anchored in the eastern part of the US and Canada. When she was a freshman, that wasn't even a possibility. Now the thought playing hockey beyond college is a real possibility, and she wanted to make sure she was doing everything to help her chances of doing so.

From there, it was matter of finding the right fit.

Clarkson coach Matt Desrosiers characterized the transfers his program picked up this summer as having fallen in his lap. He and his staff were not actively looking to pick up anyone, but the two-time defending national champions have created a situation in which players are asking to come there. It just so happened that the Golden Knights had some scholarship money available for one year.  They added Sauve and Quinnipiac transfer T.T. Cianfarano.

Clarkson University offers a 1-year accelerated MBA program, which can be an incredibly inviting draw for student-athletes who've completed their undergraduate degrees, but have remaining NCAA eligibility. Other men's and women's hockey players have followed this path, so incoming players know it's possible to balance the school work with being a student athlete.

Sauve had reached out to friends and former teammates to get a read on Clarkson. She liked what she heard about the program and coaches, as well as the academics and her decision was made.

"It ended up being obviously a win-win to go the best team in the nation and be able to get my Master's in a year," she said. "It ended up working out that this is where I wanted to go to both academically and athletically."

Though the academics, proximity, and hopeful impact on future playing prospects were the initial draw, there's something else about playing in the ECAC that Sauve admits she has thought about.

She knows every season is different and the defensive makeup at Clarkson this season could change how many pucks make it to the net, but Sauve said she can’t help but think of what kind of impact seeing fewer shots per game will have on her body.

Sauve refers to herself as a grandma, partly because she's older than all her teammates, but also because her hips ache in the rain. She had bilateral hip surgery and missed the entire 2015-16 season, spending nearly 600 days off the ice. There hasn't been a college season where Sauve wasn't relieved when the final whistle blew. She faced 2186 shots over the past two seasons. (By comparison, Clarkson goalie Shea Tiley faced 1,1719 shots over the same time frame–467 fewer shots.) Sauve played in last year's NCAA playoffs with a knee injury. She suffered concussions and numerous other setbacks. Getting back into game shape every week was becoming increasingly difficult.

"I think that [playing in the ECAC] might a little bit better on my body, recovery-wise," she said. "It'll be nice for my body to not get 40 shots a game, because after a weekend where let's say I'd get 75-90 shots in a weekend, I'm going to be very honest with you, it was very hard to walk the next day... I hardly ever practice on Mondays at OSU, sometimes not Tuesdays, depending on how I was feeling."

Once Sauve made the decision to transfer and chose Clarkson, she said it felt like a lot of other things fell into place, which was a markedly different feeling than she had at this time last year.

"I need a lot of time after a long season to debrief and get away from hockey for a little bit. I like to do a lot of other things and just unload after a long season. I feel like I went into May camp and August camp [with Hockey Canada] last year, I didn't properly do that for myself," she said.

This August, she was once again invited to the Hockey Canada development camp. Sauve was not eligible for the U-18 or U-22 squads as she's already turned 22, but Hockey Canada invited her anyway and Sauve said it ended up being one of the favorite camps she's ever done.

There's always pressure to perform and impress at the camps, but being ineligible for any roster took some of the mental stress out of the experience for Sauve, which made it easier for her to perform, she said.

Clarkson looks to get a physically, mentally, and emotionally renewed Kassidy Sauve on the ice for the 2018-19 season. "I’m in a good mental place," she said. “[Going into this camp] I felt calm. I felt really at peace with hockey and I think that’s why it went well. I think that I'm really falling in love with hockey again and I think that's really important."