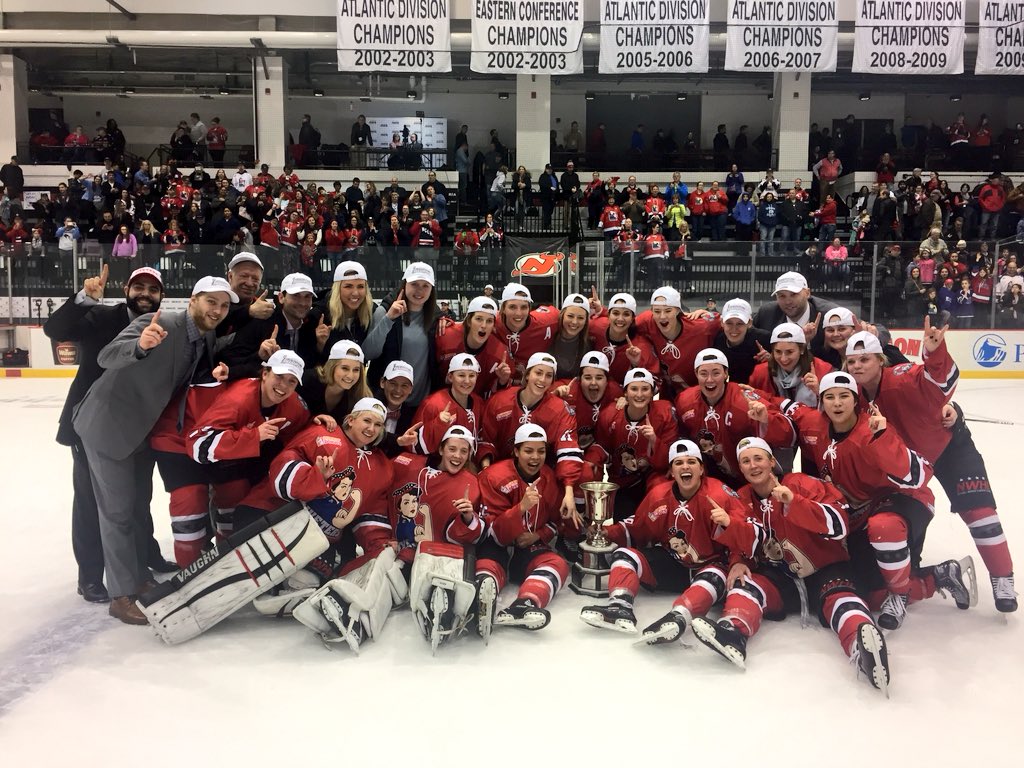 In the three seasons of the NWHL's existence, three teams have now won the Isobel Cup. The Metropolitan Riveters won their first championship in franchise history with a 1-0 defeat of the Buffalo Beauts Sunday at the Barnabas Health Hockey House.

In front of a sold-out crowd, the Riveters captured the championship to cap off a season that saw them finish first place in the league and lose just three games during the regular season.

"To win a championship game 1-0, that doesn't happen very often," said captain Ashley Johnston. "I think that says a lot about us as a team."

Alexa Gruschow scored the lone goal in the game, just 5:33 in. Miye D'Oench led the Riveters on the breakout, then passed up to Gruschow, who carried it into the Metro zone. The duo passed back-and-forth several times before a flying Gruschow slammed the puck into the net.

"I slid it over to Miye and she had great patience and poise and was able to get it right back to me on my stick," Gruschow said. "It went through the defender's legs and I just saw it on the other side and somehow, I was able to lift it up high that close. I think I fell over the girl's stick and flipped all around and celebrated on my butt, and it made it even better."

As it turns out, that would be all it would take for the Riveters to seal the championship. The Beauts had several chances to tie it up, and the Riveters had opportunities to increase their lead, but it remained 1-0.

"Every shift, every action, every little thing, that you might not think matters, make sure that you do it, and you do it the Riveters hockey way," Johnston said of her team's efforts to maintain the lead.

The scariest moment of the game came near the end of the opening period. With just about two and a half minutes to play, Buffalo's Sarah Casorso ran Madison Packer into the end boards on a dangerous play. Packer was down on the ice for several minutes and was helped up by her teammates and a trainer.

She returned to the ice for the second period. Casorso received a minor penalty and a 10-minute misconduct on the play. Both of these decisions seemed questionable at best; the officiating throughout the game seemed to err on the side of not calling things (including offsides and penalties, on both sides) rather than calling them.

While it's perhaps understandable -- to a point -- to have a "let them play" in a championship game, we've seen before in hockey how dangerous plays can change the course of a game, as well as a player's life. Hopefully Packer is okay as a result of the hit.

Both Fitzgerald and Amanda Leveille played strong in net, which was expected from the league's top two goaltenders. Fitzgerald was named Most Valuable Player after the game, a certainly deserved title, recording a 21-save shutout.

"Playoffs are the best time of the year for a reason," said Fitzgerald after the game. "High-fun, high-pressure situations, low-scoring game... those are the best games to be in."

Harrison Browne became just the second player in league history to win two Isobel Cup championships after capturing the title with the Beauts last season, and now the Riveters.

"You can't ask for a better game than that," he said after the win. "I can't believe it. It's an unreal feeling. I saw my name on that trophy, and to see my chosen name, it's absolutely amazing," Browne added.

Looking ahead, NWHL free agency opens on June 1. Interested players can register here. There's also the draft to look forward to, though the date for that is unknown at this time.

Stay tuned for recaps of all four NWHL teams' seasons in the coming days here at The Victory Press.