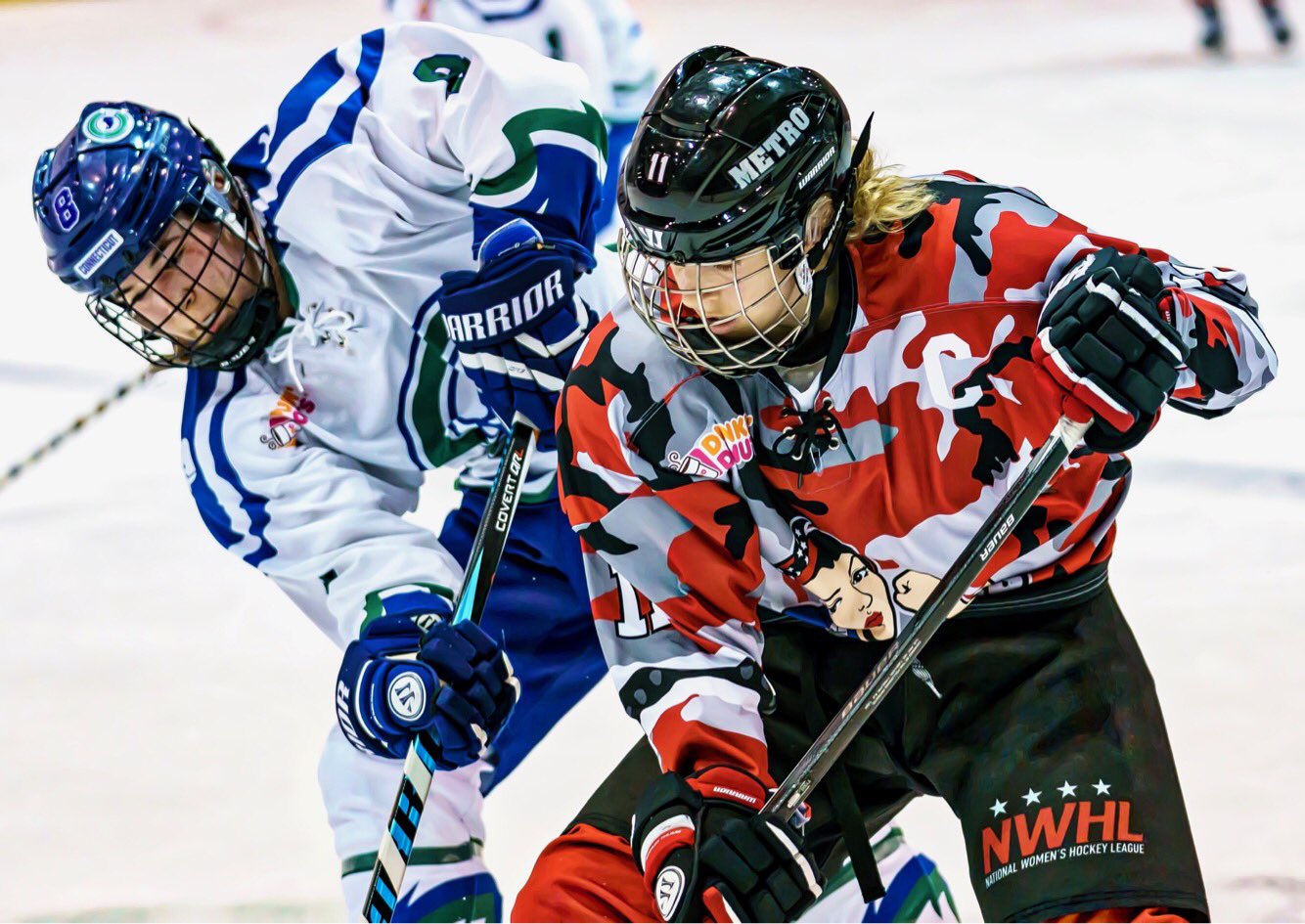 First place in the NWHL is still up for grabs, as both the Metropolitan Riveters and Buffalo Beauts won this weekend. The Riveters are six points ahead of Buffalo; each team has three games left -- two of which are matchups against each other.

The Riveters held the Whale to just one power play goal on five opportunities, and scored twice on their own advantages, to take a 4-2 win.

Just over five minutes in, Kaycie Anderson headed to the box, giving the Riveters their second power-play chance of the afternoon. Metro took advantage with Courtney Burke potting her second goal of the season to put her team up 1-0.

Metro held to that lead for about ten minutes of game action before Amanda Boulier tied the game before the end of the first period.

Bray Ketchum put the Riveters up once again in the second period, but Kelly Babstock did what she does best and tied it once again, early in the third.

Metro then scored two unanswered goals, including a power-play tally and a late goal by Alexa Gruschow, to seal the 4-2 win. Gruschow's goal was her league-leading ninth of the season. She also leads the NWHL with 21 points.

Connecticut's Emily Fluke was handed a 10-minute misconduct for unsportsmanlike conduct with just 1:15 to play in the game. The misconduct was a result of her involvement in a seemingly-minor skirmish between Shannon Doyle and Madison Packer.

Katie Fitzgerald had 23 saves, while Sydney Rossman had 19.

The Buffalo Beauts have now won seven straight games with a 6-2 victory over the Boston Pride Sunday afternoon. Buffalo hasn't lost since December 10.

The Beauts came out to a strong start, scoring four goals in the first 12:50 of the game. Kristin Lewicki opened the scoring 2:27 in, stuffing in a bouncing puck after Boston netminder Brianna Laing had trouble covering it up.

Maddie Elia made it 2-0 just over five minutes later, spinning around in front of the net and slamming it into the top corner.

Hayley Scamurra scored her fifth of the season halfway through the period, while longtime Beaut Kourtney Kunichika added a power-play tally two and a half minutes later. Kunihcika's 12 points are top on her team, while Scamurra and Elia each have 11 points on the season.

The Pride, missing Brittany Ott who was on her way to South Korea, started Laing in net, but she was pulled after the Beauts' third goal, allowing Madison Litchfield to see some action.

The Pride notched their first of the game in the second period, with Emily Field getting her team on the board less than five minutes in. Buffalo's Kaylyn Schroka, however, restored the four-goal lead with under nine minutes to play in the period.

Pride captain Jillian Dempsey closed the gap once again, scoring with just 58 seconds to play in the middle frame. The Beauts held strong in the third period, something they've struggled with this season, and Rebecca Vint added a power-play goal to seal the 6-2 win.

Amanda Leveille had 20 saves in the win. For Boston, Laing had three saves on six shots faced; Litchfield stopped 16 of 19 faced.

The NWHL closes out the month of February with all four teams in action on Sunday, February 25.

The Pride visit the Whale for a 2:30 PM Eastern puck drop at Terry Conners Ice Rink, while the top two teams in the league battle it out in Newark as the Riveters host the Beauts for a 3:00 PM Eastern faceoff. The Beauts/Riveters game will be the Twitter Game of the Week.