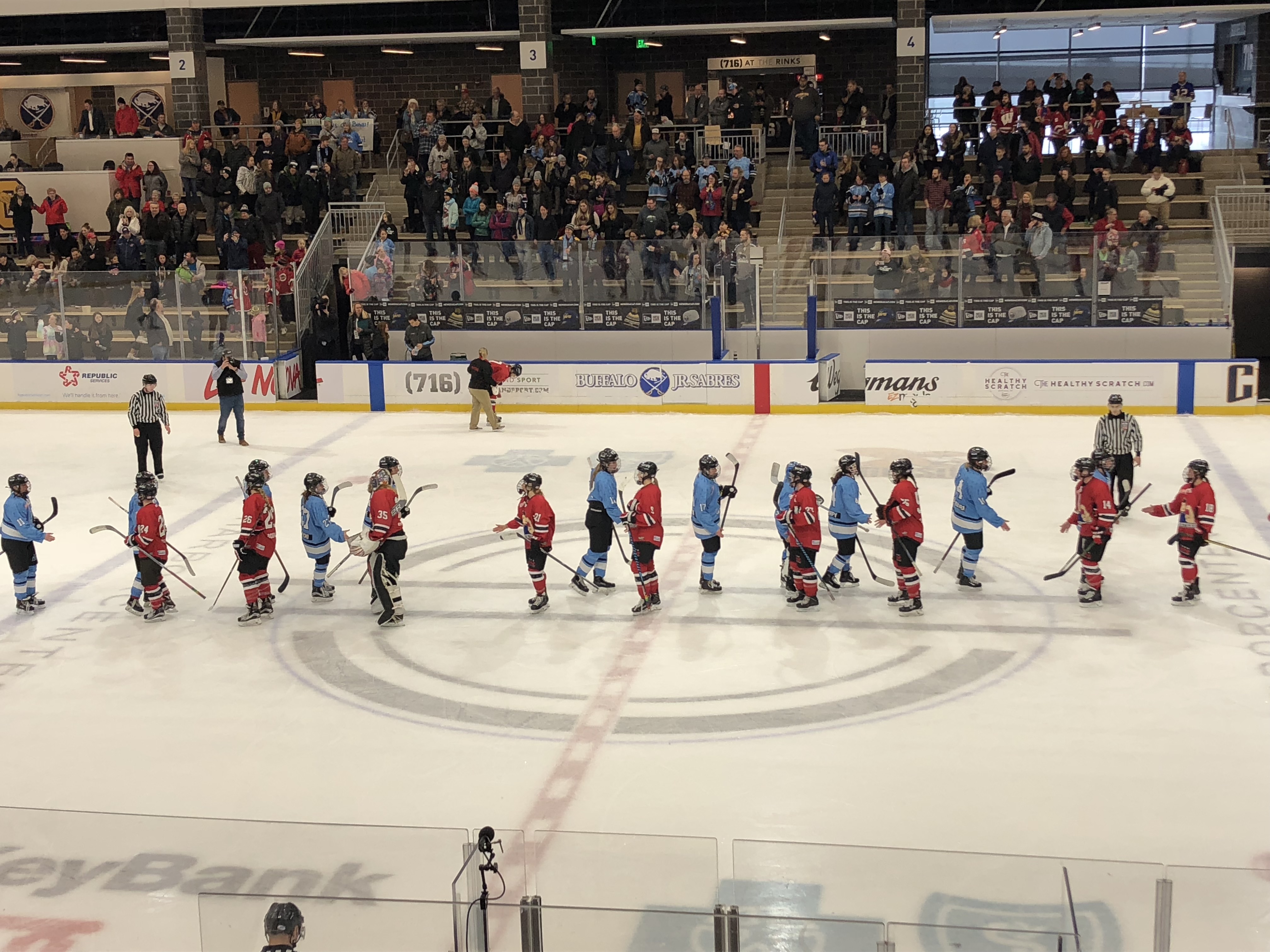 For the first time in 323 days, the NWHL's Metropolitan Riveters skated off the ice following a regular-season game as the losing team. Their 5-3 loss to the Buffalo Beauts on Saturday ended the team's unbeaten streak at 11 games.

As the Riveters' streak ended, the Beauts extended their own winning streak to six games. Meanwhile, on Friday, the Connecticut Whale ended a seven-game losing streak with a 3-2 victory over the Boston Pride.

Heading into the league's all-star break, the Riveters sit atop the league with 22 points, ahead of Buffalo's 16. Both teams have clinched home playoff games. The Whale and Pride each have eight points on the season.

Both teams headed into Friday evening's matchup looking to end a losing streak, but in the end, only the Whale would succeed. The Pride have now lost six consecutive games.

The Pride stepped out to an early lead, as Sydney Daniels put her team on the board. Daniels just returned to game action after being on injured reserve for the past three months.

Jordan Brickner tied the game later in the first period, and the teams skated off after a fairly even twenty minutes knotted up at one.

Daniels scored her second of the game early in the second period, but once again, Connecticut tied it. Jamie Goldsmith evened the score with just over five minutes to play in the middle frame.

Following a scoreless third period, the teams headed to overtime, which would also prove fruitless. It took five rounds of shootout before Emily Fluke scored the game-winning goal to end her team's winless drought.

Just as one losing streak ended Friday, one winning streak was bound to end Saturday. After a closely-matched forty minutes of play, the Beauts opened things up in the third period to capture the win.

"I was just really proud of our effort. I thought that was one of our best games this season," said Hayley Scamurra, one of the Beauts' goalscorers, following the victory.

The Riveters opened the scoring late in the first period, with Madison Packer notching her first of two on the afternoon. Packer's goal was briefly debated as the officials determined if it crossed the goal line; they ruled that it did, and Metro took a 1-0 lead.

With just about two minutes to play in the period, Buffalo's Rebecca Vint headed to the penalty box, leaving her team shorthanded. It didn't matter, however, as Hayley Scamurra picked up the puck on a shorthanded rush and got the Beauts on the board.

The second period was another evenly-matched period, as both teams struck on the power play. Beauts captain Corinne Buie scored just a few minutes before Packer got her second of the game.

When the third period opened, it was all Beauts. Maddie Elia tapped it in the side of the net to put Buffalo up 3-2, and they never looked back. Kaylyn Schroka added a shorthanded goal, the Beauts' second of the game, six minutes later.

Kristen Lewicki made it 5-2 off a pass from Kourtney Kunichika behind the net. Harrison Browne added a goal for the Riveters, but Buffalo ultimately came out on top. Katie Fitzgerald had 22 saves, while Amanda Leveille had 30 in the win.

"We can't ever take them lightly," Seiling said of the Riveters.

"They're a very solid hockey team. They play hard. Just because we beat them once doesn't mean they're going to fall off the throne," Seiling added.

Five of the eight goals scored in Saturday's game were scored on either the power play or shorthanded.

"I think games are won or lost by special teams," Scamurra said.

The NWHL now takes a week off from regular season action for its All-Star Weekend in Minnesota. Stay tuned for a preview mid-week.

Teams return to regular season action on February 18 with all four teams in action. The Whale and Riveters face off at 1:30 PM Eastern, with the Beauts visiting the Pride at 2:30 PM Eastern.